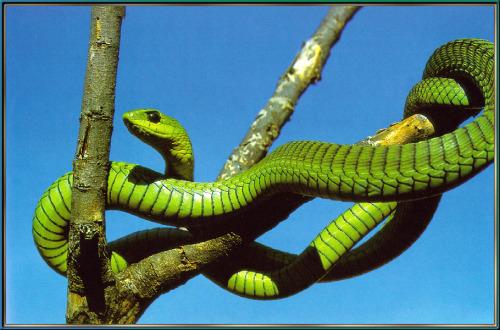 The boomslang ( "tree snake" ) is one of the most interesting snakes in the world, both in terms of appearance and behavior. It is a rear-fanged member of the Colubridae family that inhabits much of the African continent. 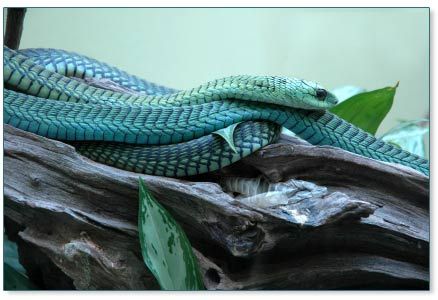 Boomslangs are diurnal and largely arboreal. Their diet includes chameleons and other arboreal lizards, frogs, and occasionally small mammals, birds, and eggs from nesting birds,all of which they swallow whole. During cool weather, they will hibernate for moderate periods, often curling up inside the enclosed nests of birds such as weavers.

boomslang may open their jaws 90 degrees when biting. The venom of the boomslang is primarily a hemotoxin; it disables the blood clotting process and the victim may well die as a result of internal and external bleeding. Other signs and symptoms include headache, nausea, sleepiness and mental disorders.​