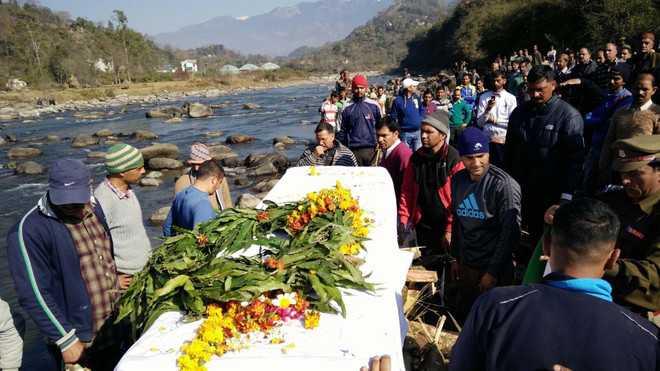 The mortal remains of Raj Kumar Rana, a CRPF jawan who sacrificed his life while fighting militants in Kashmir yesterday, were consigned to flames with full state and military honours at his native Bhararoo village, six km from here, this afternoon.
Earlier, the body of Raj Kumar was brought to his native village by a group of senior CRPF and state police personnel. Thousands of villagers from the adjoining villages started reaching the village since morning to pay their last respects to the martyr.
Senior CRPF officials, including DIG S S Gohar and Commandant K L Dhiman, and district administration officials, including SDM Rahul Chauhan, were present. Gun salute was given by the Army, Police and CRPF jawans as a mark of honor to the martyred Rajesh Kumar Rana. Several leaders, including Mandi BJP MP Ram Sarup, Jogindernagar MLA Gulab Singh Thakur, prominent persons and a large number if locals also paid their last respects to the martyr.
Angashikha, 13-year-old daughter of Raj Kumar, and his elder brother Tej Singh lit the funeral pyre amid chanting of “Raj Kumar amar rahe”. Tej Singh said Raj’s two minor daughters were in deep shock since yesterday after they received a phone call about the killing of their father. Raj’s aged grandmother Niharkhu and mother Urmila fell unconscious. Rajesh was the lone bread-earner of the family.
DIG CRPF S S Gohar assured the family that a job would be provided to the elder daughter of the martyr after she turned 18. He said family pension documents would be completed within one week so that same could be released to the family at the earliest.
You must log in or register to reply here.
Share:
Facebook Twitter Pinterest WhatsApp Link
Top