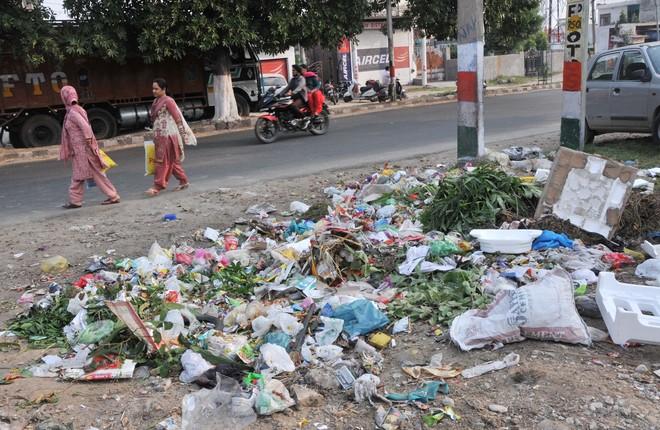 Even after several campaigns launched by the Jammu Municipal Corporation (JMC) under the Swachh Bharat Abhiyan (SBA), the city presents a “dirty look” as failure of the municipal bodies and poor civic sense among residents has turned the winter capital of J&K into a huge garbage dump. The hype and photo sessions during the campaigns launched by the Municipal Corporation have failed to make an impact on ground.
The city already ranks 427th, lowest in India, when it comes to cleanliness, which exposes poor planning and lack of interest shown by the government bodies to coordinate their efforts to involve people in sanitation and take strict action against those who violate cleanliness rules.
Jammu with an estimated population of 15 lakh people generates 400 tonnes of solid waste daily and half of it is not lifted due to manpower shortage and in the absence of suitable dumping ground. Further there is no regular removal of solid waste generated by eateries and restaurants spread across the city.
“The money spent by the MC on media advertisements should be better utilised to engage more safai karamcharies and equipment. There is a need to impose fine on the people who dump their waste on roadsides. Addressing press conferences and rallies is not a solution,” said Sunil Sharma, a resident of Resham Ghar Colony.
Heaps of garbage, stagnant water and blocked drains in every part of the city tell a tale of neglect and indifferent attitude of the authorities and residents, who dump the waste on roads without giving any consideration to the affect on the image of the city. The city, spread in an area of 117 sq km, is comprised of 71 wards, managed by the Jammu Municipal Corporation (JMC).
Municipal Commissioner Mandeep Kour could not be contacted for comments.
A senior municipal official said a week-long cleanliness drive would be launched across the state from November 12. Recently Chief Minister Mufti Mohammad Sayeed had also pointed towards the poor response to the cleanliness drive and its impact in the capital cities of the state.
Heaps of garbage are everywhere in the city, especially the areas where Matadors, auto-rickshaws and private vehicles are parked.
You must log in or register to reply here.
Similar threads
29% Of The Toilets Built Under Swachh Bharat Do Not Exist, While 36% Unusable: Survey
Narendra Modi Inspires A Wave Of Volunteers To Realize Swachh Bharat
Swachh Sea : Floods In Chennai Have Exposed The Trash Chennaiites Generate
Swachh cess: Eating out, calls get costlier
Punjab News Sukhpal Khaira ਦਾ Bharat Bhushan Ashu 'ਤੇ ਵੱਡਾ ਹਮਲਾ
Share:
Facebook Twitter Pinterest WhatsApp Link
Top