The Jaguar XJ is here! Deliveries for the premium luxury sedan from the British car manufacturer have begun in India, with affluent buyers wanting to break away from the typical brigade of German luxury sedans, which include the likes of the Mercedes-Benz S-Class, the BMW 7-Series and the Audi A8 and side with Jaguar's aggressive and sporty image. Prices of the new car incidentally begin from Rs 85.05 lakh (ex-showroom Mumbai) for the stretched out Portfolio variant, powered by a naturally aspirated 5-litre V8 engine.

Jaguar has been on a major makeover spree that has been spearheaded by the sensuous XK and XF models - till now. The iconic British marque then launched what will be the revitalised company's four-door flagship. This is a car that bears a history of pride - the all-new XJ. The XJ is a culmination of Jaguar's new design philosophy that has led the revival of what was a diminishing brand. The new design theme is a modern interpretation of the quintessential Jaguar keeping the XJ as recognisable as any of the older models that came before it.

Jaguar has made the activity of driving the XJ more like a living-at-home experience with loads of technology bottled up in the cabin. 12.3 high definition virtual instruments complimenting a 8-inch dual view touchscreen allow the passenger to enjoy DVD movies while the driver gets to access vehicle information or the navigation system. The XJ gets a top-of-the-line 1200W Bowers & Wilkins audio system along with hard-drive based audio and navigation and comprehensive connectivity for portable audio and video devices via the powerful Media Hub. 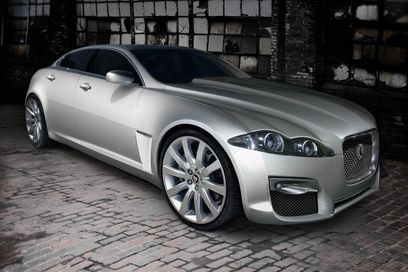 Elevating all that style to heights of scintillating performance are a wide choice of engines that range from the 3 litre V6 diesel to 5 litre naturally aspirated and 5 litre supercharged V8s. In addition to these, the XJ will also have a 470 horsepower version of the supercharged V8 for those who want a little extra oomph under the bonnet. Making the act of putting all that power to tarmac a pleasurable one are a host of Jaguar's techno-wizardries - air suspension, adaptive dynamics (continuously variable damping), active differential control and quick ratio power steering.


The Jaguar XJ is not just about sheer opulence and performance - it is environment friendly too. The engines are fuel efficient and the car is manufactured using Jaguar's aerospace inspired aluminium body technology. With 50% recycled material used and a lifecycle approach to its manufacturing process, the XJ has a minimal carbon footprint. The XJ is the latest brick in the new Jaguar wall of uncompromising vehicles that are luxurious and sporty, powerful and refined.