Surajkund mela off to colourful start 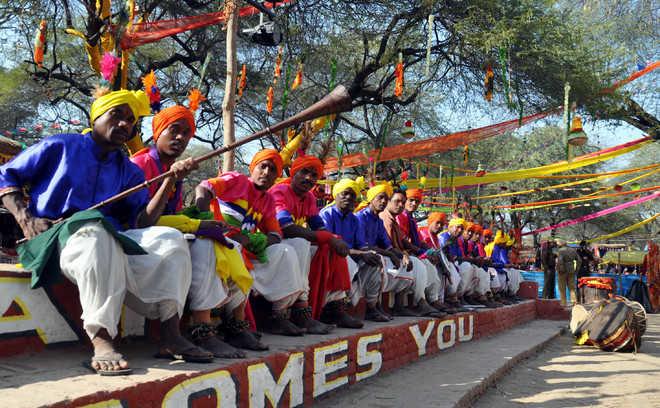 The 30th edition of the Surajkund International Crafts Mela got off to a colourful start today amid presentations by groups of folk artistes.
Chief Minister Manohar Lal Khattar inaugurated the fair in the presence of dignitaries, including Union Tourism Minister Mahesh Sharma, Railway Minister Suresh Prabhu and actor Dharmendra.
With China and Japan as focus countries, the mela has Telangana as the theme state this time. Nearly 2,000 artisans are participating in the fortnight-long fair.
Khattar said, “The mela has not only given an international identity to Surajkund, but has also become a much-awaited event.”
The state government, he said, was working on an ambitious project of developing a tourism circuit in the state, which he claimed had an ample potential.
“Haryana, being a land of diversity, has Shivaliks in the north and Aravallis in the south; between the two ends lie the land (Kurukshetra) of Mahabharata. This provides an opportunity for developing a tourist circuit.”
China’s Wanda company has expressed interest in investing around Rs 60,000 crore to develop a township and a permanent tourist spot over 3,000 acres in the state.
“The passage between Kalesar of Yamunanagar and Kalka of Panchkula provides a good scope,” the Chief Minister said.
On the “Beti Bachao, Beti Padhao” programme, he said Haryana had achieved a new mark in terms of sex ratio. “Prime Minister Narendra Modi mentioning about state’s initiative to honour mothers of infant girls on Republic Day during his ‘Mann ki Baat’ has motivate the government. The state will aim to achieve sex ratio of 950 girls against 1,000 boys soon.”
Union Minister Mahesh Sharma talked about a plan of developing 7,500-km-long seaside front of the country as a hub of tourism.
He admitted the tourism sector had a small share in the GDP. “There are ample prospects of developing eco, golf and rural-based tourism sector. The Centre is making efforts to increase the country’s share in international tourism to 1 per cent from 0.68 per cent of the world’s total.”
Railway Minister Suresh Prabhu said that the railways would launch plans to boost tourism. Actor Dharmendra, who is the brand ambassador for Haryana Tourism, said the Surajkund fair had boosted the state’s image at the national and international level.
You must log in or register to reply here.
Similar threads