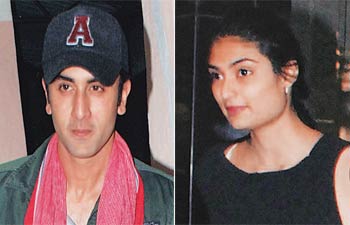 There is a new star kid in B-Town raring to take the showbiz plunge. Suniel Shetty's daughter Athiya, all of 18, is making heads turn with her traffic-stopper looks and the buzz is that it is only a matter of time before she makes her Bollywood debut.
"Athiya has suddenly become visible all over the swish circuit. It should be at least a year or so before she hits the screen, but it seems only a matter of time," a regular party-hopper in Mumbai said.
The buzz about Athiya gearing up for a Bollywood debut has also gained ground because dad Suniel was spotted having a chat with Ranbir Kapoor a few days ago. Suniel was busy with his upcoming film, Mere Dost Picture Abhi Baaki Hai, and Ranbir happened to be in the area. He dropped in and the two actors were seen talking for quite some time.
"Ranbir is the best bet for a debut for any new girl in Bollywood. The rumour is that Athiya could be making her debut opposite the actor, once he is through with his current lot of assignments at hand. A big announcement seems on the anvil," a source said.
The timing would be perfect for Athiya, too. Ranbir is right now wrapping up Anurag Basu's Barfee and is also shooting for Ayan Mukerji's Yeh Jawaani Hai Deewani. After this, his next film, Abhinav Kashyap's Besharam, goes on floor. He will also be working on Anurag Kashyap's Bombay Velvet around the time - which means Ranbir would sign a new biggie only around the middle of next year. If Athiya indeed signs a film with him, she would be seen on the screen in 2014," the source said.
Athiya recently returned from the US after finishing a course in filmmaking and liberal arts at the New York Film Academy. Two years ago, Suniel and his wife Mana had visited the US to choose the best university for their daughter's admission. Reported to be strict parents, the Shettys were extremely watchful about their daughter's education. Now that she is back, they are said to be planning Athiya's Bollywood career. Lately, she has been spotted at several film parties along with her parents.
Unlike Sanjay Dutt, who has categorically put a ban on his daughter Trishala's entry into Bollywood, the buzz is that Suniel has been encouraging his daughter's starry dreams.
"He does not have any problems with his daughter joining Bollywood. Athiya is yet to sign a film, but her debut will probably happen around a year later. Suniel might even produce a film to launch Athiya, but he first wants her to spend time watching and understanding the way Bollywood functions," said a source close to the Shettys.
However, the source underplayed the meeting between Suniel and Ranbir and said: "Suniel was shooting at the same place where Ranbir happened to be doing some promotional activity for Barfee. So he dropped in to have a casual chat."