As many as 60,000 people a year die from too much sun, mostly from malignant skin cancer, the World Health Organisation reported.
It found that 48,000 deaths every year are caused by malignant melanomas, and 12,000 by other kinds of skin cancer.

About 90 per cent of such cancers are caused by ultraviolet light from the sun.
Radiation from the sun also causes often serious sunburn, skin aging, eye cataracts, pterygium a fleshy growth on the surface of the eye, cold sores and other ills, according to the report, the first to detail the global effects of sun exposure.
"We all need some sun, but too much sun can be dangerous and even deadly. Fortunately, diseases from UV such as malignant melanomas, other skin cancers and cataracts are almost entirely preventable through simple protective measures," Dr Maria Neira, Director for Public Health and the Environment at WHO, said in a statement.
Ultraviolet light is needed to activate production of vitamin D in the body, which prevents rickets, osteomalacia and osteoporosis. It may also affect some cancers and immune disorders.
The report, available on the internet at http://www.who.int/uv, advises that people seek shade, use sunscreen with an SPF of at least 15, and stay out of tanning salons.
"The application of sunscreens should not be used to prolong sun exposure but rather to protect the skin when exposure is unavoidable," the report advises.
Snow, sand and sea foam reflect ultraviolet light, the report notes, and thinning ozone filters out less and less of it.
"Ultraviolet radiation can neither be seen nor felt," the study noted. Time of day, latitude and cloud cover all affect the amount of radiation reaching the ground.
"A person's skin type is also important. Fair skinned people suffer from sunburn much more readily than dark-skinned people," WHO said in a statement.

But it detailed ill effects from too much sun around the globe, especially cataracts in Africa, Latin America, the Middle East and Southeast Asia.
Prevention: WHO recommendations
Limit time in the midday sun The sun's UV rays are the strongest between 10am and 4pm. To the extent possible, limit exposure to the sun during these hours.
Use shade wisely Seek shade when UV rays are the most intense, but keep in mind that shade structures such as trees, umbrellas or canopies do not offer complete sun protection. Remember the shadow rule: "Watch your shadow Short shadow, seek shade!"
Wear protective clothing A hat with a wide brim offers good sun protection for your eyes, ears, face, and the back or your neck.

Sunglasses that provide 99 to 100 per cent UV-A and UV-B protection will greatly reduce eye damage from sun exposure. Tightly woven, loose fitting clothes will provide additional protection from the sun.
Use sunscreen Apply a broad-spectrum sunscreen of SPF 15+ liberally and re-apply every two hours, or after working, swimming, playing or exercising outdoors.
Avoid sunlamps and tanning parlours Sunbeds damage the skin and eyes, and are best avoided entirely.
Protect children Children are generally more susceptible to environmental hazards than adults. During outdoor activities, they should be protected from high UV exposure as above, and babies should always remain in the shade.

How the ninth planet came to be named


Every once in a while a science story comes along that absolutely astonishes me. Sometimes it astonishes me because it represents a giant advancement in human knowledge. And sometimes it astonishes me because it represents a giant gap in human knowledge ... specifically, mine.
Such a story is one I stumbled on this week, concerning Venetia Phair (nee Burney), an 87-year-old retired teacher in Epsom, England ... and the only person alive to have named one of the solar system's nine planets: she came up with the name Pluto for the outermost planet when she was an 11-year-old schoolgirl in Oxford.
In a January interview with NASA Public Affairs, in honour of the then-impending launch of the New Horizons spacecraft, now en route to a 2015 fly-past of Pluto, Venetia explained.
"I think it was on March 14, 1930, and I was having breakfast with my mother and my grandfather," she said. "And my grandfather read out at breakfast the great news (of the discovery of Pluto) and said he wondered what it would be called. And for some reason, I after a short pause, said, 'Why not call it Pluto?' "
Venetia was familiar with Greek and Roman legends from children books and also knew the names of the other planets. "I suppose I just though that this was a name that hadn't been used. And there it was."
Of course, lots of children say things over the breakfast table that don't make it onto a map of the heavens. Most children, however, don't have as their grandfather Falconer Madan, a retired librarian of Oxford University's Bodleian Library. Madan, impressed by Venetia's suggestion, dropped by the house of Herbert Hall Turner, a friend of his and a professor of astronomy at Oxford.
Ironically, Turner missed Madan: he was at a meeting of the Royal Astronomical Society in London where everyone was wondering what the new planet would be called. (Fortunately for Venetia, none of them came up with Pluto.)
When Turner finally heard the suggestion from Madan, he sent a telegram to the Lowell Observatory in Flagstaff, Ariz., where Clyde Tombaugh had discovered the planet. On May 1, 1930, the name Pluto was formally adopted, not only because it was one of the few notable names from classical mythology that had yet to be used but also because the first two letters were the initials of the late Percival Lowell -- after whom the Lowell Observatory was named, and who, along with William Pickering, had predicted the existence of a planet outside Neptune's orbit, but never saw it.
Madan awarded Venetia a five-pound note. "As a grandfather, he liked to have an excuse for generosity," Venetia told the BBC. She also made sure the BBC knew that Disney's cartoon dog named Pluto had nothing to do with her suggestion: "People were repeatedly saying: 'Ah, she named it after Pluto the dog.' It has now been satisfactorily proven that the dog was named after the palonet, rather than the other way round. So, one is vindicated."
The launch of the New Horizons mission has probably gotten Venetia more publicity than she received 76 years ago. "I think the newspapers were mostly occupied by the exploits of the woman pilot Amy Johnson (first woman to fly solo from Britain to Australia) at the time," she told NASA. "My grandfather collected any information there was through a press agency and put it into two scrapbooks that I have, which I treasure."
Venetia recently received a badge from Johns Hopkins University and has had an asteroid and a scientific instrument named after her. But she's never seen Pluto, although she has visited the Lowell Observatory and saw the telescope through which Tombaugh first saw the planet.
It's a great story, isn't it? But perhaps I can be forgiven for not having heard of it until now.
As Venetia herself told NASA, "On the whole, it doesn't arise in conversation, and you don't just go around telling people that you named Pluto."
- Edward Willett is a Regina freelance writer. E-mail comments or questions to edward@edwardwillett.com. Read this and past columns online at www.edwardwillett.com or edwardwillett.blogspot.com. 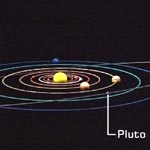 New observations: Scientists think the planet may be warming, rather than cooling. [File photo] (ABC TV)

Pluto thought to be warming up

Astronomers at the University of Tasmania have found that the solar system's smallest planet is not getting colder as first thought and it probably does not have rings.
Dr John Greenhill has collected observations from last month's event when Pluto passed in front of a bright star, making it easier to study.
French scientists have shared the measurements they took in Tasmania that night, which indicate that the planet is unlikely to have rings.
Dr Greenhill says the results are surprising because they show Pluto is warming up.
"It looks as though the atmosphere has not changed from 2002, which is pretty surprising because we expected the atmosphere would freeze out as the planet moved further away from the Sun," he said.
"But so far, if anything, the atmosphere has gotten even denser."
You must log in or register to reply here.
Similar threads