Subhash or Jinnah? In Bikaner, how a road divides Hindus and Muslims 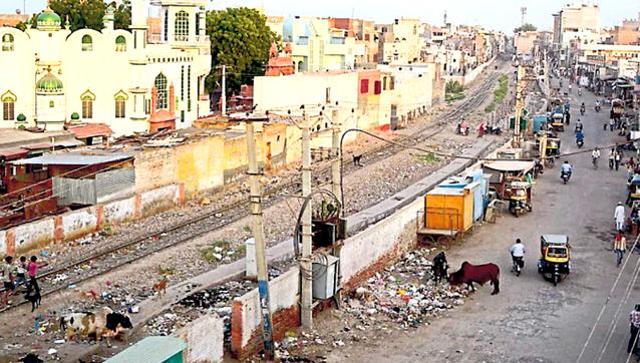 Many historians blame Muhammad Ali Jinnah for the India-Pakistan partition in 1947. Oddly enough, a busy road in Rajasthan’s Bikaner district carries forth his legacy even today – acting as a physical and symbolic divide between the Hindu and Muslim communities.
Naming of roads has always been a matter of great political significance, a fact that became evident when BJP MP Maheish Girri sought the rechristening of Aurangzeb Road in New Delhi to Dr APJ Abdul Kalam Road last year. But nearly 447 km away in Bikaner, a district roughly 20 times the size of the national capital, a 500-metre stretch of road bears a title that’s open to communal interpretation. It’s Jinnah Road for Muslims, and Subhash Road for Hindus.
Running parallel to a railway track, the road gets congested near Kote Gate – one of the many entrances to the erstwhile walled city of Bikaner – as it meanders along dilapidated buildings, fancy hotels, tea stalls, meat shops and the occasional mobile recharge shop.
Former mayor Maqsood Ahmad, who owns a hotel on the road, believes it was named after the Pakistan founder many decades ago in the country’s past. “Poets used to sit here long back, and it was probably they who named the road after Jinnah,” he said, raising his voice to make himself heard over the din of passing vehicles.
Ahmad said though the road was rechristened Subhash Marg in 1967, Jinnah’s name was engrained too firmly in public memory to fade away with time. “Look at the King Edward Memorial Road, for instance. It’s now titled Mahatma Gandhi Marg, but how many people do you ever hear calling it that?” he asked.
Bikaner municipal commissioner Rakesh Jaiswal says that though the stretch is named Subhash Road in official records, most local residents still invoke Jinnah’s name while referring to it. Even Google Maps seems undecided in this regard. It calls the stretch of road extending till Chaukunthi flyover as Jinnah Road, and the rest of the route as Subhash Road.
“When I came here in December 1961, the road was called Jinnah Road,” says 85-year-old Aminuddin, who used to teach history at a government college in Bikaner. “The Muslims living in the area may have named the road after Jinnah because they believed he was their leader.”
Aminuddin says the stretch is still known as Jinnah Road near Kote Gate, where the concentration of Muslims is high, and Subhash Road on the other end – which enjoys a Hindu majority. “Interestingly, neither Jinnah nor Subhash (Chandra Bose) ever came to Bikaner,” he points out.
Sikar Ram, a fifth-generation resident of the area, recalls how a veterinarian staged a sit-in outside the municipal office eight years ago to demand that ‘Subhash Road’ signages be placed on both ends of the road. The administrations gave in, but the signages didn’t last long. While Ram alleges that Muslim residents of the area removed them, the latter claim they may have been discarded over the years to make way for traffic.
Local residents, however, proudly proclaim that the road has never witnessed a clash between the two communities. The people here have co-existed amicably for decades now, no matter which religion they belong to.
You must log in or register to reply here.
Similar threads