SRI GURU GRANTH SAHIB - The Living Guru of the Sikhs 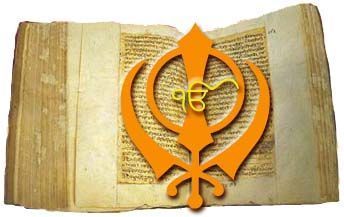 ​
Compilation of Guru Granth Sahib. Guru Arjan gave a central place of worship to the Sikhs in Harmandir Sahib. What now he wanted was a scripture for the Sikhs. So he collected from Bhai Mohan, the son of Guru Amar Das, the hymns of the first three Gurus and some Bhagats, and added to them the compositions of his father Guru Ramdas, and his own. He got the Adi Granth written by Bhai Gurdas. Guru Arjan gave the copy to Bhai Bano for binding. He took it for binding to Lahore and on the way prepared a copy. This is known as Bhai Bano's copy. Guru Arjan got the original after binding. He installed the Holy Book at Harmandir Sahib in 1604. Baba Buddha was appointed as its first Granthi or keeper. This copy passed into custody of Bhai Dhirmal, son of Guru Hargobind, who refused to give it to the Guru. Subsequently some Sikhs brought this copy to the ninth Guru who returned it to Dhirmal. It is said that Guru Gobind Singh stayed at Damdama Sahib for nine months in 1706 and dictated the whole Adi Granth to Bhai Mani Singh. Undoubtedly, the Guru expunged certain unauthorised pieces which had crept into some pirated copies and gave it a final form.

Gurbani and Bhagatbani. The major principle of compilation was that verses which praised God and denounced superstition and caste were to be included in the Holy Book. As regards the compositions of Bhagats, generally the same principle was observed. Guru Arjan included the verses of those who believed in the unity of God and brotherhood of man.

The Granth Sahib was to be broadbased. It could contain with itself principles of mono-theism and the Bhakti cult. No puristic or linguistic tests were applied to the compositions. Foreign words, coined words and current words were put into this literary dish. In selecting the musical scores-Ragas, the Guru employed homely and simple metaphors. Gene-rally speaking, hymns of devotion, the glory of God, men's spiritual efforts and equality of men and women were incorported in the Holy Book.

Music forms the basis of the classification of the hymns. Under each Rag, the hymns are arranged in the following order :

1. Chaupadas-hymns of four verses.
2. Ashtapadas-hymns of eight verses.
3. Long poems.
4. Chhants-Verses of six lines.
5. Short poems.
6. Vars consisting of two or more Saloks and a Pauri.
7. Poems of Bhagats in the same order.
The hymns are further classified according to the musical clef (Ghar) in which each is to be sung. Although according to the index of Ragas in Ragmala, the total number of Ragas and Raginis is 84, the Guru has used only 31. So the Granth is arranged firstly according to the Raga, secondly, according to the nature or metre of the poem, thirdly authorship, and fourthly the clef . The ordinary edition of Adi Granth Sahib contains 1430 pages as under :

Characteristics of Adi Granlh. At the end, Guru Arjan Dev has summed up the nature of the Holy Book in Munda-wani; "In this dish are placed three things : Truth, Contentment and Wisdom. These are seasoned with the Name of God which is the basis of all; whoever eats and enjoy it, shall be saved." Guru Arjan's aim was to provide a book of universal religion, for everybody, everywhere. He wanted to guide and regenerate all types of men. He says:

"It is a thing which you cannot afford to neglect.You must take it to your hearts." The Guru Granth Sahib is both metaphysics and ethics, the science of reality and the art of union with Reality. It gives us a vision of truth, and it opens up new paths for the mind of man. It is a work of divine inspiration, primarily spiritual and incidentally philosophical. It is a collection of devotional poems and prayers. The Gurus accept certain fundamentals laws like Karma, cycle of birth and death, Maya etcetera. Guru Arjan incorporated the hymns of some Bhagats who subscribed to the unity of God and the cult of Bhagti. Such hymns enshrine the essence of four centuries (thirteenth to sixteenth) of Indian thought in simple but telling words. Moreover the verses are set to appropriate musical scores.

The Guru Granth Sahib is an authentic scripture. The compositions of the Sikh Gurus were preserved, and subsequently collected by Guru Arjan. When the original copy (which is now at Kartarpur) could not be obtained. Guru Gobind Singh dictated it to Bhai Mani Singh.

Guru Arjan Sahib who com-piled it ,installed it with all reverence and devotion at Harmandir Sahib, Amritsar in 1604. He emphasised the importance of this Guru Granth Sahib in the following shabad (hymn): The race of man is saved !

God's word goes to the people, blessing them
And bestowing immortality on them.
My house is full of the light
Of the song of life to-day!
This is the staff on which
The old and the miserable, the strayed and rich shall lean
In their distress, and obtain solace,
People of God ! come, assemble, live in this light
Dissolve this song into your soul.
Rejoice and partake of this immortal feast.

The Granth contains Gurbani or the Guru's teaching. It is the Guru incarnate. Guru Gobind Singh installed Guru Granth Sahib as the timeless Guru. Guru Granth Sahib is a sort of living Guru in the midst of the Sikhs. Guru means guide or torchbearer. Guru Granth Sahib gives light and good counsel. Those who are in difficulty or trouble read Guru Granth Sahib and obtain solace and comfort from its hymns. It is used by the sikhs at the time of birth, marriage and death.

Guru Granth Sahib is regarded as the body of the Guru and is kept on a raised platform under a canopy, covered in clean clothes. A Pauri is waved over it when it is read. One must put off one's shoes, wash the feet and cover the head before taking one's seat before the Guru. This is a mode of reverence and no idolatory. The service of the Guru is following his instructions and yoking the mind to the Name.

Guru Granth Sahib is a treasure of divine knowledge and mysticism. Guru Nanak says, My mind is a temple of love. My body is a robe divine. The Sacred Nectar flows in the temple. The Word is my breath and the Song is My blood." It is therefore in the fitness of things that both Sikhs and non-Sikhs show great respect to Guru Granth Sahib.

Punjabi language is said to have emerged from Apbhransh about 1000 A.D. In the twelfth century, Baba Farid wrote his saloks in Lehndi dialect. During the next three centuries, India was attacked by muslim adventurers and, therefore, heroic verses known as Vars became popular. During this period, the Yogis developed a dialect of their own which was called the saint-language and contained terms of systems of Indian philoso-phy. There was very little literature worth the name before the Sikh Gurus. Moreover, Panjabi was regarded as a language of the vulgar by the aristocratic and Brahamanic sections of Hindu society. The Yogis also wrote in the Sanskrit. Some Sanskrit! saloks, are included in Guru Granth Sahib.

The Sikh Gurus preached their principles in the language of the masses. The adopted popular forms of poetry such as salok Chhant, Bara Mahan, Thhittin, Bawan Akhari, Var (heroic ballad). The Var is also a song of praise. The Gurus praised the Name and at the same time denounced egoistic pursuits.

The Sikh Gurus enriched Panjabi literature. The crude and poor language became in their hands a treasury of thoughts. They absorbed the diction of saint-language and current philoso-phies. In Guru Granth Sahib are found words associated with the Vedas, Vedanta, Vaishnavism, Shaivism, Shakatism, Buddhism, Jainism and Islam. Panjabi was also enriched by words of saint-language which owed its origin to Sanskrit. Persian and Arabic words came through Islam.

The Japji, Asa-di- Var of Guru Nanak, the Anand of Guru Amardas, the Sukhmani of Guru Arjan are rightly esteemed as classics of Panjabi literature. The verses of the ninth Guru are included in the Guru Granth Sahib. Formalism and ritualism of Hinduism and Islam have been condemned. Great spiritual truths have been illustrated through simple and homely similes. The devotional hymns are full of sincerity and emotion. Guru Nanak's compositions are pithy and pregnant with meaning. He has not only touched spiritual problems but also social and human relationships.

http://www.gurdwaramidhudson.org/sggs.pdf:yes
You must log in or register to reply here.
Similar threads