Spotted Next to Rahul Gandhi, Man Jailed for Hate Speech Against PM Modi 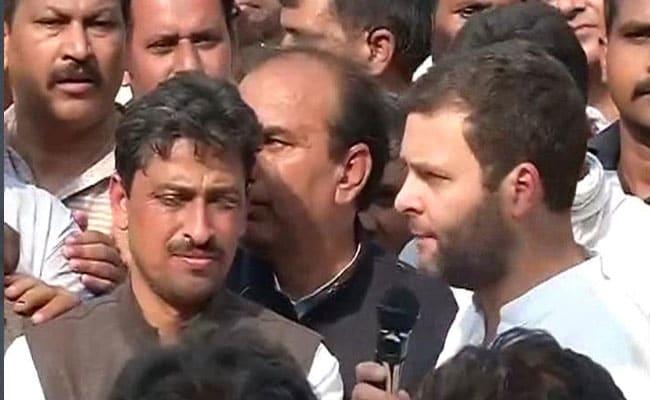 Saharanpur: When Rahul Gandhi launched an attack on Prime Minister Narendra Modi in Uttar Pradesh's Saharanpur today, next to him stood a man who was jailed last year for a hate speech against Mr Modi during the campaign for the national election.

As eyebrows were raised at Imran Masood's presence at Mr Gandhi's padhyatra, the Congressman said, "I am not communal number 1. I have apologised for my mistake. But those in the BJP who have made hate speeches have not apologized."

The Congress had distanced itself from Mr Masood's comments after his arrest in April last year and Rahul Gandhi had in a campaign speech in Saharanpur said he disapproved of the "local candidate using harsh towards about the opposition. This is not the Congress way".

Mr Masood, who was later released on bail, was the Congress candidate from Saharanpur for the national election and lost to candidate fielded by the BJP, which, along with an ally, won 72 of the Uttar Pradesh's 80 seats.

Rahul Gandhi and his mother and Congress president Sonia Gandhi were the only ones from their party who won their elections in the state. Mr Gandhi's padh tour of UP that began today is being seen as an early start for the massive battle that the Uttar Pradesh assembly election in early 2017 will be.

As he attacked Mr Modi, accusing him of going on foreign tours while neglecting the plight of sugarcane farmers back home in UP, Rahul Gandhi also appealed to the state's chief minister Akhilesh Yadav to help them.

After an anti-BJP coalition that included the Congress swept Bihar this month, the strategy is being seen as a possible template in other states to stall the BJP.

The win has also galvanised a united Opposition to take on the BJP-led government in a big way in the coming Winter Session of Parliament, which begins this week.
You must log in or register to reply here.
Similar threads