Some news and pics related to 13/7 Mumbai blasts

What we rebuilt has gone again
Anil Punjabi relives the days following the ’03 attacks and the futility of their resilience.

When he heard the blast just minutes before 7 pm on Wednesday, Anil Punjabi’s heart just sank. Eight years ago, he’d heard a similar blast, only much closer. In 2003, it was a taxi parked right outside his jewellery showroom - Tahilram Tirthdas - opposite Mumbadevi temple. The damage to the building - Navinidhan Bhawan - was so extensive that it had to be completely demolished and rebuilt, the cost shared amongst the occupants.

“We were told the government and BMC would offer some concessions, but not only did we end up doing it ourselves, it seems pointless now to recount the trouble we had maneouvering through all the permissions required and procedures involved,” says Anil.
On Wednesday, when he saw people running outside his shop, in that instant he knew that the horror of 2003 had revisited Zaveri Bazar. After a few moments frozen in fear, Anil, his elder and several of their friends and neighbours, all owners of jewellery shops started rushing towards Khau Galli.

“No action is taken against hawkers. They dump garbage, use gas cylinders on the streets. The government should declare this a no-hawker and no-parking zone. There should be gates to regulate control of people entering and leaving this area. Just a day after the blasts, hundreds of motorcycles are parked here again. Who knows which one has a bomb hidden?” says Ashok. 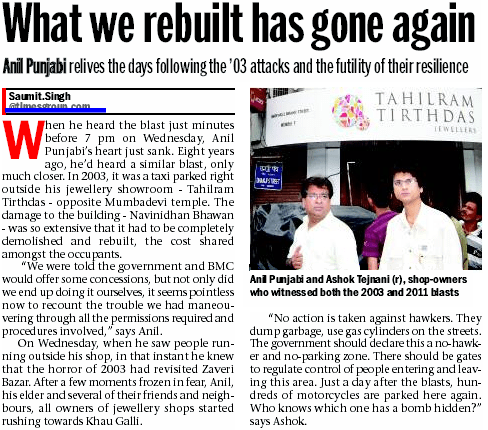 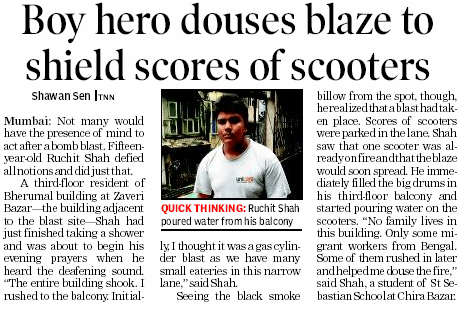 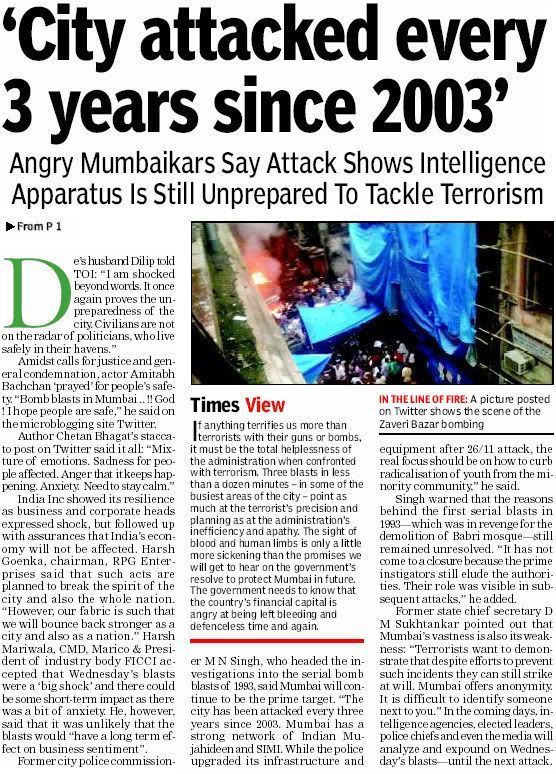 Diamonds worth 25 crore went flying in the air
Mumbai:Amidst the deafening burst of shrapnel that went up when a bomb detonated at Opera House on Wednesday evening, there was something that rained down: diamonds packed in tiny butter paper packets and hidden in secret vest pockets. It was that time of the day when most traders had wrapped up work and were sipping hot tea and chewing mawa before heading to the safety vaults; others had smoothly lined up their gems on red velvet and were taking the last count.
The huge explosion that ripped through the narrow Khau Galli at Opera House has left the diamond community unnerved and singed in more ways than one. Unbelievable as it may seem to the uninitiated, many merchants carry their diamonds on their person—and the blast led to their losing stones worth crores of rupees. “Most of us carry diamonds in our pockets,” says Bharat V Shah, secretary of the Mumbai Diamond Merchants’ Association. “This is how we trade, sometimes under the peepal tree, sometimes at the tea stall. Many people would have lost their diamonds.”

Police return diamonds to traders’ association
16july
The police have returned around 20-25 pieces of diamonds they recovered from the blast site to The Mumbai Diamond Merchants’ Association. Association members have been asked to file their claims with a detailed description of the lost stones 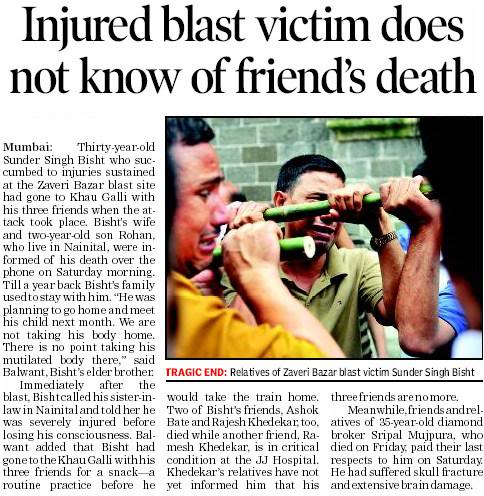 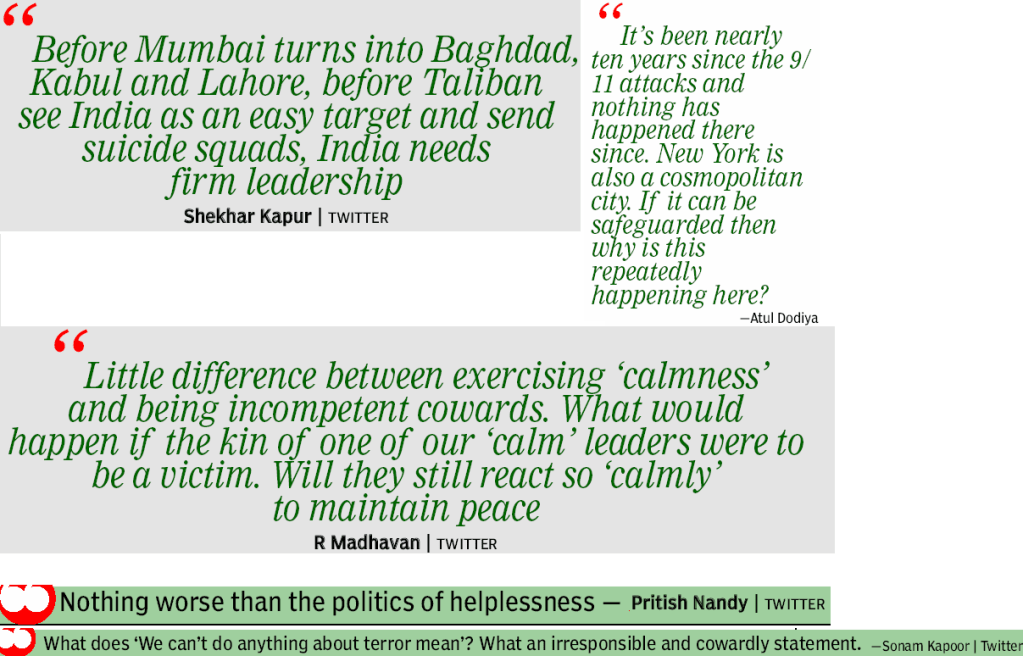 Sentiments like ‘hang Kasab’ to ‘Mumbai should be called BOMBbay’ were expressed on the internet. Author Shobhaa De tweeted: “How many intelligence failures do we need? What ‘intelligence’? Salaam Mumbaikars! Once again we are left to help ourselves.”

Terrorists had the advantage of surprise" - Manmohan Singh
-- Oh puppet PM ,,, nah they will inform u first that we will blast in so and so place..

"Not an intelligence failure'- P Chidambaram
-- Chidu next bomb blast should be happen under urs dhoti then lets see whoz failure it will be then ?

"We stop 99 per cent of the attacks. But one per cent of attacks might get through and that is what I am saying.". .Even americans cant stop blast in iraq and afghanistan - Rahul Gandhi
--Gosh this college drop out raul vinci/rahul gandi said something first time.. but muh khola toh bakwass hi bak di.. what "stop 99% attacks" he talking about ? did he forgot before mumbai blast just a week back there was a train blast in assam too plus the tracks was blow away by huji & ulfa militants & those naxals attacks ! which lead to the crash of the train in which dozens off people died.. Compareing india with iraq and Afghanistan..abe gadhe.. those country have war like situation...Dumb useless guy.

And last but not the least---
"India is better than Pakistan where blasts take place every day, every week.”- Digvijay Singh aka doggy diggy
-- aaahaa here comes the dogy diigy the guru of rahul gandi.This guy have a big filthy mouth..jab bhi khola gutter hi bakta.
i think his Z+security shud be removed nd then he wil xperience dat makin statements with security is as easy as washing his shit,butt wen it comes to him without security dis dog wud nt even cum out of his house..........bloody DOG!!!!
biggest MOFO, ever seen in history of Indian politics! his frustration is evident after losing repeatedly from the state he once ruled... Madhya pradesh.
Last edited: Jul 26, 2011

Soft target: Hapless citizens blast netas & cops
Mumbaikars watched with impotent rage and sorrow as three explosions shook the city between 6.54pm and 7.06pm on Wednesday. People vented their anger at the Mumbai police who seem to be more interested in harassing innocent patrons at a pub;at politicians for their empty rhetoric; and at the unknown faces behind yet another terror attack. Repeatedly hit—more than ten times—since 1993, India’s financial capital has now become the favourite hunting ground for terror outfits.
“Monday was the fifth anniversary of the train blasts. On November 26, we will hold candlelight vigils for the victims of the 26/11 terror strike. How many more anniversaries are we going to observe? Is there no value for human life
in Mumbai?” asked 33-year-old graphic designer Rekha Mehta.
This endless dance with death has unnerved the citizenry amidst fears that Mumbai may go the Karachi way. Pakistan’s port city has been racked by violence and bloodbath over the past few years.
“It looks like a repeat telecast of the same incident, doesn’t it? Politicians have already started the blame game and now the candle vigil marches will begin. The term security no longer has any meaning,” said Ashok Pandit, film producer.
Sentiments like ‘hang Kasab’ to ‘Mumbai should be called BOMBbay’ were expressed on the internet. Author Shobhaa De tweeted: “How many intelligence failures do we need? What ‘intelligence’? Salaam Mumbaikars! Once again we are left to help ourselves.” 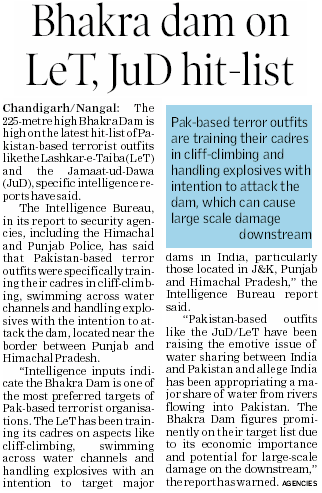 Bhakra dam on LeT, JuD hit-list
Chandigarh/Nangal: The 225-metre high Bhakra Dam is high on the latest hit-list of Pakistan-based terrorist outfits like the Lashkar-e-Taiba (LeT) and the Jamaat-ud-Dawa (JuD), specific intelligence reports have said.
The Intelligence Bureau, in its report to security agencies, including the Himachal and Punjab Police, has said that Pakistan-based terror outfits were specifically training their cadres in cliff-climbing, swimming across water channels and handling explosives with the intention to attack the dam, located near the border between Punjab and Himachal Pradesh.
“Intelligence inputs indicate the Bhakra Dam is one of the most preferred targets of Pak-based terrorist organisations. The LeT has been training its cadres on aspects like cliff-climbing, swimming across water channels and handling explosives with an intention to target major dams in India, particularly those located in J&K, Punjab and Himachal Pradesh,” the Intelligence Bureau report said.
“Pakistan-based outfits like the JuD/LeT have been raising the emotive issue of water sharing between India and Pakistan and allege India has been appropriating a major share of water from rivers flowing into Pakistan. The Bhakra Dam figures prominently on their target list due to its economic importance and potential for large-scale damage on the downstream,” the report has warned 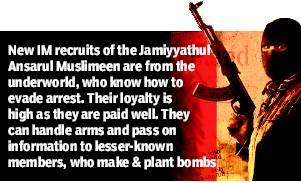 Bangalore: Soon after 26/11, terror outfit Indian Mujahideen appears to have changed its tactics as well as its operatives.
The newly-formed Jamiyyathul Ansarul Muslimeen (JIAM), a hitherto unknown terror outfit whose name cropped up after the 13/7 serial blasts in Mumbai, is just another face of IM, which had gone on a recruitment spree in the past two years.
This was only because its former members were either caught or were on the radar of security agencies.
“Some IM members went underground, with many fleeing to the Middle East. There, they hatch conspiracies to conduct terror attacks. They pump in funds to operatives within the country, who are newly recruited,” said an officer from a central investigating agency.
The tactic is simple. “They don’t want to get caught. Once exposed, they go out of sight and no longer belong to IM. They form a new outfit to outwit agencies and strike again,” the officer said.
Security agencies are now turning the heat on the underworld in Mumbai and the coastal areas of Karnataka, where JIAM has a large following. The coast and the adjoining district of Kasaragod in Kerala are a hotbed of these operatives. Sleeper cells here are working on inducting new recruits. These cells draft new members into the outfit and raise funds.
“There is a continuous supply of funds from abroad, especially the Middle East. They claim they are the neo-jihadis within the country,” said an intelligence officer. “We’ve found some political outfits, which are an extension of People’s Democratic Party founded by Abdul Madani, backing the new India-based terrorists,” said another officer.

never show your agressiveness to minorities....never make any decision on the basis of person's religion as the person above did...give punishment to the culprits and justice to the innocents without considering their religion....these are the few things which are required to bring the feeling of freedom among each and every citizen....otherwise it is impossible to stop these type of incidents...