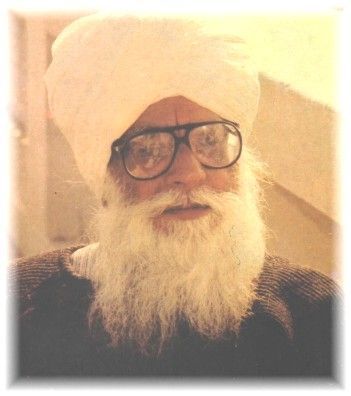 Here's a description of his life from sikh-history.com

Sirdar Kapur Singh was a civilian, parliamentarian and intellectual. He was master of many-sided learning Besides Sikh theology, he was vastly learned in philosophy,11istory and literature. He was born into a farming family, at the village Chakk in Ludhiana district on 2 March 1909. His father's name was Didar Singh. Sirdar Kapur Singh received his Master's degree, first class first, at the prestigious Government College, Lahore, after which he went to Cambridge to take his Tripos in Moral Sciences. He was a distinguished linguist and had mastered several of the languages of the east and the west Besides English with extraordinary subtlety and finesse, he had facility in Persian and Arabic as well as in Sanskrit.

In addition to these, he claimed easy acquaintance with such discrete fields as astrology, architecture and space science In spite of his knowledge covering many disparate areas, Sirdar Kapur Singh's principal focus was Sikh literature and theology. He was a stickler for accuracy of fact and presentation. He stood up four square to any misrepresentation or falsification of any shade of Sikh thought and belief. He was most vigilant and unbending in this respect.

He was selected into the Indian Civil

Service and served in various administrative posts in the cadre in 1947, he was appointed deputy commissioner of Kangra. He was particularly irked by the growing narrow politics of the government biased against the Sikhs. What incensed him most was a circular letter dated 10 October 1947, issued by the state governor, Chandu Lal Trivedi, warning district authorities in the Punjab against what was described as the criminal tendencies of the Sikh people. Kapur Singh filed a strong protest against this utterly wild accusation. He therefore invited the governor's wrath, Charges Were brought against him which led to his dismissal from the service.

Sirdar Kapur Singh became an ardent supporter of the Akali demand for a Punjai speaking state. After a brief stint as Professor of Sikhism under the authority of the Akal Takht, he joined active politics in 1962, he was to the lower house of Indian Parliament and a member of the Punjab Vidhan Sabha (State legislative Assembly) in 1969. He was forthright in speech and an unrelenthlg critic of govcrnment's policies where they crossed the path of the Sikhs. As a Sikh ideologue he was the moving spirit behind the Anandpur Sahib resolution adopted by the Shiromani Akali Dal in 197S, which like several other of his pronouncements became a crucial enunciation of modern Sikh political formulla and policy. A very stirring Sikh document of the modern period was the Presidential address given at Hari Singh Nalva conference convened at Ludhiana on 14 July, it Although it was nowhere specified, all important Sikh political or intrinsically scholarly documents of this period bear the imprint of Kapur Singh's penmanship in sonorous phrase, the conference resolution said." This Conference in commemoration of General Hari Singh Nalwa of historical fame reminds all concerned that the Sikh people are makers of history and are conscious of their political destiny in a free India. This Conference recalls that the Sikh people agreed to merge in a common Indian nationality on th

e explicit understanding of being accorded a constilutional status of co-sharers in the community, which solemn understanding now stands cynically repudiated by the present rulers of India Further, the Sikh people have been systematically reduced to a sub-political status in their homeland, the Punjab, and to an insignificant position in their motherland, India. The Sikhs are in a position to establish before an impartial international tribunal, uninfluenced by the present Indian rulers, that the law, the judicial process, and the executive action of the State of India is consistently and heavily weighted against the Sikhs and is administered with unbandaged eyes against Sikh citizens. This Conference, therefore, resolves, after careful thought, that there is left no alternative for the Sikhs in the interest of self-preservation but to frame their political demand for securing a self-determined political status within the Republic of Union of India. " The author's name is not mentioned here, but it is clearly the handiwork of Sirdar Kapur Singh The Shiromani Gurdwara Parbandhak Committee's publication at the time of the Nirankari attack on the Sikhs is described thus

Sirdar Kapur Singh, besides being an extraordinarily learned man, was a prolific writer in addition to his Parasarprasna, in English, which ranks as a classic on Sikh philosophy, his other works includeHashish (Punjabi poems), Saptassrang (Punjabi biographies), Bahu Vistar (Punjabi essays), Pundrik (Punjabi essays on culture and religion), Mansur-al-Hallaj (monograph on a Sufi saint), Sachi Sakhi (memoirs), Sacred Writings of the Sikhs (a UNESCO publication), Me Judice (English miscellany), Sikhism for Modern Man , Contributions of Guru Nanak, The hour of Sword,Guru Arjun and His Sukhmani.

Sirdar Kapur Singh died after a protracted illness at his village home in Jagraon in ludhiana district on 13 Augllst 1986.
​

Pakistani Punjabi scholar Sayyad Sibtul Hassan Zaigham has transliterated in Shahmukhi (Persian script) a controversial book written by Sirdar Kapur Singh (1909-1986), who had been dismissed as ICS officer and was architect of the Anandpur Sahib resolution. The Shamukhi version of “Sachi Sakhi” would be shortly published in Lahore to mark Kapur’s birth centenary.
This was disclosed by Canada-based columnist Jai Teg Singh Anant, who has compiled articles on the life of the former ICS officer.
The “Sachi Sakhi”, published by the Shiromani Gurdwara Parbandhak Committee, has been in the web of controversies when senior SGPC member Kiranjot Kaur sought review of the controversial book since it contained derogatory remarks against her grand father Master Tara Singh in 2000.
Meanwhile, the centenary birth celebrations of Kapur in India has started with the organising of a seminar by the Dal Khalsa here. The seminar was presided over by Baba Harnam Singh, chief of the Damdami Taksal. The resolution passed on the occasion asks the state government to set up chair in the name of Kapur either at Guru Nanak Dev University or Punjabi University.
A message of Dal Khalsa’s Pakistan-based leader Gajinder Singh was also read out.
The centenary birth anniversary celebrations of Kapur may embarrass the ruling Shiromani Akali Dal amid the Lok Sabha elections since it (SAD) has virtually abandoned the controversial Anandpur Sahib resolution.
Besides Sikh theology, Kapur was vastly learned in philosophy, history and literature. He was selected to the Indian Civil Services . In 1947, he was appointed DC of Kangra. Later, he was dismissed as ICS officer.
After a brief stint as Professor of Sikhism under the authority of Akal Takht, Kapur joined active politics. In 1962, he was elected to the Lower House of Parliament and a member of the Punjab Vidhan Sabha in 1969.
You must log in or register to reply here.
Similar threads
Shekhar Kapur tweet on 1984 riots
Nawab kapur singh
Was Maharaja Ranjit Singh a Bhatti Rajput?
Sukha Singh and Mehtab Singh
Ravish Kumar - Salute to SI GaganDeep Singh, Mayawati-Bunglow, Prime Time Part 2 , 25 May
Share:
Facebook Twitter Pinterest WhatsApp Link
Top