Shivpal might have been right about not making Akhilesh CM, hints Mulayam 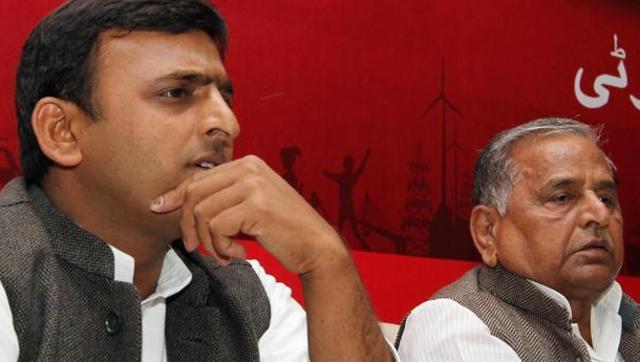 Samajwadi Party national president Mulayam Singh Yadav on Saturday indicated that he probably made a mistake by ignoring his brother Shivpal’s advice of not letting Akhilesh Yadav become the chief minister four years ago.
Addressing “unruly and indisciplined” youth wing workers and leaders who have been protesting against the family’s internal squabbles since Thursday night, Mulayam said Akhilesh – now the Uttar Pradesh chief minister – was offended by his uncle’s suggestion. “In 2012, Shivpal opined that I should become the chief minister for the fourth time, and Akhilesh must be crowned only after the 2014 Lok Sabha elections. Akhilesh has been miffed with Shivpal ever since.”

The Samajwadi Party chief claimed that Shivpal was probably right in making the suggestion. “The defeat in the Lok Sabha polls was proof of this. Who was the chief minister when we lost in 2014 – getting just five seats? Can you even imagine how humiliated I felt? At one time, when I was the chief minister, we got 27 seats. At another instance, our Lok Sabha tally was 39. But how many seats did we get in 2014? Five seats – just five! We were ruined,” he said.
However, when one of the party activists pointed out that the “Modi wave” was at work in 2014, the Samajwadi Party supremo curtly told him to sit down.

Mulayam said Akhilesh let his ego get the better of him during his tenure as the Uttar Pradesh chief minister. “Fine, he is my son! But had I not agreed, he would have not become the CM ever. Everybody must know that once you are in a high post, you should learn to take everyone along. You must also learn to tolerate criticism. What did Akhilesh do before the 2012 polls, other than riding a bicycle? While I admit that his government may have done a good job, most of it consisted of just carrying forward the work my government did,” he added.
In his address, Mulayam praised party leader Amar Singh and former state ministers Gayatri Prasad Prajapati and Balram Yadav – calling them useful for the family. “Shivpal put his very life at stake for us on several occasions. What was the need to change his portfolios? Why did Akhilesh throw him out? If the two had any issues, they could have sorted them out between themselves,” he said.

The Samajwadi Party chief recalled how hard he and Shivpal had worked to bring it up. “We slept in huts, went to jail, faced lathi-charges. Were you all there back then? I won’t let this ‘tamash’ go on!” he said.
Mulayam also expressed his displeasure over the party’s youth wing workers protesting against the internal conflicts in the political organisation. “It’s a family issue, just stay out of it,” he told them.
You must log in or register to reply here.
Share:
Facebook Twitter Pinterest WhatsApp Share Link
Top