Shera, the official mascot of the XIX Commonwealth Games, after having remained elusive for the first two days of his stay here, finally came out in the public today.

The Promotion and Communication Committee formed specifically for the Delhi Commonwealth Games also came out with the schedule of its stay in the city till the Queen’s Baton enters the country across the Attari-Wagah joint checkpost on June 25.

Shera went to the Government College for Women in the afternoon, encouraged budding hockey players at Guru Nanak Stadium in the evening and later interacted with the public at Bhai Veer Singh Marg (popularly known as the Lawrence road), Rambagh and a shopping mall.

Shera was accompanied by a dholi, officials of the committee and an official of the district administration.

Earlier, Shera remained elusive since its arrival on June 19. Neither officials of the Commonwealth Games Organising Committee nor officials of the district administration made efforts to inform residents of the city about its arrival, stay and participation in the run for the Games.

Even run for the Games, which was held yesterday morning in the historic Rambagh, was not publicised among the public. Though some sportspersons of the city participated in it, many of them were not informed. Hockey Olympian and Arjuna awardee Col Harcharam Singh was also not intimated about the event. It was the only event yesterday in which Shera was present for a brief duration.

Shera will visit the Golden Temple, Jallianwala Bagh and Durgiana Temple on June 22 and Cantonment, Guru Nanak Dev University and BSF headquarters on the next day.

To accord a warm welcome to the Baton, artistes selected by the Centre and the North Zone Cultural Centre, Punjab, will perform showcasing different shades of the Indian culture near the zero line. 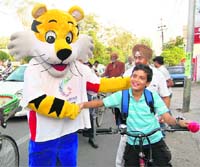 For lanky Satish Bidla, who is breathing life into Shera, this job is not an easy one. Though he has to wear a 10-kg mascot suit to promote the Games in the sweltering heat, he is enjoying his new job, which has certainly brought him extra money, media glare and a chance to visit various parts of the country. Director of the Promotion and Communication Committee of the Games Gaurav Thakur said they were planning to have one more Shera. “One will remain in Delhi and the other will be used for promotional activities in the rest of the country,” he added.
You must log in or register to reply here.
Share:
Facebook Twitter Pinterest WhatsApp Share Link
Top