Shahpur govt college to be named after martyr 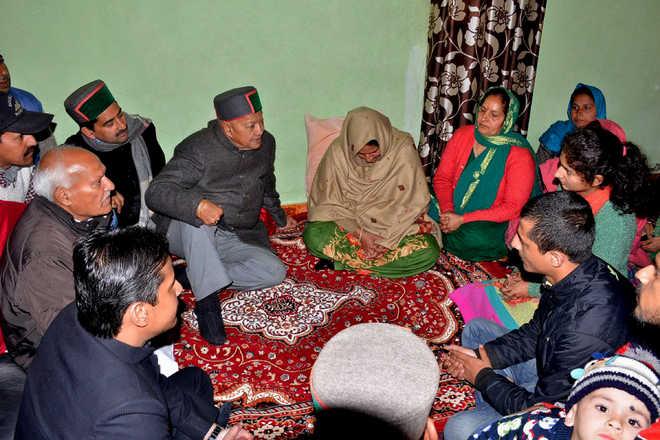 Government College Shahpur will be named after Sanjeevan Rana, a soldier from Shahpur area of Kangra district who attained martyrdom while fighting terrorists at Pathankot airbase last month. Chief Minister Virbhadra Singh today made this announcement after visiting the family of Sanjeevan Rana in Sehwan village of Shahpur area. A request regarding naming the college after the martyr came from vice chairman of the forest corporation, Kewal Singh Pathania.
The Chief Minister said that the NDA had also failed on the national security front. Therefore, terrorist attacks were witnessed in Pathankot and Dinanagar.
The CM also alleged that the NDA government had failed to control rising prices of petrol and pulses. International price of petrol and diesel was $35 per barrel which amounted to Rs 12 per litre. But the NDA government had failed to provide relief to the common man.
While addressing a public rally at Kotla in Jawali Assembly constituency, the CM said that Rs 10 lakh each would be distributed to 114 gram panchayats who elected their representatives unopposed.
He said barring Kangra, Kinnaur and Hamirpur where the posts of Zila Parishad chairperson had gone to the BJP-supported candidates, all other top posts of Zila Parishad in nine remaining districts had been bagged by the candidates of the Congress.
Virbhadra Singh said the BJP leaders should come openly if they wanted to fight a political battle but should refrain from backstabbing. Shanta Kumar too remained the Chief Minister, but his way of working was quite different and decent. He never implicated his political opponents in false cases.
“No matter what modus operandi the state BJP leaders may adopt against me, the people of the state are with me and have stood with me like a shield”, said Virbhadra Singh.
The Chief Minister said 8,842 hand pumps had been installed in Kangra district in the last three years whereas 62 irrigation schemes were under progress, including Rs 205-crore Phinna Singh irrigation scheme at Nurpur and Rs 180 crore Chonch Khud channelisation in Indora.
Virbhadra Singh announced upgrade of Primary Health Centre, Kotla to Community Health Centre, opening of an ayurveda dispensary at Bagga and foot bridge over Bhed khud and Kotla – Balla over Dehar khud. He announced fencing of sports ground at Kotla and a pedestrian path leading to Mata Bagula-Mukhi temple from Kotla bridge.
He assured that the matter for Kotla-Shimla bus would be discussed on priority basis. He also laid foundation stone of Sub-Tehsil building at Kotla to be constructed at cost of Rs. 81 lakh.
Chief Parliamentary Secretary Neeraj Bharti said Kotla belt was neglected by the BJP government in terms of development but during the last three years this constituency had witnessed speedy development in all spheres.
Chairman OBC Welfare Board Chander Kumar said the Congress was committed to develop Jawali Assembly segment as a model constituency.
Minister for Agriculture Minister Sujan Singh Pathania, Vice-Chairman Forest Corporation Kewal Singh Pathania and Ex-MLA were among others president on the occasion.
You must log in or register to reply here.
Similar threads
US charges 5 Chinese hackers, Indian Govt network affected too
Punjab News College Girls ਤੋਂ ਸੁਣੋ ਕਿਹੋ ਜਿਹੀ ਹੋਵੇ New Govt.
Punjab News ਨਸ਼ਾ ਤੇ Cash ਲੈ ਕੇ ਆਖਿਰ ਕਿੱਥੇ ਜਾ ਰਹੀਆਂ ਸਨ Jammu ਦੀਆਂ Govt. Buses
Bangladesh Removes Quota In Govt Jobs After Massive Student Protest; All You Need To Know
Alerted on scam, govt did nothing: CongNEW DELHI:
Share:
Facebook Twitter Pinterest WhatsApp Link
Top