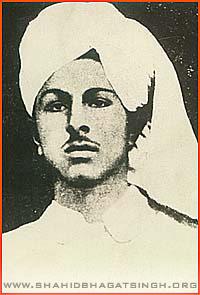 Shaheed-e-Azam Bhagat Singh was a revolutionary and martyr, born on 27 September 1907 at the village of Banga, Lyallpur district (now in Pakistan) the second son of Kishan Singh and Vidya Vati. Bhagat Singh was imbued from childhood with the family's spirit of patriotism. At the time of his birth, his father was in jail for his connection with the Canal Colonization Bill agitation, in which his brother, Ajit Singh (Bhagat Singh's uncle), took a leading part. Through his father, who was a sympathizer and supporter of the Ghadr campaign of 1914-15, Bhagat Singh became an admirer of the leaders of the movement. The execution of Kartar Singh Sarabha made a deep impression on the mind of the young man who vowed to dedicate his life to the country.

Having passed the fifth class from his village school, Bhagat Singh joined Dayanand Anglo-Vedic School in Lahore. In response to the call of Mahatma Gandhl and other nationalist leaders, to boycott government aided institutions, he left his school and enrolled in the National College at Lahore. He was successful in passing a special examination preparatory to entering college. He was reading for his B.A. examination when his parents planned to have him married. He vehemently rejected the suggestion and said that, if his marriage was to take place in Slave-India, my bride shall be only death." Rather than allow his father to proceed any further with the proposal, Bhagat Singh left home and went to Kanpur where he took up a job in the Pratap Press. In his spare time, he studied revolutionary literature. He joined the Hindustan Republican Association, a radical group, later known as the Hindustan Socialist Republican Association. When Bhagat Singh was assured that he would not be compelled to marry and violate his vows sworn to his motherland, he returned to his home in Lahore. This was in 1925 when a morcha had been going on at Jaito to protest against the deposition by the British of Maharaja Ripudaman Singh of Nabha because of his sympathy with the Akali agitation. A warrant for the arrest of Bhagat Singh was issued because he had accorded a WeLcOmE to one of the jathas, but he managed to elude the police and spent five months under the assumed name of Balvant Singh in Delhi, where he worked in a daily paper Vir Arjun.

As Akali activity subsided, Bhagat Singh returned to Lahore. He established contact with the Kirti Kisan Party and started contributing regularly to its magazine, the Kirti. He also remained in touch with the Hindustan Socialist Republican Association. In March 1926 was formed the Naujawan Bharat Sabha. Bhagat Singh, one of the principal organizers became its secretary. As the Simon Commission arrived at Lahore on 30 October 1928, an all-parties procession, headed by Lala Lajpat Rai, marched towards the railway station to make a protest. Intercepting the procession, police made a laths charge and Lala Lajpat Rai received injuries. He died a fornight later. Although the British saw no connection between the lathi charge and Lala Lajpat Rai's death, Bhagat Singh and his associates did. They plotted the assassination of Mr Scott, the Superintendent of Police, believed to have been responsible for the laths blows given Lala Lajpat Rai, but instead J.P. Saunders, an Assistant Superintendent of Police, became the actual victim owing to mistake in identification. Bhagat Singh and Rajguru had done the actual shooting. They and those who had served as lookouts escaped through the D.A.V. College grounds. The next day a leaflet was circulated by the Hindustan Socialist Republican Association announcing that the death of Lala Lajpat Rai had been avenged. 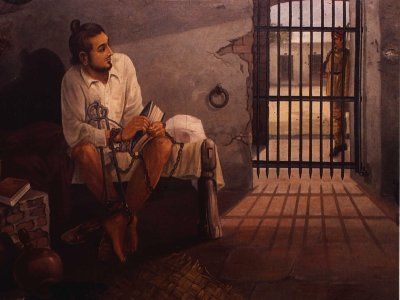 Bhagat Singh escaped to Calcutta disguised as a wealthy personage. He remained quiet for several months, but became active again when Public Safety Bill and the Trade Disputes Bill were being debated in Delhi. As his group resolved to explode a bomb to express disapproval of the bill, Bhagat Singh and B.K. Dutt volunteered to carry out the plan. They were seated in the gallery of the Central Assembly Hall awaiting the reading of the proclamation that would enact the bills. When the announcement was made, Bhagat Singh jumped up and threw a relatively harmless bomb behind one of the members' benches. There was an explosion, followed by still another from a second bomb. No one was seriously injured. Bhagat Singh and Dutt began shouting revolutionary slogans and threw leaflets explaining their in tent of making "the deaf hear" with the loud noise of explosion. Both were promptly taken into custody. As the trial proceeded, a statement, written in its entirety by Bhagat Singh, was read in defence of the two accused. Bhagat Singh said that "force used for a legitimate cause has its moral justification." He and B.K. Dutt were found guilty and sentenced to transportation for life. After the sentence had been pronounced in the Assembly Bomb case, Bhagat Singh was bound over for trial in the Saunders Murder case, approvers having identified his role in the killing. While awaiting trial in the Lahore Jail, Bhagat Singh started a hunger strike in behalf of political prisoners. The fast was continued even after the hearing of the case began on 10 July 1929, and was subsequently joined by many others. It was not until after the death of one of these, J.N. Das, on 13 September 1929, that facilities were promised to the prisoners and the hunger-strike abandoned.

At the time of trial, Bhagat Singh offered no defence, but utilized the occasion to propagate his ideal of freedom. He and his fellow accused kept delaying the proceedings by refusing to appear before the court, by ignoring what was going on, or by disrupting the work by shouting revolutionary slogans. He heard with defiant courage the death-sentence pronounced on 7 October 1930. In the same spirit, he kissed the hangman's noose on 23 March 1931, shouting for the last time his favourite cry, "Down with British imperialism." His body was secretly cremated at Husainivala by police and the remains thrown into the River Sutlej. The next day, however, his comrades collected the bodily remains from the cremation site and a procession was taken out in Lahore. Mourning for him was spontaneous and widespread and homage was paid to him for his sterling character and sacrifice.

In 1950, after Independence, the land where Bhagat Singh and his companions were cremated was procured from Pakistan and a memorial built. In March 1961, a Shahidi Mela was held there. Every year, on 23 March, the martyr's memory is similarly honoured. The old memorial, destroyed in the 1971 Indo-Pak war, has been rebuilt Bhagat Singh is remembered by the endearing title of Shahid-i-Azam, the greatest of martyrs.

Paying his tribute to him at a meeting of the Central Sikh League at Amritsar on 8 April 1931, Subhas Chandra Bose said, Bhagat Singh who set an example of character and patriotism by sacrificing himself for the sake of the country's freedom, was from the Sikh community. Today, he is known to be a brave Sikh hero throughout the world The Sikh community has to produce thousands of Bhagat Singhs for the cause of the country."​

Visit This webpage to have a look at their original Photo's and Read all the original Letters written in their Regime.