Sexual offences on the rise 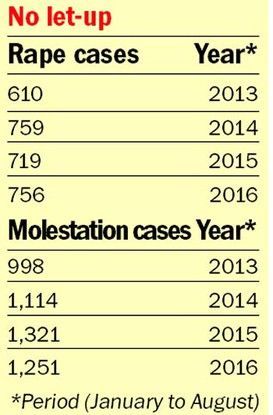 Infamous for gender bias, Haryana witnessed more cases of rapes and crimes against women than neighbouring Punjab, Himachal and Chandigarh in 2015.
Haryana contributes 2.4 per cent share in total sexual offences in the country against 1.7 percent by Punjab, 0.6 per cent by Himachal Pradesh and 0.1 per cent by Chandigarh.
According to the National Crime Record Bureau’s (NCRB) annual report ‘Crimes in India ¬— 2015’ released recently, the rate of sexual offences (incidents of sexual offences per 1,00,000 of female population) in Haryana for 2015 was 11.6 against 10.04 in Himachal, 7.5 in Punjab and 9.4 in Chandigarh.
A total of 1,070 incidents of rapes were reported in Haryana in 2015, as per the NCRB report. Data of the Police Department in Haryana also shows that the incidents of rape have witnessed an increase in the state in the past four years.
“The increase in the numbers is largely because of the fact that more women are coming forward to report crimes committed against them due to steps initiated by the state government,” said Rajbir Deswal, Additional Director General of Police (Human Rights and Litigation).
Deswal said steps like opening of women police stations, online registration of FIRs on the Haryana Police portal Harsamay, complaints received on CM Window, etc., have encouraged women to come forward and lodge their complaints freely with the police.
He said the state police had ensured that prompt action was taken in all FIRs registered by women. He said the government was going to introduce ‘mahila volunteers’ in all villages to check crimes against women.
You must log in or register to reply here.
Share:
Facebook Twitter Pinterest WhatsApp Share Link
Top