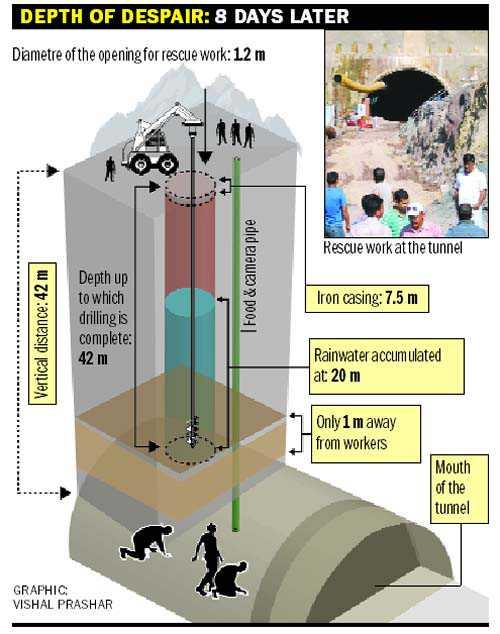 Satish Tomar and Mani Ram, the two trapped workers who could have been rescued on Saturday night, slipped back into darkness of the caved-in tunnel today after the “food supply hole” got blocked due to water seepage.
Though the de-watering of the food supply hole was on, the rescue team could not do much over the past 18 hours due to a snag in the drilling machine.
As experts have yet to take a final call on whether or not to enter the tunnel without casing, the rescue operation may get delayed further.
The contractor firm (IL &FS Company) and the National Highways Authority of India (NHAI) have failed to fix the burst pipe of the drilling machine that got stuck in the 1.2-m hole when only one metre of drilling was left to reach the trapped workers last night.
Two drilling machines hired from Ghumarwin got stuck in slush on the link road specially constructed to ferry machinery to the drilling site.
“The machine has been taken out from the 1.2-m hole and efforts are on to de-water the food supply hole,” said RS Rao, superintending engineer of the Rohtang tunnel project (Border Roads Organisation). Experts from the Satluj Jal Vidyut Nigam (SJVNL) and the National Disaster Response Force (NDRF) are also assisting the administration in the rescue work.
The casing of the 1.2-m hole turned out to be a failure last evening. Had the machine not developed a snag, the workers would have been rescued last night itself, experts said.
Members of the families of Satish and Mani Ram talked to them today as the communication link with them was still intact. However, no food could be supplied to them due to watering of the supply hole.
NDRF Deputy Commandant Anil Kumar Dabral said the team was ready with equipment to pull the workers out of the tunnel once the drilling was over. “We have cutters that can cut the concrete and iron cast on the ceiling of the tunnel to facilitate workers’ rescue,” he added.
Bilasur Deputy Commissioner Manasi S Sahay and SP Balbir Thakur are camping at the site to oversee the entire effort.
You must log in or register to reply here.
Similar threads
Traffic jam in heart of Delhi clogs arterial roads, adds to smog misery
Mehbooba in no hurry, adds ‘peace’ to puzzle
BitComet Adds Support for “Anonymous” Downloads
Facebook adds security tools, holds privacy meeting
Himachal News
Share:
Facebook Twitter Pinterest WhatsApp Link
Top