In a gruesome incident, a Saudi family has allegedly hammered 23 nails into a Sri Lankan maid's body after she complained of workload, a media report said, quoting a senior diplomat in the Lankan Embassy in Riyadh.


A Saudi couple tortured their Sri Lankan maid by hammering 24 hot nails into her after she complained of her heavy workload.

X-rays showed the brutal result after the nails were hammered into the hands, legs and feet of LT Ariyawathi, a 49-year-old mother-of-three.

Mrs Ariyawathi had returned to Sri Lanka on Friday after five months in Saudi Arabia.

Her family took her to the hospital after it became clear she was in massive amounts of pain.

It was then that doctors discovered the 1in to 2in nails inside her body. One had been hammered in over her eyes, officials said.

Mrs Ariyawathi told a local newspaper that her employers tortured her with the nails as punishment.

'They (employer and his family) did not allow me even to rest. The woman at the house had heated the nails and then the man inserted them into my body,' she was quoted as saying in the Lakbima, a newspaper published in local Sinhalese language.

She told the paper that she went to Saudi Arabia in March and was paid only two months' salary, with her employer withholding three months' salary to buy an air ticket to send her home.

Dr HKK Satharasinghe said X-rays show Mrs Ariyawathi has 24 nails and needles in her body. Some of her wounds have healed over, he said but she finds it difficult to walk because she has two nails in her knee and two in her ankles. 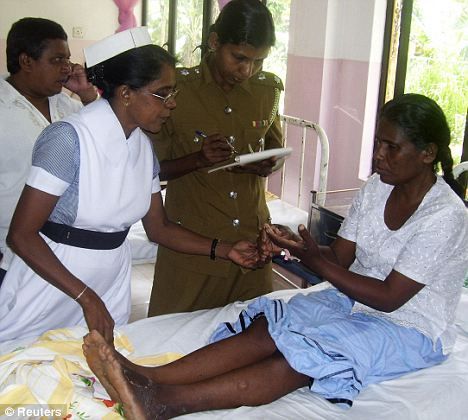 Another needle is in her forehead, and the rest are in hands, he said.

'Her condition is stable, but we are giving antibiotics and painkillers,' Dr Satharasinghe said, adding that doctors will begin removing the remaining nails tomorrow.

Kalyana Priya Ramanayake, media secretary of the Sri Lankan Foreign Employment Bureau, said: 'The landlord and the wife of the landlord hammered 24 nails into her when she complained of the heavy workload.'

He added that Mrs Ariyawathi had been too afraid to complain about the abuse to Saudi authorities, fearing that her employers might not let her return home. She also did not report the abuse to Sri Lankan officials, until she was hospitalised.

A diplomatic row is brewing between the two countries over the incident.

The Sri Lankan External Affairs Ministry is to confront the Saudi government over the attack, while the Sri Lankan Foreign Employment Bureau is consulting with the Attorney General over any possible legal action.

Around 1.4 million, mostly maids, were employed in the Middle East with 400,000 working in Saudi Arabia alone. Many have complained of physical abuse or harassment.

The reason this is allowed to flourish largely unchecked is because it is tied to a system of migrant sponsorship called kafala, which ties migrant workers' residency permits to their employers.

It leads to abuses such as employers confiscating passports, withholding wages and forcing migrants to work against their will.

Recent law reforms have set prison sentences of up to 15 years for forced labour to combat trafficking, and extended some protection to migrant domestic workers.

However, the reforms excluded giving domestic workers the rights to leave the house or keep their passports and it still requires them to obey the employers.

Saudi's foreign embassies report thousands of complaints each year from domestic workers forced to work 15-20 hours a day for seven days a week, who are denied their salaries, denied food and drink and sometimes even subjected to sexual abuse.

Recourse to justice is poor too with obstacles such as lack of access to interpreters, legal aid, or their consulates which means few migrants successfully pursue criminal cases against abusive employers.

Successful legal action by migrant workers is rare and often migrants are deported before they can pursue their case.

In 2008 authorities repatriated Keni binti Carda, an Indonesian domestic worker, before she could formally complain about her employers causing her severe burns and prying out her teeth.

these habeebs /saudis will never learn..i think to much hot climate make them to do weird things like,,,


RIYADH: Saudi Arabia executed two murderers including a Yemeni whose body was nailed to a cross after he was convicted of killing a fellow countryman and his daughter, the interior ministry said today.

Shaaban al-Nasheri was beheaded for shooting dead Dhayeh al-Manbahi after barging into his family home in the southwestern town of Jazan, the ministry said in a statement cited by the official SPA agency.

Nasheri was also found guilty of raping and killing Manbahi's daughter before shooting and wounding her sister.
Following his execution, the murderer's body was nailed to a cross in Jazan.

In the second case, Saudi national Mohammed al-Zahrani was decapitated in El-Baha, in the southwest, for shooting dead compatriot Said al-Zahrani over a land dispute.
The beheadings bring to 15 the number of executions reported in the ultra-conservative Gulf monarchy this year, according to an AFP count. In 2009, there were 67 reported executions in the kingdom, compared with 102 in 2008.
www.news.com.au/breaking-news/saudi-beheads-and-nails-murderers-body-to-cross/story-e6frfku0-1225882510806

RIYADH, Saudi Arabia — A 19-year-old female victim of gang rape who initially was ordered to undergo 90 lashes for "being in the car of an unrelated male at the time of the rape," has been sentenced to 200 lashes and six months in jail for telling her story to the news media.

For those who do not believe what the Saudis are capable of: there is a verified story of a filipino who worked as a maid in Saudi Arabia.
She was raped by the arab “man” of the house and by its son. She did not report the crime for fear of her life. She became pregnant, and the truth came out. She was convicted by a Saudi court of “witchcraft” – causing the “helpless” arab males to rape her against their will!!! She was taken to an execution ground, given 100 lashes and then beheaded by the fat p*g the sowdees use as an executioner. Her photos prior to and after her execution (murder) were available on the internet (posted by some Womens rights activists) but were removed by Google presumably as a consequence of Obamas election campaign (I apologise to Obama if this suspicion is incorrect – if not he will answer for it at some time in his political future). Evidence suggest that many arabs behave in a sub-human fashion – and arabs were fortunate that none were nearby on the day I first saw the photos of the murdered woman – the look of horror and pain, frozen on her face after her decapitation, can never be forgiven or forgotten.