Sania, Hingis on a roll 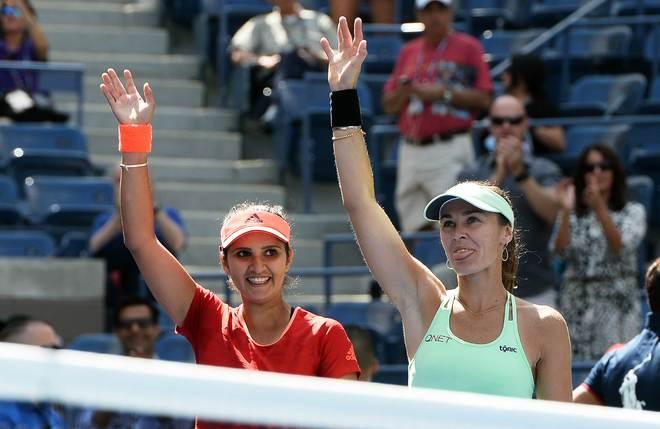 Top seeds Martina Hingis and Sania Mirza beat Casey Dellacqua and Yaroslava Shvedova 6-3 6-3 to win the US Open doubles title on Sunday and cap off a perfect visit to Flushing Meadows.
Switzerland’s Hingis, the former singles world No. 1 and Mirza, tore through the doubles tournament without dropping a set to claim back-to-back Grand Slams after their victory at the Wimbledon.
It has been a productive and busy visit to New York for Hingis who also captured the US Open mixed doubles title with India’s Leander Paes.
Having only joined forces in March, Mirza and Hingis have enjoyed a successful partnership reaching six finals in 12 events and winning two Majors.
“We started playing in March, obviously in America, and we won three out of three. That rarely happens,” said Mirza. “We hit it off and obviously we have become more friends now. I think we trust each other on and off the court. I think that helps us through a lot of tough moments on the court. Obviously our games match, kind of complement each other, you know, with her at the net and from me at the back. I think that’s the best combination.”
After easily taking the first set Hingis and Mirza broke to open the second and apart from a late wobble were never really threatened by the Australian Dellacqua and Kazakhstan’s Shvedova.
For Hingis it was her second US Open doubles title coming 17-years after she won her first in 1998 with Jana Novotna. “I won the doubles in ‘98, and that was like finishing off the Grand Slam,” recalled Hingis. “I won all four in that same year. It was just like incredible.
“We all felt like there was a little bit of nervousness, definitely, especially today because... it’s been a while. I know I have the support and the trust that I have for her (Mirza) shots and for her game. It’s even building up every time we step out together.”
You must log in or register to reply here.
Share:
Facebook Twitter Pinterest WhatsApp Link
Top