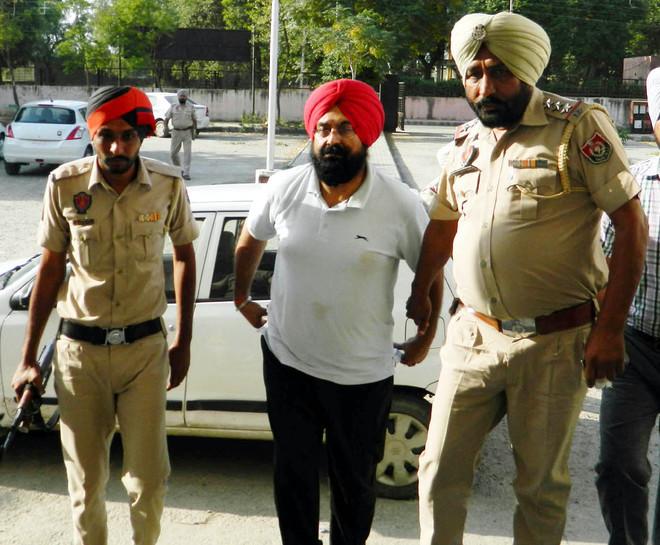 The Bathinda police have started probing the records of Rs1.1 crore property bought recently by suspended Agriculture Director Mangal Singh Sandhu arrested in the infamous pesticide scam.
A team comprising IG Balvir Kumar Bawa, DIG Mohnish Chawla and SSP Inder Mohan Singh Bhatti is investigating the case. Sources in the Police Department said Sandhu had bought Rs 1.1 crore worth of property comprising a flat in the name of his daughter at Yamuna Apartments in Kharar and a showroom in the name of one of his relatives.
“The registry of this flat may be more than what has been projected in the papers. We are probing that too,” said sources.
The SSP added that the arrested director had also not filed property tax return for this year, which was mandatory for every government employee to file.
Police officials said in the forthcoming days names of more senior officers of the state Agriculture Department were likely to crop up with subsequent action.
The Bathinda police had arrested Mangal Singh Sandhu from his residence in Chandigarh on Sunday in the fake pesticide scam. Sandhu is accused of having placed an order to buy 92,000 litre Oberon — a pesticide not recommended by Punjab Agricultural University (PAU) — without floating tenders or getting into competitive bidding.
At least six properties and certain bank accounts’ transactions of Sandhu are also under the scanner.
According to a Punjab police officer, involved in the investigations of the Sandhu case, documents of at least six properties, mostly in name of Sandhu and his wife Jasbir Kaur Sandhu, have been confiscated from Sandhu’s residence at Chandigarh.
The officer added that documents of three residential plots and three agriculture land plots have been confiscated from his residence.
“Sandhu has two residential plots (10 marla each) in his name at Kharar, while the third plot is at some Sherwood Estate. Apart from the documents of 8 kanal agriculture land in name of his wife at Pakki Tibbi village in Malout, 18 kanal plot’s registry in the name of some Chanpreet Singh at Pandori Gallan village at Taran Tarn and another two kanal plot at Malout were found from his house,” said the officer.
Besides, the police are also investigating the Axis Bank account of Jasbir Kaur Sandhu, which showed a total of Rs 4.59 crore transactions in the past one year since October 1, 2014, till date.
The one-year details of the account, whose current balance is said to be Rs 1.03 lakh, showed regular online transactions of Rs 70,000 on every second or third day. “The trend of depositing and withdrawing the amount (Rs 70,000) certainly raises suspicion,” said the officer. Similarly, the police have been minutely scrutinising Mangal Singh’s bank account details in Oriental Bank of Commerce at Sector-34 branch in Chandigarh, which showed certain “heavy” transactions, involving lakhs of rupees, in May, June and August this year.
kin blame Tota Singh, CMO official
Lambi: The brothers of suspended Agriculture Director Mangal Singh Sandhu on Tuesday said the police were repeatedly conducting raids at their residence in Pakki Tibbi village. Jasbir Singh and Rakbir Singh alleged the police were repeatedly visiting their village as if they were on the trail of militants. “A police party led by SHO Kabarwala police station searched our house thrice on Monday, but could not find anything illegal,” they said. “Besides Agriculture Minister Tota Singh, a senior IAS officer in the CM’s Office is involved in the scam, but they have put the entire blame on our brother,” they alleged. Kuldeep Chahal, SSP, Muktsar, claimed they had not conducted any raid at Sandhu’s residence. — Archit Watts
Another FIR registered
Chandigarh: On the basis of the preliminary inquiry report submitted by the Special Secretary, Agriculture, on Sandhu’s alleged role in purchasing Oberon pesticide, a case has been registered at State Crime Police Station, in SAS Nagar. An official release said the case had been registered with regard to the purchase of spiromesifen pesticide (Oberon brand) by the Agriculture Department for the control of the whitefly attack on cotton crop. — TNS
Fake pesticides seized
Fazilka: Fake bio-fertilisers, insecticides and pesticides were seized from southern branch canal of Singhpura village in the district on Tuesday. It is suspected that some pesticide dealer may have dumped the substandard material to evade police action. Chief Agriculture Officer HS Bhullar said 80 kg of insecticides, 146 bags (each weighing 24 kg) and 103 bags (each bag weighing 4 kg) of bio-fertiliser and 231 kg of plant growth promoter had been seized.
You must log in or register to reply here.
Similar threads
Punjab News Gurtej Singh Sandhu ਨੇ ਆਪਣੇ ਨਾਂ ਕੀਤੇ ਸਭ ਤੋਂ ਜ਼ਿਆਦਾ Patent
A timeline of recent attacks blamed on Islamists in Bangladesh
The Recent Ratan Tata – JNU Issue Shows How We Failed As Social Media Users, Once Again
Recent Hacks Proved Need for Strict Copyright Law
Share:
Facebook Twitter Pinterest WhatsApp Link
Top