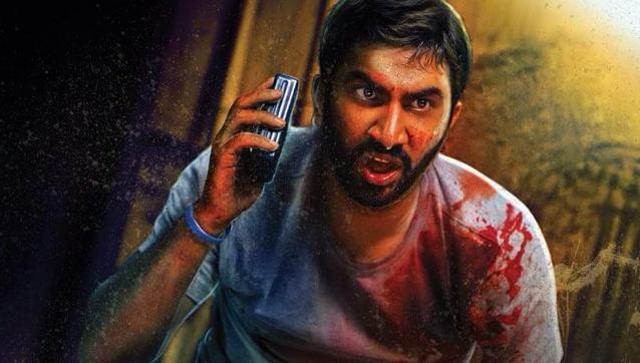 A few aspects about Sumanth Radhakrishnan’s directorial debut, Sadhuram 2, strike you as the film begins to roll. A crowd-funded movie and inspired by a 2004 American work, Saw (which has since then spawned a franchise with several editions), also by a first-time helmer, Leigh Whannell, Sadhuram 2 is being touted as a ‘philanthropical’ thriller. Not a psychological thriller as the American film was called. If one were to go by Radhakrishnan’s contention, his movie has been given that tag, because there is no revenge involved. I do not, for one, quite see this point of view.
Be that as it may, Sadhuram 2 (the first part is in the making!) is very similar to Saw that I have seen. And Radhakrishan’s narrative begins on a dark night in the air-traffic controller’s room at Chennai airport -- where one of the men find a plane on its flight from the city to New Delhi dropping off the radar. The plane crashes leaving just a single survivor.

Sadhuram 2 then cuts to a dark, windowless room where two men, Dr Vasudevan (Yog Japee) and photographer Vishal (Riaz), find themselves prisoners. They have been chained to the two opposite ends of the room with the corpse of a man lying between them. The two men do not have the faintest clue why they are there. But they are subsequently told via a taped message that they have some hours to escape -- or they will die. Outside the walls of the room -- which is more like a fortress -- Vasudevan’s wife and young daughter are also being held captive in a drama where there are two more key players. We have Dr Shankar (Brihadish), an assistant to Vasudevan and Shiva (Roheit Nair), whom we first see with his pregnant wife -- carrying twins. Anything more about the plot will be a spoiler.

Though Sadhuram 2 is a welcome 94 minutes long without the usual songs and dances or even unnecessary background score, the movie may not have a good theatrical run. An amateurish screenplay makes the film seem quite like a puzzle whose answers are not easy to find. It is never a cakewalk to make a suspense drama. It needs a lot of expertise -- like Hitchcock’s or Michael Haneke’s -- to present a work that is neat. Radhakrishnan slips here. So perhaps editor Raja Sethupathi.
You must log in or register to reply here.
Share:
Facebook Twitter Pinterest WhatsApp Share Link
Top