Staff member
Saddam Hussein was convicted and sentenced Sunday to hang for crimes against humanity in the 1982 killings of 148 people in a single town, as the ousted leader, trembling and defiant, shouted "God is great!"
As he, his half brother and another senior official in his regime were convicted and sentenced to death, Saddam yelled out, "Long live the people and death to their enemies. Long live the glorious nation, and death to its enemies!"
Some feared the verdicts could intensify Iraq's sectarian violence after a trial that stretched over nine months in 39 sessions and ended nearly 3 1/2 months ago. Clashes immediately broke out Sunday in north Baghdad's heavily Sunni Azamiyah district, but celebratory gunfire rang out elsewhere in the capital.
"This government will be responsible for the consequences, with the deaths of hundreds, thousands or even hundreds of thousands, whose blood will be shed," Salih al-Mutlaq, a Sunni political leader, told the al-Arabiya satellite television station.
Saddam and his seven co-defendants were on trial for a wave of revenge killings carried out in the city of Dujail following a 1982 assassination attempt on the former dictator. Prime Minister Nouri al-Maliki's Islamic Dawa party, then an underground opposition, has claimed responsibility for organizing the attempt on Saddam's life.
In the capital's Sadr City slum, people rejoiced in the streets, saying "Where are you Saddam? We want to fight you."
During Sunday's hearing, Saddam initially refused the chief judge's order to rise; two bailiffs lifted the ousted ruler to his feet and he remained standing through the sentencing, sometimes wagging his finger at the judge.
Before the session began, one of Saddam's lawyers, former U.S. Attorney General Ramsey Clark, was ejected from the courtroom after handing the judge a memorandum in which he called the trial a travesty.
Chief Judge Raouf Abdul-Rahman pointed to Clark and said in English, "Get out."
In addition to the former Iraqi dictator and Barzan Ibrahim, his former intelligence chief and half brother, the Iraqi High Tribunal convicted and sentenced Awad Hamed al-Bandar, the head of Iraq's former Revolutionary Court, to death by hanging. Iraq's former Vice President Taha Yassin Ramadan was convicted of premeditated murder and sentenced to life in prison.
Three defendants were sentenced to 15 years in prison for torture and premeditated murder. Abdullah Kazim Ruwayyid and his son Mizhar Abdullah Ruwayyid were party officials Dujail, along with Ali Dayih Ali. They were believed responsible for the Dujail arrests.
Mohammed Azawi Ali, a former Dujail Baath Party official, was acquitted for lack of evidence and immediately freed.
He faces additional charges in a separate case over an alleged massacre of Kurdish civilians.
The guilty verdict for Saddam is expected to enrage hard-liners among Saddam's fellow Sunnis, who made up the bulk of the former ruling class. The country's majority Shiites, who were persecuted under the former leader but now largely control the government, will likely view the outcome as a cause of celebration.
In Tikrit, Saddam's hometown, 1,000 people defied the curfew and carried pictures of the city's favorite son through the streets. Some declared the court a product of the U.S. "occupation forces" and condemned the verdict.
"By our souls, by our blood we sacrifice for you Saddam" and "Saddam your name shakes America."
U.S. Ambassador Zalmay Khalilzad issued a statement saying the verdicts "demonstrate the commitment of the Iraqi people to hold them (Saddam and his co-defendants) accountable."
"Although the Iraqis may face difficult days in the coming weeks, closing the book on Saddam and his regime is an opportunity to unite and build a better future," Khalilzad said. 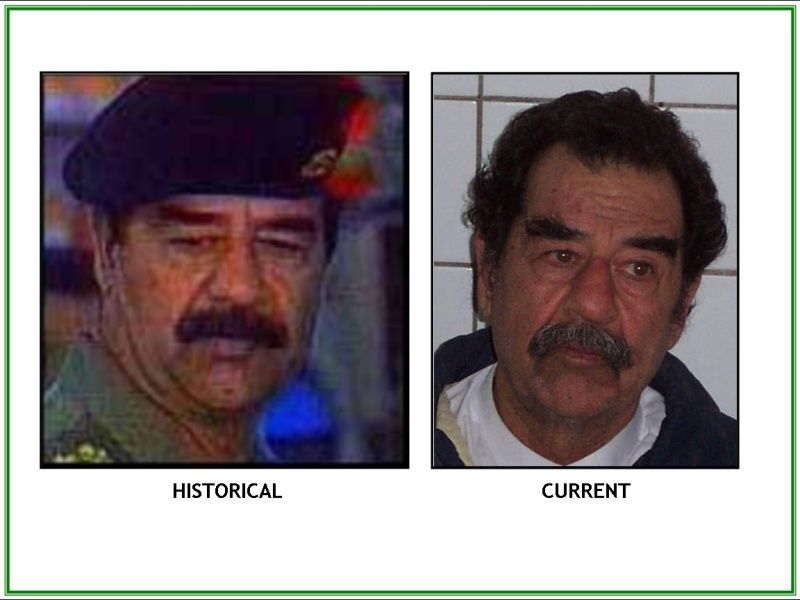 Nothing new US did......same thing they did to left out Germans (Hitler's associates after ww2)

I am always confused when thinks who was wrong or right?

Man u know this man deserves this or u can say more than this....