Review: Rage of the River by Hridayesh Joshi

The rain was pouring down that morning in June as we (I was a member of Uttarakhand’s Wildlife Board then) deliberated on Uttarakhand’s Eco-Sensitive Zones (ESZ) at a meeting in Dehradun. It was a fraught, tense meeting, where we made our case against a resistant state for creating meaningful ESZs, and giving a degree of graded protection to eco-fragile areas – including around the Kedarnath Wildlife Sanctuary, outside which the holy shrine of Kedarnath stands. Even as we reasoned that ESZs were not prohibitive in nature, but regulated land use; and that local communities needed to be involved in taking decisions on polluting industries, hydro electric projects, and mega-tourism projects, we were told that it was ‘anti-development.’ Anti-people.
Roads (and more roads), hotels (and more hotels) dams (and more dams) had to built.
By the time we stepped out of the meeting, a deluge had engulfed the state, the clouds had burst and the river Mandakini was in a rage, lashing out, swallowing everything in its path. The man-made natural disaster would eventually kill thousands, cause untold suffering and alter the lives of the resilient hill folk of Uttarakhand forever.
I mulled over the tragic irony of that meeting, even as the storm raged outside: here were the powers-that-be thrusting what they deemed as development on a fragile country and its people, who bore the terrible cost.
It is this story that is recounted, in bone-chilling detail in Hridayesh Joshi’s Rage of the River, originally published in Hindi with the evocative title Tum Chup Kyon Rahe Kedar? Joshi is senior editor, National Affairs, NDTV India, and with his colleague, Siddharth Pande, was among the first to reach when disaster struck Kedarnath. He stayed through its terrifying aftermath. 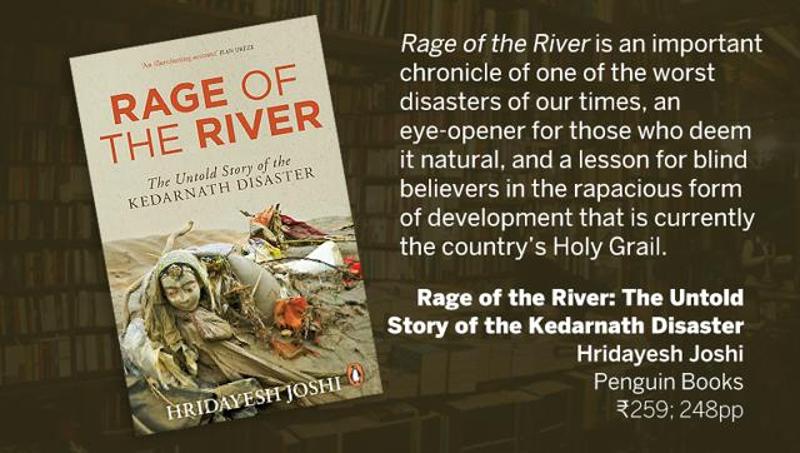 The first part of the book is reportage and barring one or two remarks that are trademark TV ie “We told the world for the first time,” it breaks the format of breaking news, goes in-depth and digs out the story behind the story. Rage of the River presents the stories of those who lost their lives, those who survived, of the amazing everyday heroes, and talks of the generosity and warmth of the hill people, even in the most crushing circumstances.

Equally importantly, it brings to the fore the apathy of an inert, indifferent administration which did not react, or act, when the tragedy unfolded. Indeed, the then Chief Minister Vijay Bahuguna, when informed of the disaster did not visit the Kedar Valley, choosing to go instead to Delhi to hold a press conference to falsely extol the government’s exemplary disaster relief work. Joshi minces no words in questioning political and administrative incompetence and apathy, or policies that cater, not to the common people but to powerful business, hydel, and real estate lobbies.

Joshi points a finger at the unethical practices of construction companies, contractors and operators of hydel dam projects, even in the face of this monumental disaster. The officials of the Vishnuprayag project refused to listen to the pleas of the villagers to open the dam gates and allow the excess water to flow safely from under the barrage. The advice was ignored, either in ignorance of the gravity of the situation, or with an eye on the opportunity to generate more power. The rising waters broke the barrage flooding the valley and its villages.