Researchers from the Tribler project at Delft University of Technology are proposing a new set of rules that should significantly improve the download speeds of many BitTorrent users. The new “Superior Seeding Standard” implemented in the latest release of the Tribler BitTorrent client is inspired by the ratio-enforcement policies at private tracker communities, but doesn’t discriminate against people with low bandwidth connections. 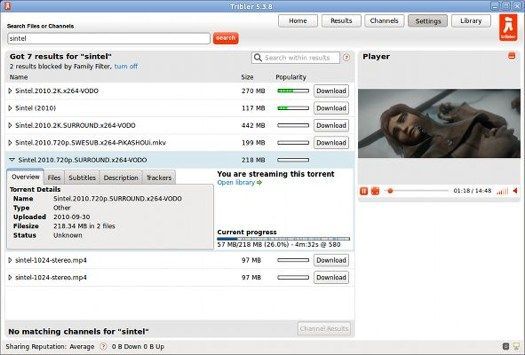 Some scientists devote their lives to finding a cure for terminal illnesses, others hope to discover new planets in galaxies far away, but there’s also a group of scientists mostly concerned with improving BitTorrent. The Tribler team at Delft University of Technology are such a group, and they have found a way to improve download speeds for BitTorrent users who are committed to sharing.

Tribler’s BitTorrent client has been in development for more than 5 years and continues to deliver experimental improvements and innovative ideas. Last year Tribler became the first truly decentralized BitTorrent client that doesn’t rely on central trackers, or even BitTorrent search engines. But the researchers have more in store.

The latest innovation from the Tribler team is promising something all BitTorrent users are interested in – faster downloads. The researchers came up with what they call a Superior Seeding Standard, a set of rules that reward users who put the most effort into sharing. The new standard is an alternative to the current tit-for-tat algorithm and is inspired by the ratio-enforcement policies often seen at private BitTorrent trackers.

The researchers have carefully analyzed the effectiveness of private BitTorrent trackers and found that users achieve great speeds, but that the ratio requirements also discriminate against users who don’t have high-bandwidth connections.

The Tribler team proposes a new standard which rewards BitTorrent users independent of their connection limitations. Instead of looking at the share ratio alone, it uses the ‘seeding effort’ to reward BitTorrent users by giving them priority in the swarm and thus faster downloads. Again, all of the above works without a central server.

The Tribler team ran several experiments with their new Superior Seeding Standard and found that the download speeds for people who share fairly are greatly improved compared to current transfer speeds on public trackers. The initial results suggest that it is more fair to people who are good BitTorrent citizens than the classic tit-for-tat algorithm.
“One of the problems with tit-for-tat is that it provides no motivation for seeding the terabytes of long-tail content that’s out there on BitTorrent,” Tribler leader Dr. Pouwelse told TorrentFreak. “We believe that people should be rewarded with priority downloads when they are seeding these more obscure files, especially the stuff which only gets a few downloads a month.”
“The ‘seeding rewards’ concept has been in the making for several years. It always required a central server, but we finally made it work in a truly decentralized manner with robustness against cheating. We implemented a first version of this proposed ‘Superior Seeding Standard’ in the latest Tribler release, and we expect that it will be tweaked and optimized quite a bit in the years to come,” Dr. Pouwelse added. “


The full technical specifications and several performance tests are detailed by these scientists in the paper titled “Fast Download but Eternal Seeding: The Reward and Punishment of Sharing Ratio Enforcement,” which will be presented at the P2P 2011 conference later this year.


As is true for many of Tribler’s innovations, getting it adopted by other BitTorrent clients will prove to be a tricky endeavor. Those who install Tribler will nonetheless notice that the concept of an entirely decentralized and fast BitTorrent network is already reality. The next and final step is to make it anonymous, that would certainly justify the millions of euros in tax money that has gone into the Tribler project in the last few years.
You must log in or register to reply here.
Similar threads
To Improve Transparency, British Government To Force BBC To Reveal Salaries Of Their Star
In Pak, Sushma will find ways to improve ties
Swachh Bharat Abhiyan fails to improve sanitation in Jammu
How to improve collegium system
India’s rank may improve on WB list over ease of doing biz:
Share:
Facebook Twitter Pinterest WhatsApp Link
Top