Remembering the 1st Anniversary of the Oak Creek shooting

Yesterday marked one year since the horrific killing of six innocent Sikhs in Oak Creek,USA when a white supremacist opened fire on them. The gunman, who also wounded five worshippers and an Oak Creek police officer, killed himself in the same parking lot.

See the video below


On Aug. 5, 2012, a white supremacist killed six and injured three at a Sikh temple in Oak Creek, Wisconsin. Why doesn't America talk about it?
By: Jessica Testa, Buzzfeed 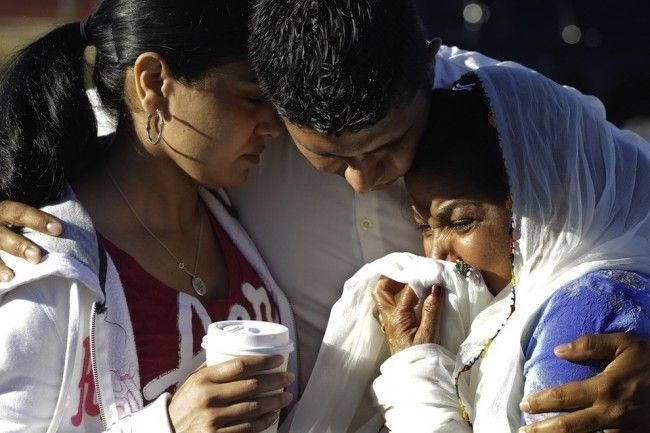 Amardeep Kaleka, son of the president of the Sikh Temple of Wisconsin, comforts temple members on Aug. 6.

Wade Michael Page didn’t speak to his victims before killing them. One year ago Monday, he “just began shooting.”


On Aug. 5, 2012, Page walked into the Sikh Temple of Wisconsin with a 9-millimeter semiautomatic handgun. The 40-year-old Army veteran and skinhead musician killed six worshippers and wounded three others before an Oak Creek police officer shot him down.


It was an act of hate — “domestic terrorism” — carried out on a group of people gathered to pray. As filmmaker and civil-rights advocate Valarie Kaur told BuzzFeed before Monday’s one-year anniversary of the massacre, “Oak Creek was the largest single tragedy in Sikh American history, but it was also the largest hate-based mass shooting in recent U.S. history.”


And yet when Americans talk about the tragedies of 2012, Oak Creek often goes unmentioned. At the time, it was overshadowed by the theater shooting that claimed 12 Colorado moviegoers two weeks earlier. Then it was shuffled offscreen by 24/7 Olympics coverage and a presidential election, as campaigns tried to find ways to attack each other while respecting the tragedies. 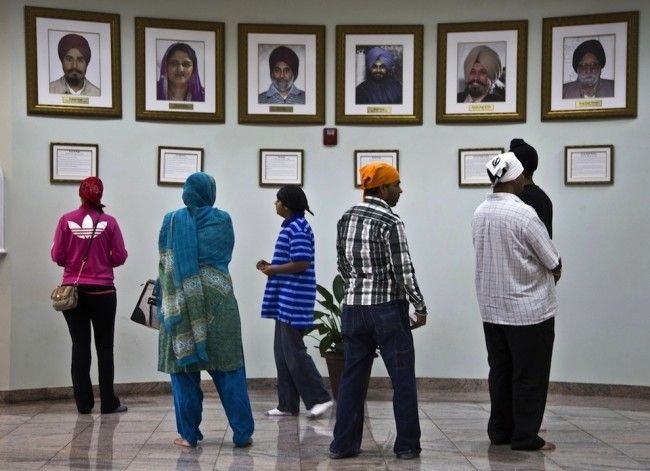 A memorial near the entrance of the Sikh Temple of Wisconsin.


“With the exception of CNN, which continues to broadcast much of its prime-time programming live from Wisconsin, the major networks have not sent their anchors to Wisconsin and have given significantly less coverage to the shooting,” Byers wrote. “Moreover, the Sikh temple shooting has not launched the national mourning that followed the shooting in Aurora.”


Early on in Oak Creek’s aftermath, critics offered up their own theories on why the shooting went under-covered.


“[This] shooting was …. greeted with a sense of resignation: Yet again,” Rene Lynch of The Los Angeles Times wrote, alluding to the public’s fatigue with such tragedy. “It’s the fourth such rampage this year alone.”


Byers speculated that the shootings were covered differently because they carried different degrees of drama: “In Colorado, the suspect was still alive (adding the promise of a dramatic court appearance). In Wisconsin, the suspect was killed on the scene.”


There’s an element of foreignness. James Holmes attacked a movie theater, a place we’ve all been to; Wade Page attacked a Sikh temple, a place many of us will never go to.


“I think some of it has to do with the fact that the people who shape discourse in this country by and large aren’t Sikhs and don’t know many if any Sikhs,” Robert Wright wrote in The Atlantic.


Kaur, a Sikh-American and California native who has spent the last year working on a documentary about the Oak Creek shooting, criticizes the “regrettable” and “partial truth” initial coverage of Oak Creek, but she’s even more critical of the lack of sustained media attention.


“I suspect that the coverage was less extensive because major media outlets and viewers felt that the story was about a community separate from their own,” she says. 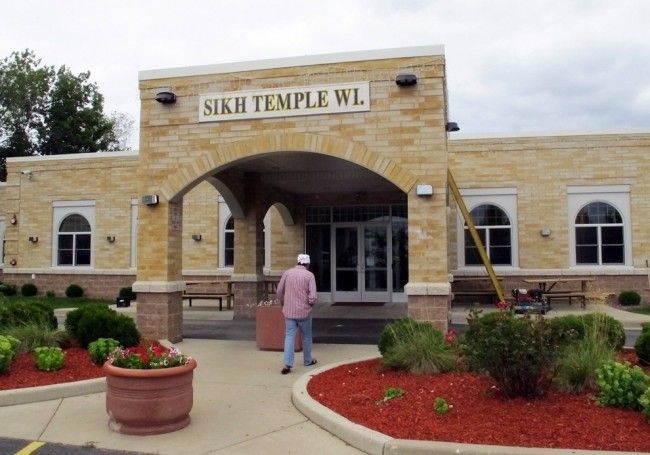 There’s also a sense among those living, working, and worshipping in Oak Creek that the shooting and its impact on the Sikh community was too complex to capture in the handful of days the national media spent in Oak Creek.


“On one hand, this terrible thing happened, but we translated that grief into really powerful energy that was incredible to watch,” says Gurmukh Singh, a volunteer at the temple. “On some level, I don’t think anyone could have done that justice.”


Singh says the “outpouring of love” in the attack’s aftermath has been “unbelievable, and I mean that sincerely … It’s almost surreal, the amount of recognition and support from people that aren’t Sikh.”
As soon as the FBI turned the temple back over to its members, volunteers got to work cleaning the stained floors, filling in bullet holes, and painting the walls. They started raising money for a memorial and scholarship fund. As part of the anniversary program this weekend, the temple hosted a 6K run — one kilometer for each victim — and a traditional three-day prayer. A vigil is also scheduled for Monday night. 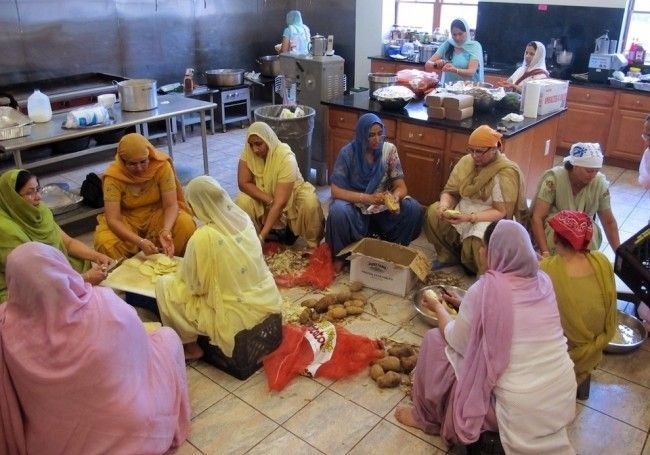 Women gather in the kitchen to prepare one of the free meals offered daily at the temple.

Two weeks ago, Aurora survivors and victims’ families were going through their own anniversary rituals, but with one key difference.
The shootings in Aurora and Newtown are largely viewed as shifting points in the gun control debate. Networks and newspapers have devoted much time and space to the pleas of victims and families calling for gun reform. Oak Creek has been noticeably absent from that conversation.


Robbie Parker, the father of a girl killed at Sandy Hook Elementary, appeared beside Sikh leaders at the memorial 6K on Saturday. He spoke about peace and forgiveness. He didn’t speak about gun control.
“It’s a touchy subject, and I think we’ve very deliberately stepped out of the spotlight,” Singh says. “There’s a time and place for politics, and I don’t think that this is the time or place.”


While gun control is “touchy” within the Sikh-American community, most can agree on standing against violence, Singh says. Dubey is more outspoken about the issue: “We don’t want to snatch up people’s guns or weapons, but we should have background checks,” he says. “We should not give guns to psycho people.”


Mayors Against Illegal Guns, a Bloomberg-helmed advocacy organization that shares Dubey’s views, will be present at Monday’s memorial vigil, much like it was in Aurora two weeks ago. But Oak Creek remains out of focus for gun control advocates — another reason this tragedy may have received less airtime than the other, more politicized shootings. 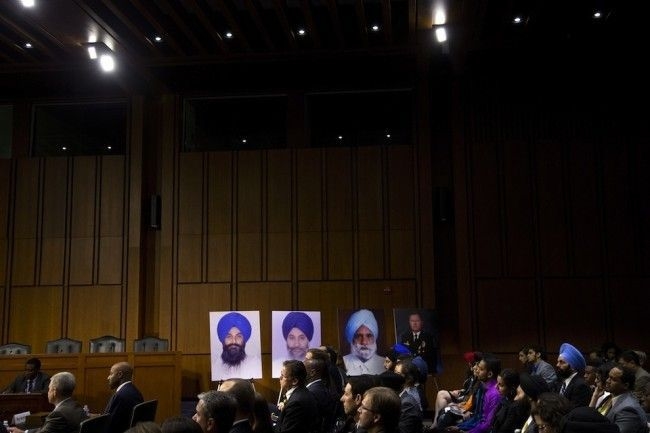 Photographs of the victims of the attack line the walls during a hearing on Capitol Hill on Sept. 19, 2012.

Still, being ignored by the media is in many ways the least of the temple’s worries.


“A tragedy is a tragedy. It makes very little sense to talk about these things comparatively,” Singh says. “Given the nature of the incident from last year, it could have easily caused us to become isolated and insulated and self-segregated. Instead, we’ve opened up.”


Before the shooting, the Sikh Temple of Wisconsin members “were kind of reserved and reluctant to talk in public,” like many immigrant communities, Dubey says. “After the shooting happened, every person in the temple pretty much stepped up to talk about religion. Now we have guests from outside, interfaith presentations and mentoring program for kids and teenagers.”


The Sikh community is determined to make something meaningful out of the tragedy in Oak Creek — Singh and Dubey with their renovations and outreach, and Kaur with her documentary.

Re: Remembering the 1st Anniversary of the Oak Creek shootin

Re: Remembering the 1st Anniversary of the Oak Creek shootin