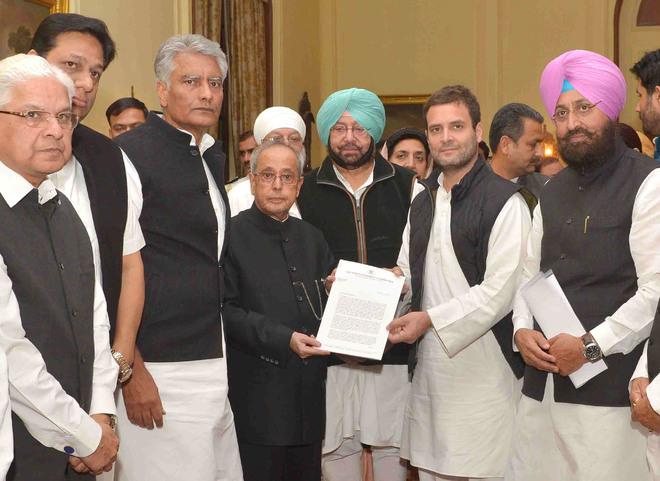 Congress vice-president Rahul Gandhi today led a 25-member delegation of the Punjab Congress to the President to seek an independent judicial probe into the recent incident of sacrilege of Guru Granth Sahib at Faridkot and subsequent police firing that left two persons dead.
“We have demanded a probe by a sitting judge of the Supreme Court. The issue is not just of these two families who lost their kin but of the entire state. The Punjab Chief Minister has not been able to deliver justice to the people of the state,” Rahul Gandhi said after meeting President Pranab Mukherjee.
The state unit’s demand for a fair judicial inquiry into the incident was articulated today by both Punjab Congress president Partap Singh Bajwa and former Chief Minister of the state Capt Amarinder Singh. These two leaders presented a united face again as they stood by the side of Rahul to talk about the people of Punjab.
Bajwa spoke first and said that the FIR in the entire incident was “blank”.
“It was cold-blooded murder. Peaceful protesters were fired at with an AK-47. Only a time-bound judicial probe by a sitting Supreme Court judge can go to the root of this incident. That’s what we have sought today,” incumbent Punjab Congress chief said handing over the dais to Capt Amarinder who seconded Bajwa’s demands and added to them.
Captain’s take was that the CBI probe ordered into the incident by the Punjab Government was silent on probing the role of the state police in the firing at peaceful protesters killing two people and later rounding up innocents in the issue.
“SSP Moga ordered the firing at the peaceful protest in Faridkot in mid-October killing two people. Later again in the violence, 40 people were injured. Two innocent persons were caught in the case. They even rounded up the ‘granthi’ of the gurdwara from where parts of Guru Granth Sahib had gone missing only to resurface later in a torn state. The FIR mentions no names. This FIR and a CBI probe will get us nowhere. We need an independent judicial probe by a sitting SC judge or a sitting high court judge so that the responsibility of the police is fixed and heads roll right to the top,” Capt Amarinder Singh said.
You must log in or register to reply here.
Similar threads
Resolve state leadership issue, Jakhar tells Rahul
Punjab News Rahul Gandhi ਨੇ ਪੇਸ਼ ਕੀਤਾ Resign, CWC ਨੇ ਠੁਕਰਾਈ ਪੇਸ਼ਕਸ਼
Punjab News Rahul Gandhi ਦਾ ਵਿਰੋਧ ਕਰ ਰਹੇ Manjit Singh GK Arrested
Punjab News Chowkidar ਬਣ ਬੁਰੇ ਫਸੇ Modi, Rahul ਵੀ ਆਏ ਅੜ੍ਹਿਕੇ
Rahul ਤੇ Priyanka Gandhi ਲੁੱਟਣਗੇ Mela, Modi ਪਏ ਫਿੱਕੇ
Share:
Facebook Twitter Pinterest WhatsApp Link
Top