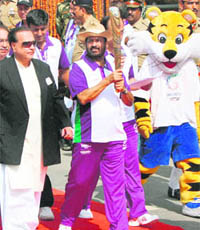 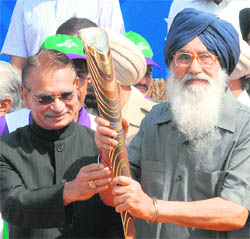 Punjab Governor Shivraj Patil hands over the Queen’s baton for Commonwealth Games to CM Parkash Singh Badal at the Wagah border on Friday.

The 100-day countdown for the New Delhi Commonwealth Games began today when the Queen’s Baton Relay (QBR) arrived in India from Pakistan through the historic Wagah-Attari border amid much fanfare here.

The Queen’s Baton Relay was launched by Queen Elizabeth II at the Buckingham Palace in London on October 29 last year in the presence of Indian President Pratibha Patil.

It will now pass through all the states and union territories before reaching its final destination, Jawaharlal Nehru Stadium — venue for the opening ceremony, on October 3.

Shera, the official mascot of the Commonwealth Games, entertained spectators, who also enjoyed performances by late Pakistani singer Nusrat Fateh Ali Khan’s nephew Rahat Fateh Ali Khan and Wadali brothers. Folk dances, however, lacked the usual life and spirit even as the organisers tried their best to showcase Punjabi, Kashmiri, Himachali and Haryanvi cultures by coming out with dance performances.

Pakistani onlookers showed an equally warm response to the baton on the other side at Wagah where they were seen waving their hands to express their enthusiasm.

Kalmadi, flanked by Shera, received the baton amid loud cheers from the spectators of both the countries and passed it on to Fennell, who arrived here specially to attend the function.

Fennell handed it over to Delhi Chief Minister Sheila Dikshit and then the baton, which is nearing the end of its 190,000-km journey covering 71 nations and territories across the world, passed over to 21 dignitaries, including Minister of State for External Affairs Preneet Kaur, Punjab Governor Shivraj Patil and Punjab Chief Minister Parkash Singh Badal.

Badal virtually stole the show by saying that all they needed now was to request the Governments of India and Pakistan to open these gates. “We (India and Pakistan) are like brothers and for how long can two brothers keep their door shut to each other?” Recalling his graduation days in Lahore, Badal told the Punjab (Pakistan) Governor Suleman Taseer as to how passionately he still remembered drinking lassi at the Lahore Anarkali Bazar.

Taseer, too, echoed similar sentiments. He said it was an opportune moment to hand over the baton to India at a time when the Foreign Secretaries of both countries were holding parleys in Islamabad for the improvement of bilateral ties. “I am happy to see the people of both countries responding to the baton relay with the same degree of enthusiasm,” he said.

Patches of mismanagement also dotted the ceremony on the Indian side as visitors, even some VIPs were seen vying for seats and a limited number of mineral water bottles in sweltering heat conditions.