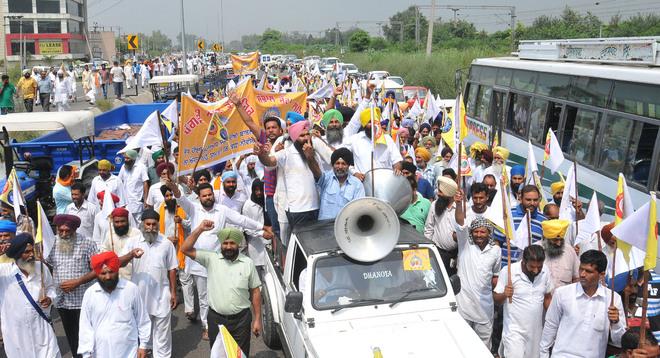 Road and rail traffic remained paralysed in the region as thousands of farmers from across the state squatted on the Jalandhar-Phagwara national highway near Rama Mandi and Dhanowali railway crossing for more than seven hours today.
The farmers had been protesting the alleged government inaction over a raw deal meted out to cane growers by millers by not disbursing their Rs 250-crore dues last year and announcing to shut down their mills in the coming season.
The protest ended after Cane Commissioner Ranjit Singh and Director Agriculture Mangal Singh Sandhu gave a written assurance to them on their demands, including getting their pending payments cleared for 2014-15, getting all sugar mills started by November 15 and getting entire sugarcane produce lifted by mills in time. The protest was held under the banners of Pagri Sambhal
Jatta, Doaba Kisan Sangharsh Committee and Punjab Potato Growers Association. Farmers had started assembling here since 7 am. They pegged huge tents, set up a public address system and blocked one side of the highway around 9.30 am.
They then sat on the railway crossing and announced that no train would be allowed to cross that point. The agitating farmers, each one of them carrying a banner using sugarcane as flagstaff, were spread out on a 2-km stretch of the road.
While the road traffic was diverted from Rama Mandi Chowk via Cantonment and Talhan village routes, about 12 trains remained stranded at various nearby stations. The Amritsar-bound Shatabdi also remained stuck at Phagwara.
Dilbagh Singh Happy, a cane grower from Gunopur village in Gurdaspur, said, “The Mukerian sugar mill authorities have not cleared my payment of around Rs 4 lakh since December last. The government has made payment to cooperative mills. The farmers who have their dues pending with private millers are the real sufferers.”
Pagri Sambhal Jatta convener Kamalpreet Singh said they held a similar protest at the Mukerian railway crossing on August 20. At that time also, the administration had given them a written assurance, but it failed to honour its promise. “Instead, they got an FIR registered against all participating farmers. We hope we will not meet the same fate again,” he said.
Senior police officers were present there to control the situation.
You must log in or register to reply here.
Similar threads