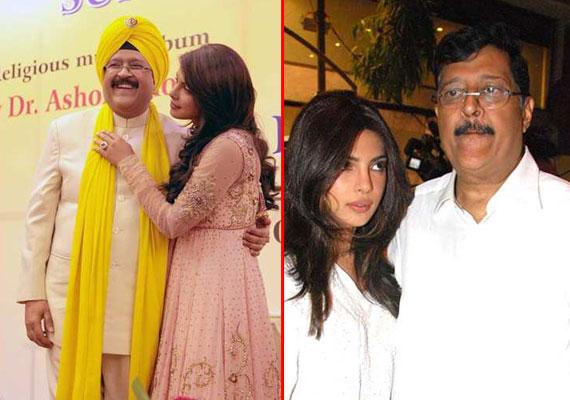 Mumbai, June 10: Bollywood star Priyanka Chopra's father Dr Ashok Chopra passed away after fighting a losing battle against cancer at Kokilaben Hospital here today. A retired doctor from the army, he was in a critical condition for the last seven days.
Priyanka had cancelled her film rehearsals because of her ailing father. She was doing rehearsals for Omung Kumar's biopic on boxer Mary Kom.

Dr Chopra was diagnosed with cancer in 2005, when Priyanka was shooting for Rohan Sippy's movie Bluffmaster.

Dr Chopra had been undergoing treatment since then after which his condition had improved. The cancer was detected again.

A few days ago, Priyanka had tweeted a picture of her with her father and wrote, "My Dadd Strongest..."

The picture showed Priyanka holding her father's hand in a supportive gesture inside Kokilaben Hospital.

Priyanka had avoided talking about her father's illness to the media and was keeping mum.

Surely the actress must be recalling her sweet melodies with her lovable father who would rest in peace now.