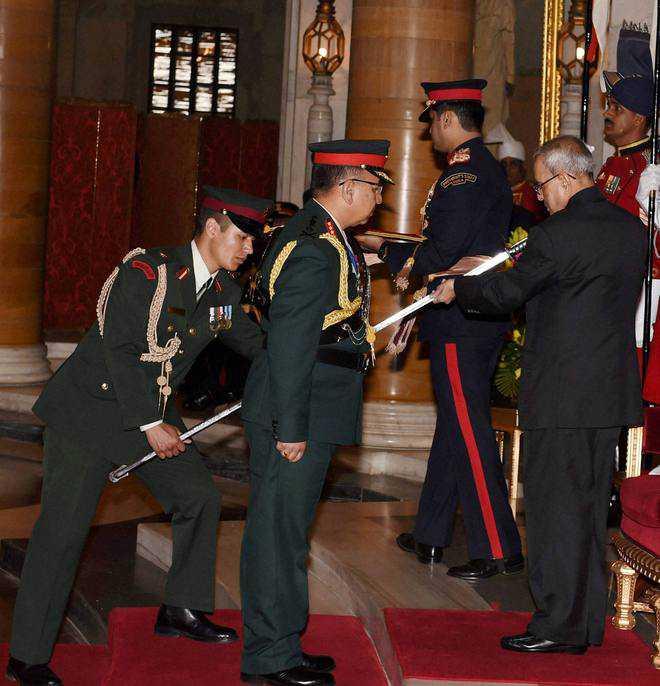 In a minor diplomatic coup, India, despite its existing strained relations with Nepal, today conferred Nepalese army chief General Rajendra Chhetri with the honorary rank of General of the Indian Army.
Notably, despite the prevailing irksome issues, New Delhi was keen that General Chhetri visits India first instead of opting to visit China. As India maintains a large hold over Nepal, China has been trying to woo the Himalayan country with sops. This is General Chhetri's first 'port of call' after taking over as chief of Nepalese army in September 2015.
General Chhetri was accorded the rank by President Pranab Mukherjee at an investiture ceremony at Rashtrapati Bhavan today.
It is a custom and tradition between the Indian and Nepalese army to confer this honour on each other's chief to signify close and special military to military ties. Indian Army Chief General Dalbir Singh was conferred the rank of General of the Nepalese army in November 2014 when he visited the Himalayan nation.
General Chhetri is on a six-day visit to India. He shall be visiting the Infantry School and Army War College at Mhow and the Artillery School at Deolali wherein he shall be witnessing the training and facilities at Indian Army premier training institutes. During his visit to Lucknow, the General shall be interacting with top military hierarchy of Headquarters Central Command and shall also visit the Gorkha Rifles Regimental Centre.
You must log in or register to reply here.
Similar threads
Bihar ki beti’ to be Oppn’s candidate for Prez vs Kovind
Maulvi, living on Prez Estate for 42 years, detained by cops for seven hours
New govt will go if Prez rule quashed: SC
Rahul, state leaders meet Prez, seek judicial probe
Cong raises Modi silence with Prez
Share:
Facebook Twitter Pinterest WhatsApp Link
Top