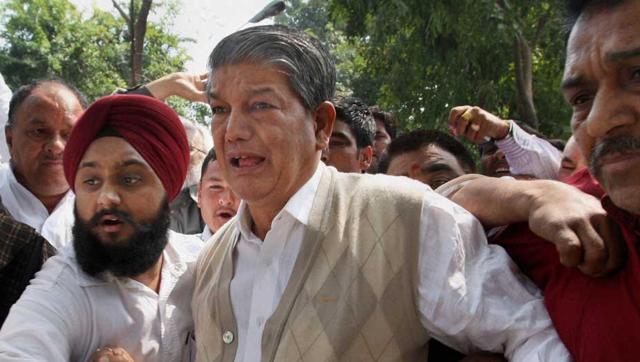 President’s Rule was imposed in Uttarakhand on Sunday after the political crisis reached a cliffhanger of sorts on Saturday night, with reports emerging that Speaker Govind Kunjwal had disqualified nine rebel MLAs of the ruling Congress.
President Pranab Mukherjee signed the proclamation under Article 356 of the Constitution, dismissing the Congress government headed by Rawat and placing the assembly under suspended animation on the recommendation of the Union Cabinet.
The dismissal of the Rawat government now renders Monday’s confidence vote infructuous.
Kunjwal’s move may alter the political equation in the state, providing a lifeline to chief minister Harish Rawat – who has to prove his government’s majority in the 70-member assembly on Monday.
“The Bharatiya Janta Party is defying everything the Constitution stands for. They are indulging in horse-trading,” Congress spokesperson Sanjay Jha told a television news channel.

Rawat earlier condemned the “threat” by the Centre to impose President’s Rule. “It is not acceptable in a parliamentary system. There is a procedure for President’s Rule, which has emerged following precedence,” he told reporters on Sunday.
Rawat also accused the BJP of attacking the democracy with money and muscle power in its bid to dislodge his four-year-old Congress government.

Rawat said the BJP was not relying on the people’s mandate and accused it of using money power to overthrow the government in Uttarakhand. “It is low-level politics.”
Rejecting suggestions there is a division within the Congress that has led to the current crisis, Rawat said: “We do not have any internal tussle. It is BJP and RSS which are hobnobbing with the Congress rebels to create the crisis.”
News agency PTI reported that Prime Minister Narendra Modi convened a late-night cabinet meeting on Saturday in Delhi, where he was said to have discussed the Uttarakhand crisis and the possibility of imposing President’s Rule. The talks came hours after a sting video aired by a local channel purportedly showed 69-year-old Rawat striking a multi-crore deal for bringing rebels back into the party fold.
Rawat said an “unholy alliance” led by Modi and BJP chief Amit Shah was behind the sting, accusing the saffron party of orchestrating the crisis.
Meanwhile, the rebel lawmakers – led by former chief minister Vijay Bahuguna – supported the BJP legislators’ demand for a conscience vote at the assembly’s budget session on March 18. But if the nine MLAs are disqualified now, the strength of the assembly will be reduced to 61.

Rawat may get the support of 27 Congress MLAs and six others, bringing the total number to 33. However, speculations are rife over how the Centre plans to prevent the situation from working out in the Congress government’s favour. It has already received a report from governor KK Paul on the crisis.
Modi had cut short his visit to Assam, where he was addressing election rallies in view of the upcoming elections, to call the hour-long emergency cabinet meeting. There was no official confirmation about the topic of discussion, but sources told PTI that another meeting would be held on Sunday before a final call was taken on the matter.
Maintaining that the Uttarakhand government has a majority in the assembly, the Congress leadership denounced attempts to pull down a “duly elected government” on the basis of a “farcical sting operation”.
At a hurriedly convened press conference at the Congress headquarters here, party general secretary Ambika Soni said the BJP was desperately trying to dislodge the state government by imposing President’s Rule.
A BJP delegation had met President Pranab Mukherjee earlier in the day to state that Rawat has no right to continue after being “exposed” in the sting video. Its memorandum to the President was also critical of the governor, alleging that he “did not act on the request of the majority of the legislature to dismiss the state government”.​
You must log in or register to reply here.
Similar threads
Stunned over new Rs 1,000 rule woman dies of shock outside bank in Gorakhpur
New govt will go if Prez rule quashed: SC
PDP chief looks to Delhi, BJP to her, J-K to more of Guv rule
Constitution Bench to rule on gay rights
IRCTC Announces New Rule For Online Ticket Booking w.e.f February 2016
Share:
Facebook Twitter Pinterest WhatsApp Link
Top