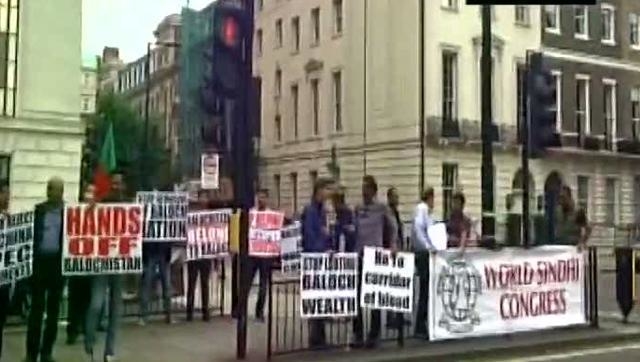 Baloch and Sindhi leaders protested jointly against the ongoing China-Pakistan Economic Corridor (CPEC) in Balochistan outside the Chinese embassy in London.
This is a first such joint protest by the activists belonging to different organisations for a common purpose of ceasing CPEC activities and preventing gross human rights violations.
The umbrella protest includes the Sindhi Baloch Forum (SBF), the World Sindhi Congress (WSC), the Baloch National Movement (BNM), the Baloch Republican Party (BRP), the Baloch Human Rights Council UK (BHRC-UK), the Baloch Students’ and Youth Association (BSYA) and the Baloch Students’ organisation.
The protest was attended by activists and nationalist leaders who shouted slogans against Pakistan security agencies for committing gross human rights violations in the name of a economic pact.

ANI ✔ @ani_news
Want to tell Pakistan and China that they can do nothing in Balochistan without the consent of Baloch people: Baloch leader Noordin Mengal

Hakeem Wadela, a Baloch activist, told ANI, “We are protesting outside the Chinese embassy against the CPEC. Pakistan wants to forcefully impose the CPEC on Balochistan. We are being shown as a minority community...whatever we are doing...it’s for our basic rights.”
They claimed that thousands of people were displaced to facilitate a wide array of projects under the CPEC without a proper plan of rehabilitation or providing any compensation.
World Sindhi Congress chairperson Laku Luhana told ANI that the CPEC was not an economic project, but rather a matter of life and death for the Baloch and the Sindhis.

“It is a project of capture on our land and coastal lines. This is not an economic project. It is a matter of life and death for the Baloch and the Sindhis. We will never agree to this project,” he added.
“Prime Minister Narendra Modi for Balochistan” and “Kadam Badhao Modiji hum tumhare saath hain” slogans were raised in the protest here.
The Baloch and the Sindhi activists also raised slogans like “No to CPEC” and “Hai haq humara aazadi”.
Activists, both at the international and the local level, have been raising their voices against the CPEC, dubbed as a ‘game changer’ by the Pakistani establishment.
Niaz Baloch told ANI that they want to give the message that the Baloch will never accept the CPEC.
“China and Pakistan want that Balochistan bows down. They want to give the resources of Balochistan to Punjab and China. We will stand against it,” he added.
The protest at Portland Place, opposite the Chinese Embassy, also showed that the demonstrators were eyeing larger support from the world community.
Noordin Mengal, another Baloch activist, said they want to tell Pakistan and China that they can’t do anything without their consent.
“They (China and Pakistan) want to snatch, scare and oppress. They are doing it today as well. Till the time, they are getting benefited, they do not care about our lives. They do not care about us, nor do they have any sympathy for us,” he added.
The $46 billion economic pact has been projected as a major boost for the economy by the Pakistan government, but locals in Balochistan say they have not benefited one bit from the CPEC.
The life of the people has become more miserable after the government’s ambitious CPEC project saw the light of day.
The ecology of the area has also been deeply disturbed, and the entire region has repeatedly faced natural disasters.​
You must log in or register to reply here.
Share:
Facebook Twitter Pinterest WhatsApp Share Link
Top