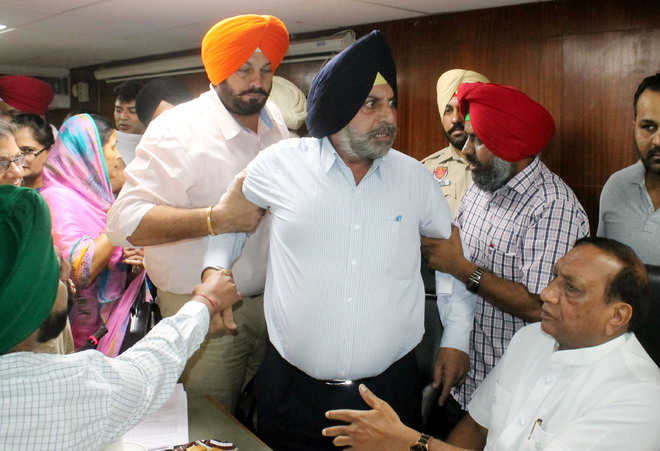 Ruckus marred the Mohali Municipal Corporation House meeting with the MC Commissioner and the Deputy Mayor trading corruption charges, using unparliamentary language and daring each other with closed fists at the MC Bhawan in Sector 68 here today.
Councillors joined Deputy Mayor Manjit Singh Sethi against MC Commissioner Uma Shankar Gupta, who walked out of the meeting along with his staff during the proceedings. The Mayor then adjourned the meeting.
The meeting, which lasted an hour and a half, did not see any discussion on any of the 18 items on the agenda.
The meeting started on an unpleasant note as Mohali Mayor Kulwant Singh expressed displeasure over the working of Gupta and his staff. The Mayor backed Congress councillor Kuljit Singh Bedi’s allegations of MC officials being hand in glove with rehriwalas and the “inefficient” working of the MC Ccommissioner’s staff in conducting their survey. The MC Commissioner retaliated, alleging that a number of councillors were patronising illegal rehriwalas.
Tempers ran high when the MC Commissioner asked his staff to make the names of these councillors pubic.
The situation took an ugly turn with the announcement of the first name on the list — that of Deputy Mayor Manjit Sethi. While Akali-BJP councillors were seen thumping the tables, Sethi started levelling allegations of corruption against the MC Commissioner and his staff. Gupta also retaliated and both indulged in heated arguments for nearly half an hour. Later, Gupta alleged that Sethi tried to manhandle one of his superintendents, who had prepared the list.
However, Sethi refuted the charge. As the list also contained names of some Akali-BJP councillors, they changed their stand and started supporting Sethi against Gupta.
The councillors demanded an unconditional apology from Gupta after which he left the meeting midway.
List of councillors and others ‘patronising’ illegal vendors
Balbir Singh Sidhu (MLA, Mohali), Harinder Singh Chandumajra (son of Prem Singh Chandumajra), Manjit Singh Sethi (Deputy Mayor), Sarabjit Singh (Kulwant Singh’s son), Rajinder Sharma, Rama, Kuljit Bedi, Raj Rani, Jasbir Singh, Rajinder Singh, Ramandeep Kaur, Bindra, Ashok Kumar Jha, Arun Sharma, Paramjit Singh Kahlon, Shinderpal Singh Sohana, Parwinder Singh Sohana, Amrik Singh Mohali, Parkashwati, SP Sohal, SP Jagjit Singh, Jagtar (munshi, Vigilance), DSP Rajinder Singh and Parwinder Singh.
Charges fly thick
Uma Shankar Gupta is a corrupt officer. He, along with his staff, takes commission from contractors, vendors and also uses government paraphernalia, including vehicles, for personal use. As I raised a voice against it, he targeted me by putting my name on the list.— Manjit Sethi, Deputy mayor
It was a pre-planned move. Sethi and some others targeted me as I raised a voice against their malpractices. Sethi and the others called me corrupt and nearly manhandled one of my staff members. I will report the matter to the state government. They have spoiled the decorum of the House.— Uma Shankar Gupta, MC Commissioner
Whatever happened in the House was uncalled for. I expressed my viewpoint regarding the working of MC officials in the House, but did not intend to target anybody. I will try to settle the things by holding another meeting.— Kulwant Singh, Mayor
The MC Commissioner and his staff levelled false charges of patronising illegal vendors against me. I may have asked some MC officials to spare some poor vendor, but never supported any illegal vendor to run his/her business. I will take up the issue with the disciplinary committee of the Vidhan Sabha against the MC Commissioner.
You must log in or register to reply here.
Similar threads
Liquid on Mars
Is That Actually A Woman On Mars
Isro's Mangalyaan Completes 100 Days in Mars Orbit
Nasa's Curiosity Rover Finds Organic Matter on Mars
Nasa's Curiosity Rover Finds Evidence for Lake on Mars
Share:
Facebook Twitter Pinterest WhatsApp Link
Top