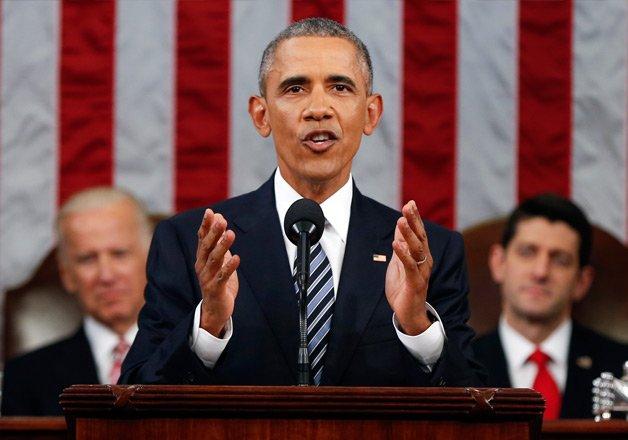 US President Barack Obama today said that 'instability will continue for decades' in many parts of the world including Pakistan have become safe havens for new terrorist networks.

In his final State of the Union Address, Obama said terrorist groups like Al Qaeda and ISIL (also known as ISIS Islamic State militant group) use the Internet to poison the minds of individuals inside the country and undermine American allies.

"Our foreign policy must be focused on the threat from ISIL and al Qaeda, but it can't stop there. For even without ISIL, instability will continue for decades in many parts of the world - in the Middle East, in Afghanistan and Pakistan, in parts of Central America, Africa and Asia. Some of these places may become safe havens for new terrorist networks," he said.

"Both Al Qaeda and now ISIL pose a direct threat to our people, because in today's world, even a handful of terrorists who place no value on human life, including their own, can do a lot of damage," he added.

He also specifically mentioned that fight against Islamic State is not World War-III.

"But as we focus on destroying ISIL, over-the-top claims that this is World War III just play into their hands. Masses of fighters on the back of pickup trucks and twisted souls plotting in apartments or garages pose an enormous danger to civilians and must be stopped. But they do not threaten our national existence," Obama said.

"That's the story ISIL wants to tell; that's the kind of propaganda they use to recruit," Obama added.

"We don't need to build them up to show that we're serious, nor do we need to push away vital allies in this fight by echoing the lie that ISIL is representative of one of the world's largest religions. We just need to call them what they are - killers and fanatics who have to be rooted out, hunted down, and destroyed," Obama asserted.

That's exactly what the US is doing, he said, adding that for more than a year, America has led a coalition of more than 60 countries to cut off ISIL's financing, disrupt their plots, stop the flow of terrorist fighters, and stamp out their vicious ideology.

"With nearly 10,000 air strikes, we are taking out their leadership, their oil, their training camps, and their weapons. We are training, arming, and supporting forces who are steadily reclaiming territory in Iraq and Syria," he said.

"If this Congress is serious about winning this war, and wants to send a message to our troops and the world, you should finally authorise the use of military force against ISIL. Take a vote. But the American people should know that with or without Congressional action, ISIL will learn the same lessons as terrorists before them," the President said.

During the address Obama further said: "If you doubt America's commitment - or mine - to see that justice is done, ask Osama bin Laden. Ask the leader of Al Qaeda in Yemen, who was taken out last year, or the perpetrator of the Benghazi attacks, who sits in a prison cell. When you come after Americans, we go after you. It may take time, but we have long memories, and our reach has no limit."

He said that America's foreign policy must be focused on the threat from ISIL and Al Qaeda, but it can't stop there.

"For even without ISIL, instability will continue for decades in many parts of the world - in the Middle East, in Afghanistan and Pakistan, in parts of Central America, Africa and Asia," he said.

"Some of these places may become safe havens for new terrorist networks; others will fall victim to ethnic conflict, or famine, feeding the next wave of refugees," Obama said.

"The world will look to us to help solve these problems, and our answer needs to be more than tough talk or calls to carpet bomb civilians. That may work as a TV sound bite, but it doesn't pass muster on the world stage," he added.​
You must log in or register to reply here.
Similar threads