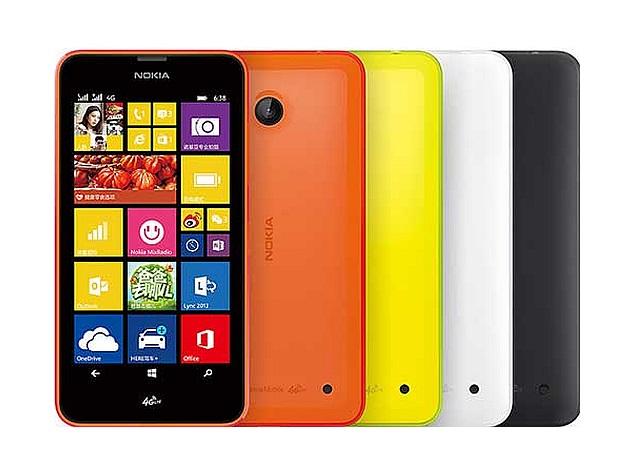 Microsoft on Tuesday has launched its affordable 4G smartphone in India dubbed the Nokia Lumia 638, which had made its debut in China earlier this year in June.
Priced at Rs. 8,299, the Nokia Lumia 638 will be exclusive to the company's newly launched Microsoft Brand Store on Amazon India, and will go up for pre-orders from Wednesday.

The Nokia Lumia 638 in India includes a 4.5-inch FWVGA (480x854 pixels) ClearBlack LCD display with Gorilla Glass 3 and a pixel density of 221ppi; a 1.2GHz quad-core Qualcomm Snapdragon 400 SoC; 1GB of RAM; a 5-megapixel rear autofocus camera; no front-facing camera; 8GB of built-in storage with expandability via microSD card (up to 128GB); an 1830mAh battery, and Windows Phone 8.1 with Lumia Denim update.

The new Nokia Lumia 638 by Microsoft will also come bundled with an exclusive offer on Airtel 4G. Consumers on Airtel postpaid in Bengaluru will get up to 5GB of free data on 4G for 2 months post activation of their Airtel connection on the new Lumia 638, and the offer will be available until March 31, 2015.

Speaking at the launch, Raghuvesh Sarup, Director - Marketing, Nokia India Sales Pvt. Ltd. (a subsidiary of Microsoft Mobile Oy), said, "With the Lumia range we have always focussed on delivering new experiences and features to our consumers at affordable price points. Now, we are introducing Lumia 638 which is the most affordable 4G smartphone on Windows Phone 8.1. It builds on the success of the Lumia range in the fast growing affordable smartphone segment and aims to address the consumers' demand for a device that lets them enjoy uninterrupted video content. We are confident of the success of the Lumia 638 as a comprehensive package and are certain that the device will help us consolidate our position in the affordable smartphones segment further."​
You must log in or register to reply here.
Similar threads
Nokia RM-1106 may be Lumia 940 with 5.2 inch 1080p screen
Nokia Lumia 630 Single SIM goes on sale in India
Nokia Lumia 630 launched in India
GTA San Andreas on the Nokia Lumia 925
Nokia Lumia 525 Review
Share:
Facebook Twitter Pinterest WhatsApp Link
Top