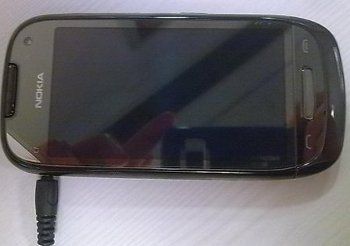 The C7-00 mobile has been reportedly confirmed for an official roll-out from Nokia shortly, owing to a string of XML codes that were added on Nokia’s website.

The XML codes apparently indicates the C7 will incorporate the latest Symbian^3 OS, and also reveals an nHD display with a resolution of 360x640 pixels.

It has been rumored that the images of the C7 phone were leaked online a week back. The images purportedly reveal the phone to be built with an 8 megapixel camera, a dual LED flash on its rear side and a front-facing camera present just above the screen of the phone.

The Nokia C7 has been reportedly said to include stereo speakers and a 3.5 mm audio jack as its prime features, along with a 3.5-inch screen. The XML code for the Nokia C7 is also said to indicate that an ARM-based CPU will power the device. The phone is also expected to feature 3G UMTS/HSPA, Bluetooth and WiFi. However, the disappointing news is that, both the pricing on the Nokia C7, as well as the date of its official launch are still kept undercover.
You must log in or register to reply here.
Similar threads
Nokia News
Nokia 8.1 Review with Pros & Cons
Nokia 8.1 Unboxing & Overview with Camera Samples (Retail Unit)
Nokia 7.1 Review: Not Your Father's Nokia
Nokia 3.1 Plus Unboxing and hands-on review
Share:
Facebook Twitter Pinterest WhatsApp Link
Top