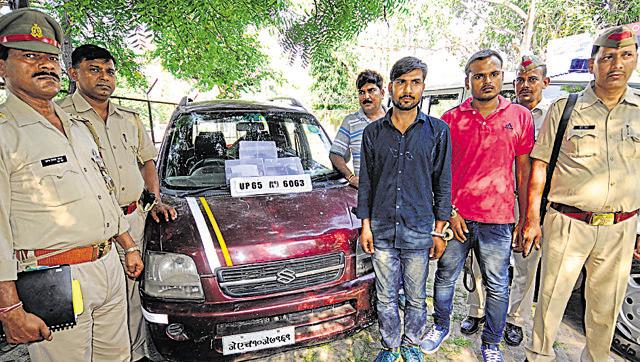 The Noida police claim to have foiled an abduction bid of an Amity University student, in which his cousin was allegedly involved.
On Thursday evening, a patrolling team of Phase 3 police station arrested Pappu Kumar Rai and Abhishek Kumar after a brief gunfight, police said.
During interrogation, it was found that they were going to abduct the cousin of their friend and demand a ransom of `5 crore from the boy’s father.
“A police checking team spotted a WagonR with a registration number of Jharkhand. When signalled to stop, the occupants left the car and tried to flee by firing in the air. The police team retaliated and nabbed both of them. We recovered one illegal revolver, a country-made pistol, sedatives and other tools that they were planning to use in the abduction,” said Pankaj Pant, station house officer, Phase 3 police station.
The police said Pappu Rai, has a factory of garment manufacturing in Lucknow. About 10 days back, his friend Abhliash, who hails from Ballia, approached him and said he wanted to abduct his cousin (son of his paternal aunt) who is a student of law at Amity University. The student’s father is an advocate.
“Pappu and Abhilash came to Noida and started staying in a rented accommodation. Pappu sought help from one of his friends Vicky, a resident of Sector 49 in the abduction. Vicky introduced them to his friends Abhishek and Iliyas and they started planning the abduction. They gathered weapons and other paraphernalia for the crime,” said Pant.
Police said they did a recce of the area more than three times. Meanwhile, Abhilash met his cousin to gain his confidence.
On Thursday evening at about 8 pm, accused Pappu and Abhishek started from Sector 49 in a WagonR car to abduct the victim from his rented accommodation at Sector 126. They were, however, intercepted by a police team near Parthala village.
“Accused Abhliash, Iliyas and Vicky are still on the run. An FIR has been registered against them and a manhunt launched to arrest them. Pappu and Abhishek were produced in the court and were sent to jail,” said Pant.
You must log in or register to reply here.
Share:
Facebook Twitter Pinterest WhatsApp Share Link
Top