54 Punjabis back home from LebanonRajasansi, July 22
As many as 54 Indians, all from Punjab, today arrived at the Rajasansi International Airport, by a special Air India flight (AI-187) from Mumbai, after being evacuated from war-torn Lebanon. 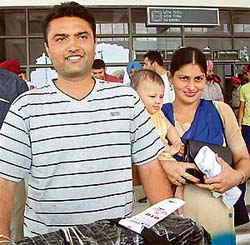 Kanwaljit Singh, a resident of Bathinda, is all smiles as he along with his family, arrive at Rajasansi Airport, Amritsar. — Tribune photo by Rajiv Sharma

Israel and Lebanon under fire

BEIRUT (Reuters) - Israel unleashed more air strikes on Lebanon and Hizbollah fired rockets at Haifa on Sunday as a senior U.N. official demanded a halt to the violence to allow aid to reach desperate civilians.
U.S. Secretary of State Condoleezza Rice, leaving for the Middle East later in the day, has said she will pursue a lasting solution, not an immediate ceasefire. Washington blames Hizbollah and its allies, Syria and Iran, for the conflict. Israeli warplanes bombed targets in Beirut and east and south Lebanon, killing at least three civilians.


Half a dozen blasts echoed across the Lebanese capital as jets roared over the Shi'ite southern suburbs in the early hours. Air strikes also destroyed a Shi'ite religious center in the southern port city of Sidon, wounding four people.
A dozen Israeli air strikes in the eastern Bekaa Valley destroyed three factories, a house and several bridges, killing at least one civilian and wounding seven. Two other civilians died in a raid on a southern village, security sources said.
Two people were killed and 14 wounded when Hizbollah rockets slammed into apartments and vehicles in Haifa, Israel's third largest city, which lies 35 km (20 miles) south of the border.
Jan Egeland, the U.N. emergency relief coordinator, appealed for a halt to the bloodshed. "We are setting up a major relief operation but the violence has to stop and the enormous bombardment that we have seen here with one block after another being leveled has to stop," he said as he toured Beirut's shattered Haret Hreik district
J

tsunami
PANGANDARAN, Indonesia (Reuters) - Indonesian Christians in tsunami-hit areas prayed in church on Sunday as life slowly limped back to normal six days after the disaster that killed nearly 700 people.
In his service, Reverend Rudolf George Sorongan urged people to be strong after Monday's tsunami that displaced thousands of people along a 300-km (185-mile) stretch of the south coast of Java, Indonesia's most populous island. "We have to be resolute in facing this ordeal because God will protect us. We leave it to God for his protection," Sorongan told a gathering in the badly-hit beach town of Pangandaran at the first Sunday service after the disaster.


Indonesia has the world's largest population of Muslims but there is a small community of around 300 Christians in Pangandaran and surrounding areas.
People who came for the service said they were thankful for the relatives who had survived the tsunami, sparked by an undersea earthquake of 7.7 magnitude, that struck without any warning to coastal residents.
Wagirah Ibrahim, a 70-year-old woman, said she lost two grand-children in the tsunami, but was happy she was reunited with her great grand-children in a shelter the next day.
"I was with my two great grand-children, when the water from the beach rose. We ran as fast as we could," Ibrahim said. People have been returning to their homes in an effort to pick up the pieces after the devastating tsunami, the latest in a string of disasters to hit Indonesia. These include the massive December 2004 tsunami, earthquakes, volcanic eruptions and floods
J

A private Virginia firm that already has sent three super-rich men to the International Space Station for $20-million each announced on Friday it would offer an even rarer adventure: A stroll outside the space station for an extra $15-million.

"It is the holy grail of spaceflight; it's something very few of the astronauts and cosmonauts have done," said Eric Anderson, chief executive of Space Adventures.

Added former Nasa spacewalker Kathy Thornton, who is on the firm's advisory board: "It's just sort of the feeling of freedom, that you are your own satellite."

With the blessing of the Russian space agency, Space Adventures is arranging for the first spacewalking tourist to go into orbit in about a year or so, Anderson said.

The trip would involve a launch in a Soyuz capsule, an eight-day stay aboard the space station and a 90-minute spacewalk in a Russian spacesuit. An extra month would be added to the six-month cosmonaut training.

The plan still needs the approval of the other 15 partners in the space station -- including Nasa -- but Anderson said Russian space officials are confident they can get the OK.

Nasa, which has grudgingly accepted Russian-initiated space tourism, would not comment on the proposal.

"They're going to be right outside the door for an hour-and-a-half tethered to the ship," Anderson said. "Of course, they will have a cosmonaut with them."

A spacewalking tourist is "probably unwise," said one former astronaut, who almost died during a February 1997 fire aboard the Russian Mir space station.

"Common sense tells you that you want professionals trained to the Nth degree to do jobs like astronaut jobs," said Jerry Linenger, who was the first American to wear a Russian spacesuit in a spacewalk. "Do you want to get in an airplane with a [professional] pilot and a co-pilot who never flew before?"

Linenger said if a spacewalking tourist does something wrong, that person could endanger the cosmonaut accompanying him. And if the cosmonaut has a problem, the tourist would not be much help, he said.

But others among the more than 150 people who have spacewalked say it offers great thrills.

"I would recommend it to anyone," said Dan Bursch, a former astronaut who lived on the station in 2001 and 2002 and made two spacewalks in the Russian suits.

"Just about anything that could go wrong, the other spacewalker could go help them," Bursch said. "You really have to try hard to screw up."

But you can kill yourself if you do something wrong on a spacewalk, said former astronaut Jay Apt. A spacewalker could become untethered and float away or depressurise the spacesuit and die.
You must log in or register to reply here.
Similar threads
Thailand News
Gilgit-Baltistan News
BRICS News
Russia News
United States News
Share:
Facebook Twitter Pinterest WhatsApp Link
Top