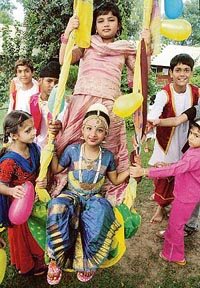 Pageant officials immediately said the lithe 5-foot-9 18-year-old was all right and had fainted. "She's OK. She's fine," pageant representative Lark Anton told Reuters. "She got dizzy. Its very hot up here. Her dress is tight - as you could see it was beaded and heavy. She passed out." Anton said Mendoza "had plenty to eat today," when pressed for the beauty queen's condition before she fainted at the centre of the stage at the Shrine Auditorium, where she had become the 55th Miss Universe before an international television audience
[/FONT]
J 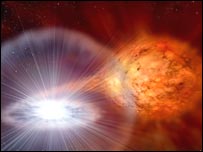 The star is in the equatorial constellation of Ophiuchus

A star on the brink of exploding as a spectacular supernova has been glimpsed by international astronomers.
The star flared up suddenly last February, briefly becoming 1,000 times brighter than normal.
RS Ophiuchi is close to destroying itself in a nuclear explosion called a type 1a supernova, scientists report in the journal Nature.
These are among the brightest phenomena in the Universe, radiating five billion times as much light as the Sun.
They are so bright they can be seen far across the cosmos.
They also seem to be remarkably uniform - they always appear to give off the same amount of light, so that their visibility from Earth, dimmed only by their immense distance, has been used to measure the size of the Universe.
The only problem, which is a great embarrassment to astronomers, is that they have never seen a type 1a close up - their measurements are all based on theory.
They are so rare that the last one known in our galaxy was seen in 1572 by the great Danish astronomer Tycho Brahe, who first coined the term nova, for "new star", not realising he was in fact witnessing the violent end of an unknown star.
Death throes
It has long been believed that type 1a supernovae are the death throes of white dwarf stars. But all modern ones have been so distant that it has not been possible to see what had been there beforehand.

RS Ophiuchi, in the equatorial constellation of Ophiuchus (near Libra), is just the right kind of white dwarf.
Several times in the past century it has flared up, as if in a failed supernova explosion. It is as if a thermonuclear flame has swept across the face of the star without quite catching hold.
The last time it flared up was in 1985, when astronomers' technology was not up to catching all the details.
With space-based telescopes and large arrays of radio dishes, this has all changed. Writing in the journal Nature, a team of astronomers said they managed to detect a plume of gaseous material thrown out by the conflagration.
"The explosion is so energetic it actually lifts an envelope of material off the surface of the star and throws it off into space," lead author Jeno Sokoloski, of Harvard University, US, told the BBC's Science in Action programme.
By tracking the plume, she adds, they could learn more about the star that launched it.
"It started slowing down almost immediately, within just two days, and that tells us the white dwarf must be extremely massive; in fact, almost massive enough to collapse."
Critical mass
Theory says that white dwarfs self destruct when their mass equals 1.4 Suns.
RS Oph is nearing that critical mass. It is slowly gobbling up material from a nearby giant star, gaining a millionth of a solar mass every decade.
At the moment, sitting just below the critical mass, the novae on RS Oph blow themselves out, achieving brief episodes of brilliance.
But soon, RS Oph could pass the tipping point - the nuclear flame will detonate from deep inside the star and blow it apart. How soon is not clear.
"It could be tomorrow, but most likely it'll be 1,000, 10,000, 100,000 years from now," says Jeno Sokoloski.
Whenever it happens, it will be, she says, a spectacular event, outshining the planets, so that its final glory will be visible against the daytime sky. In the meantime, astronomers will be studying the star closely, to watch its every step towards destruction, and hoping to understand the full details of one of the heavens' great mysteries.

Details emerge on private spaceport plans
The State A spacecraft taking off from a private West Texas spaceport being bankrolled and developed by Amazon.com founder Jeff Bezos would take off vertically, but unlike NASA's space shuttle would also land vertically, according to an environmental study that offers a glimpse into the secretive plans. The craft would hit an altitude of about 325,000 feet - or almost 62 miles - before descending and restarting its engine for a "precision vertical powered landing on the landing pad" in sparsely populated Culberson County, about 125 miles east of El Paso. Those were among the plans detailed in a 229-page draft of an environmental review filed with the Federal Aviation Administration. The FAA would issue permits and licenses for Blue Origin to go ahead with launch plans
You must log in or register to reply here.
Similar threads