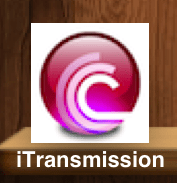 iTransmission is a fully-featured native BitTorrent application for iPad and iPhone, running iPad iOS 3.2 and above, and iPhone iOS 4.0 and above.

More and more BitTorrent users wish they had a chance to download content on the go. Since today, iPhone and iPad owners have such an opportunity with the new BitTorrent client called iTransmission. The application is a native iOS BitTorrent client working on both Apple devices. The system requirements for iPhone are iOS 4.0 and above, those for iPad – iOS 3.2 and above. Although some of the users comment that the earlier versions of iOS also work, the application developers warn that there’s a chance that they suffer severely in performance.

iTransmission currently supports lots of attractive features, including adding task from torrent URL and magnet, and automatic port mapping (UPnP) for users behind routers. Besides, the client offers pretty UI and Transmission’s web interface, as well as the ability to set both connection and speed limits. Users will also be able to choose which network interface to use – Wi-Fi or cellular network.

Comparing the client with similar application, the best feature is considered to be the ability to choose which network the user wants to use at the moment for content downloading. This is particularly useful when considering that most wireless carriers already have, or are currently in the process of implementing, the bandwidth allotments with overage fees.

Many users have already appreciated iTransmission: it appeared to be very handy for people waiting in an airport and willing to have something to watch during the long flight on their iPads. For iPhone owners it is useful for grabbing music to listen in the traffic jams or wherever.
You must log in or register to reply here.
Similar threads