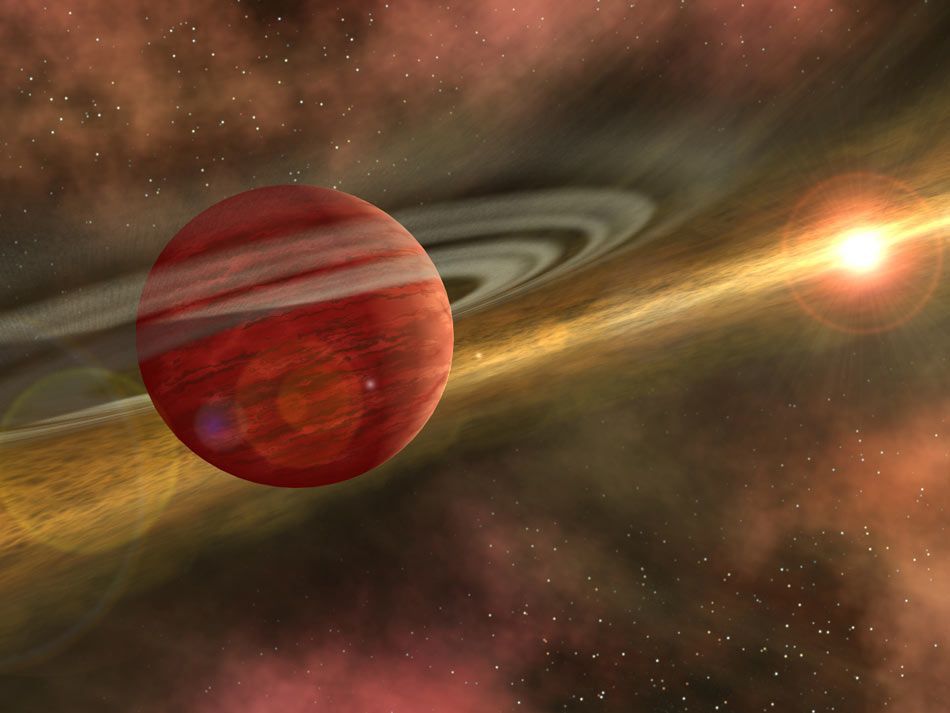 NASA/JPL-Caltech/R. Hurt (SSC-Caltech)
Out of the Dust, a Planet is Born
In this artist's conception, a possible newfound planet spins through a clearing, detected around the star CoKu Tau 4 by the Spitzer Space Telescope, in a nearby star's dusty, planet-forming disc. The possible planet is theorized to be at least as massive as Jupiter, and may have a similar appearance to what the giant planets in our own solar system looked like billions of years ago.

NASA/ESA/G. Bacon (STScI)
Hubble Spots Possible New Moons Around Pluto
The artist's concept above shows the Pluto system from the surface of one of the candidate moons. The other members of the Pluto system are just above the moon's surface. Pluto is the large disk at center, right. Charon, the system's only confirmed moon, is the smaller disk to the right of Pluto. The other candidate moon is the bright dot on Pluto's far left. Click image for full resolution. 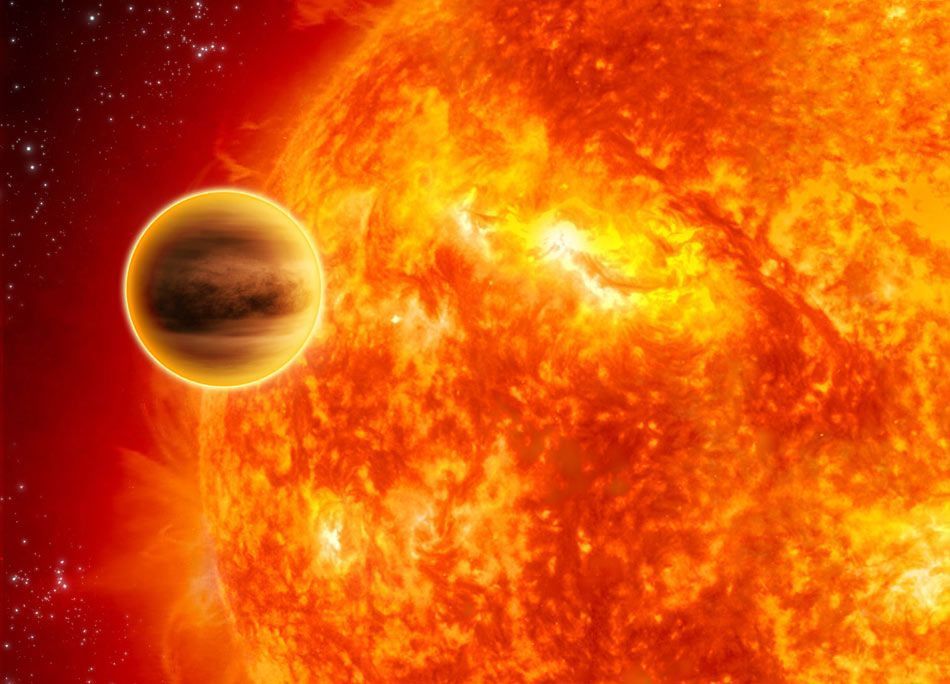 ESA/C.Carreau
Steaming Hot Planet
This artist's impression shows a gas-giant exoplanet transiting across the face of its star. Infrared analysis by NASA's Spitzer Space Telescope of this type of system provided the breakthrough.The planet, HD 189733b, lies 63 light-years away in the constellation Vulpecula. It was discovered in 2005 as it transited its parent star, dimming the star's light by some three percent. 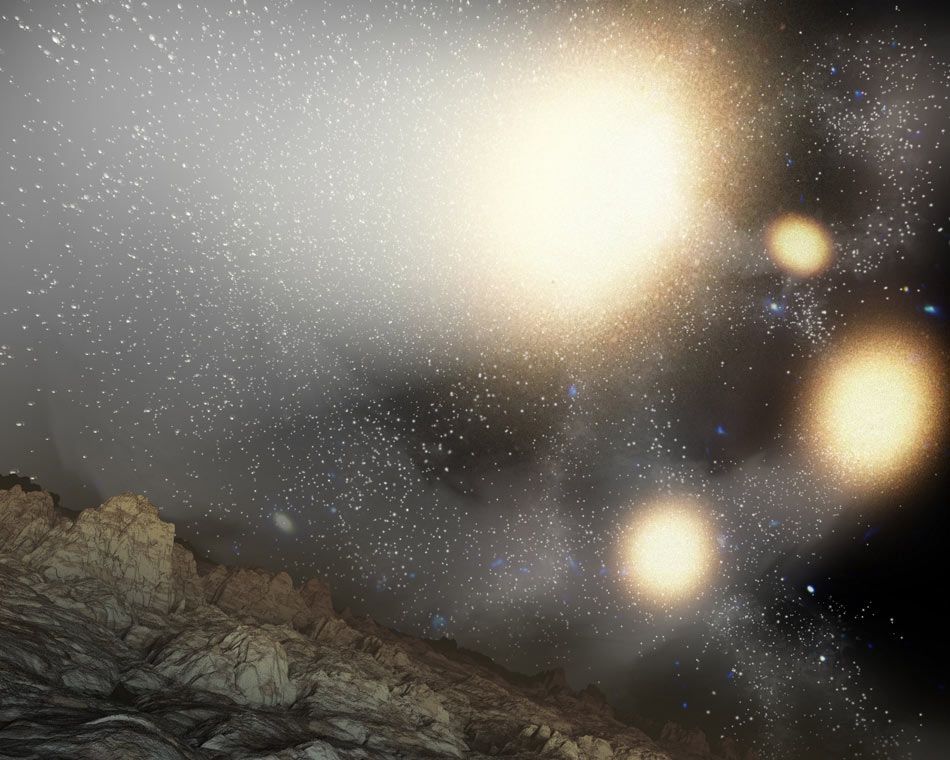 NASA/JPL-Caltech/Harvard-Smithsonian CfA
Fantastic Four Galaxies with Planet
This artist's concept shows what the night sky might look like from a hypothetical planet around a star tossed out of an ongoing four-way collision between big galaxies (yellow blobs). NASA's Spitzer Space Telescope spotted this "quadruple merger" of galaxies within a larger cluster of galaxies located nearly 5 billion light-years away.Though the galaxies appear intact, gravitational disturbances have caused them to stretch and twist, flinging billions of stars into space, nearly three times as many stars as are in our Milky Way galaxy. The tossed stars are visible in the large plume emanating from the central, largest galaxy. If any of these stars have planets, their night skies would be filled with the monstrous merger, along with other galaxies in the cluster (smaller, bluish blobs).This cosmic smash-up is the largest known merger between galaxies of a similar size. While three of the galaxies are about the size of our Milky Way galaxy, the fourth (center of image) is three times as big. All four of the galaxies, as well as most other galaxies in the huge cluster, are blob-shaped ellipticals instead of spirals like the Milky Way.Ultimately, in about one hundred million years or so, the four galaxies will unite into one. About half of the stars kicked out during the merger will fall back and join the new galaxy, making it one of the biggest galaxies in the universe. 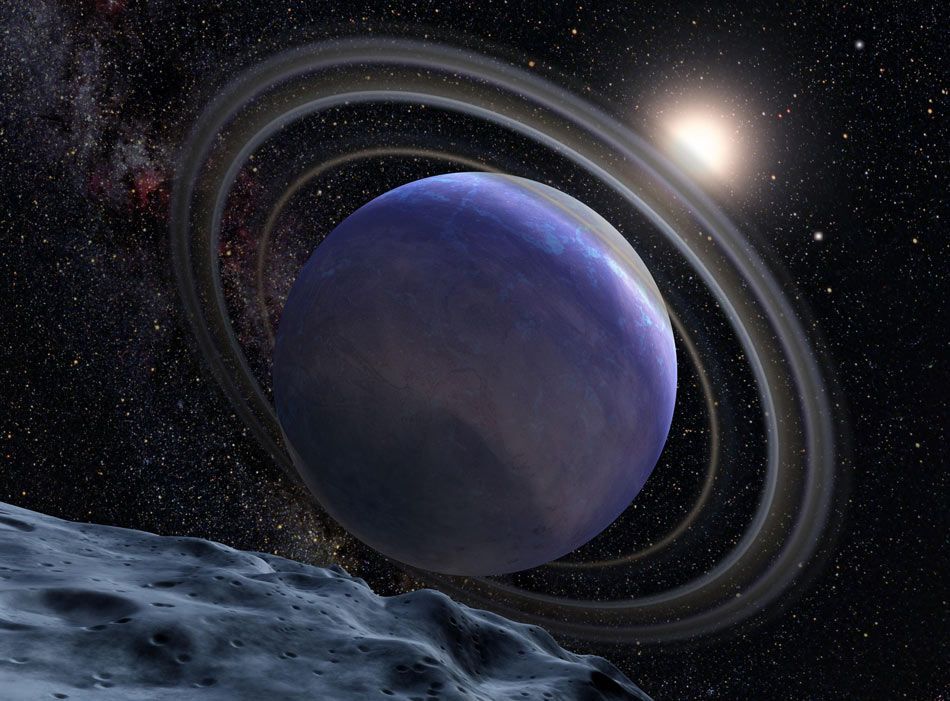 NASA/ESA/G.Bacon(STScI)
Exoplanet HR 8799b
This is an artistic illustration of the giant planet HR 8799b.The planet was first discovered in 2007 at the Gemini North observatory. It was identified in the NICMOS archival data in a follow-up search of NICMOS archival data to see if Hubble had also serendipitously imaged it.The planet is young and hot, at a temperature of 1500 degrees Fahrenheit. It is slightly larger than Jupiter and may be at least seven times more massive. Analysis of the NICMOS data suggests the planet has water vapor in its atmosphere and is only partially cloud covered. It is not known if the planet has rings or moons, but circumplanetary debris is common among the outer planets of our solar system. 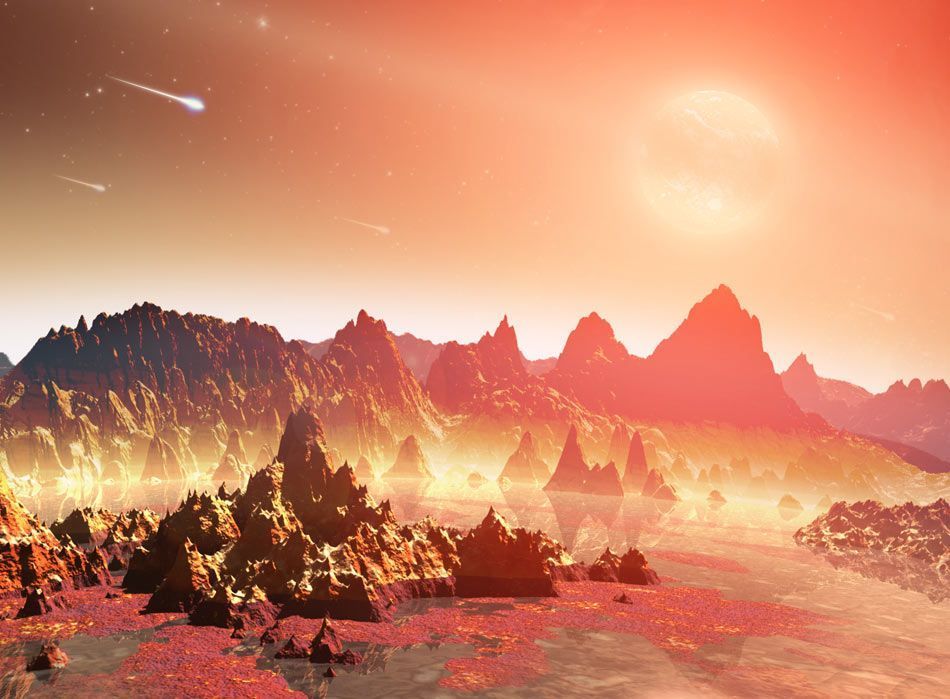 NASA/JPL
Chemical Soups Around Cool Stars
This artist's conception shows a young, hypothetical planet around a cool star. A soupy mix of potentially life-forming chemicals can be seen pooling around the base of the jagged rocks. Observations from NASA's Spitzer Space Telescope hint that planets around cool stars - the so-called M-dwarfs and brown dwarfs that are widespread throughout our galaxy - might possess a different mix of life-forming, or prebiotic, chemicals than our young Earth. 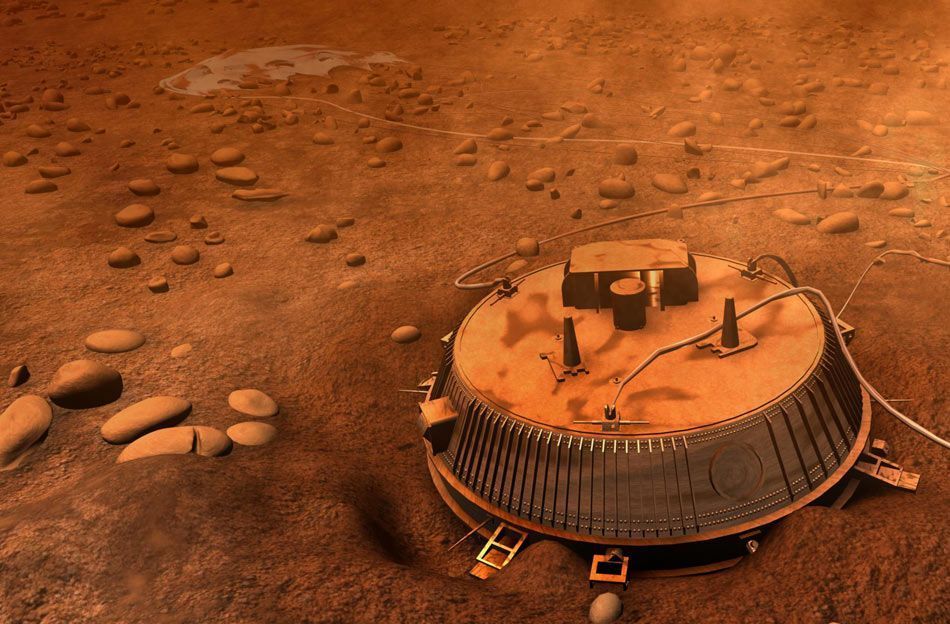 ESA
Huygens on Titan
In 2005 the robotic Huygens probe landed on Titan, Saturn's enigmatic moon, and sent back the first ever images from beneath Titan's thick cloud layers. This artist's impression is based on those images. In the foreground, sits the car-sized lander that sent back images for more than 90 minutes before running out of battery power. The parachute that slowed Huygen's re-entry is seen in the background, still attached to the lander. Smooth stones, possibly containing water-ice, are strewn about the landscape. Analyses of Huygen's images and data show that Titan's surface today has intriguing similarities to the surface of the early Earth. 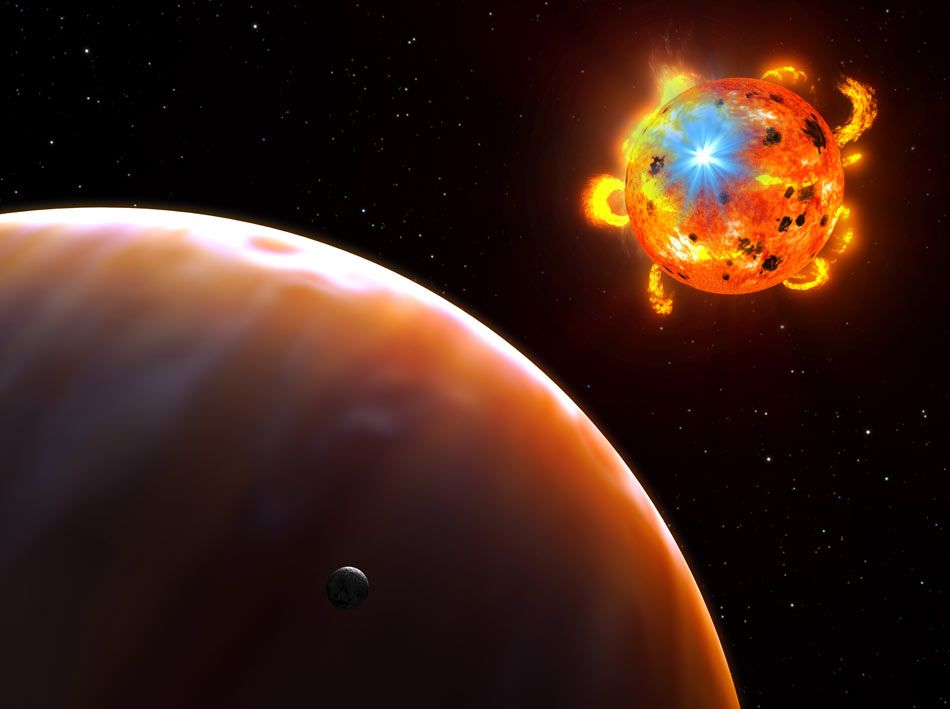 NASA/ESA/G. Bacon(STScI)
Flaring Red Dwarf Star
This is an artist's concept of a red dwarf star undergoing a powerful eruption, called a stellar flare. A hypothetical planet is in the foreground. Flares are sudden eruptions of heated plasma that occur when the field lines of powerful magnetic fields in a star's atmosphere "reconnect," snapping like a rubber band and releasing vast amounts of energy equivalent to the power of 100 million atomic bombs exploding simultaneously.Studying the light from 215,000 older red dwarfs collected in observations by NASA's Hubble Space Telescope, astronomers found 100 stellar flares popping off over the course of a week. 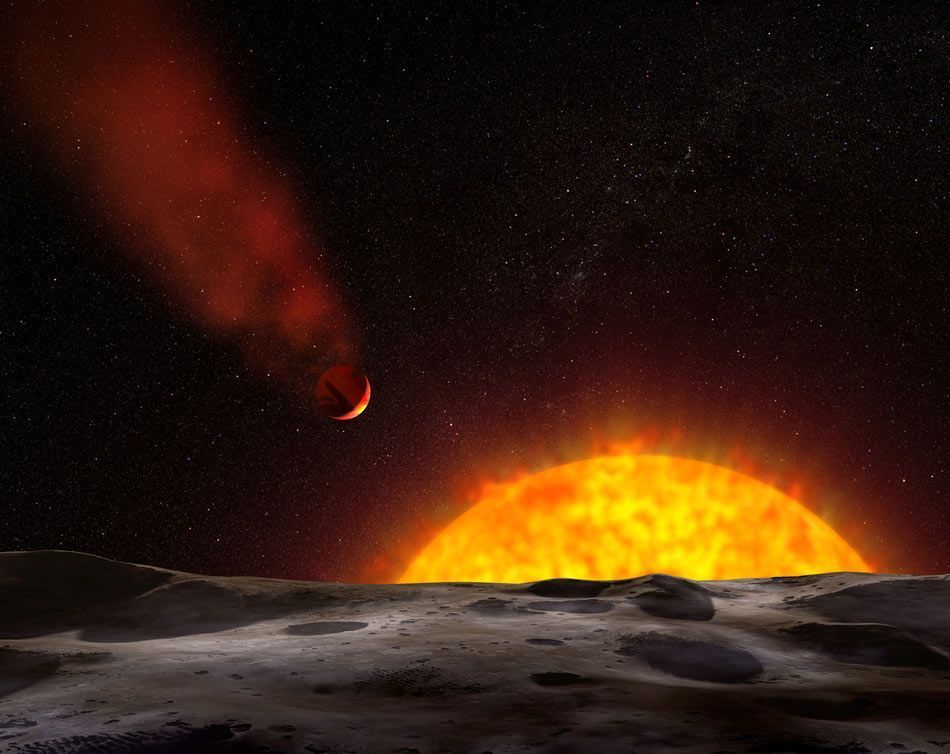 NASA/ESA/G. Bacon (STScI)
Super-Hot Planet with Unique Comet-Like Tail
Astronomers using NASA's Hubble Space Telescope have confirmed the existence of a baked object that could be called a "cometary planet." The gas giant planet, named HD 209458b, is orbiting so close to its star that its heated atmosphere is escaping into space.Observations taken with Hubble's Cosmic Origins Spectrograph (COS) suggest powerful stellar winds are sweeping the cast-off atmospheric material behind the scorched planet and shaping it into a comet-like tail. 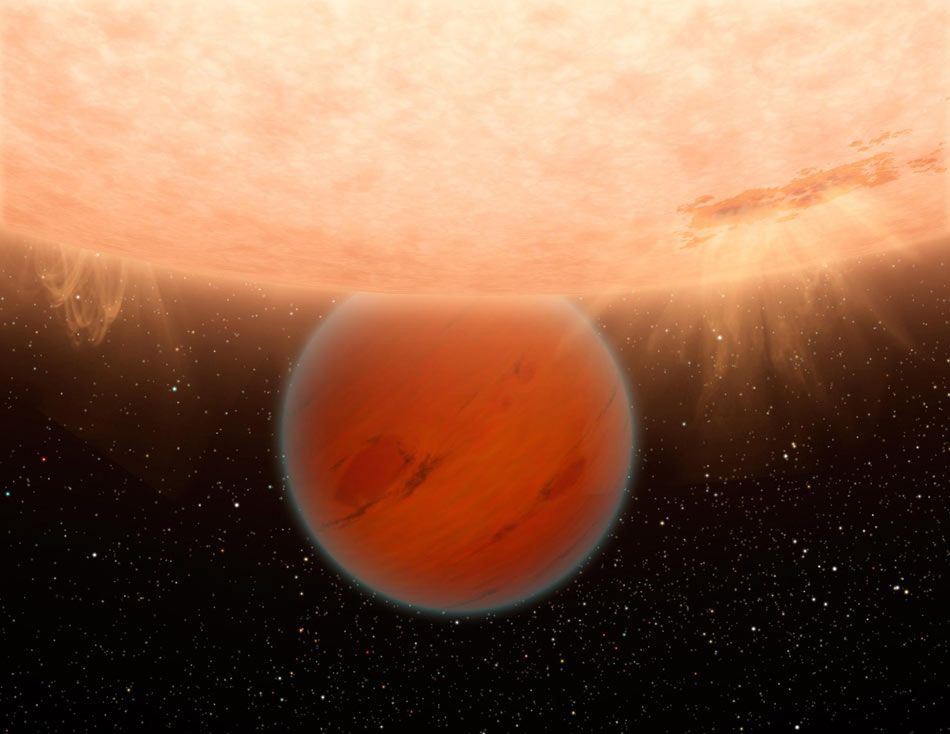 NASA/JPL-Caltech
This Planet Smells Funny
Giant planet GJ 436b in the constellation Leo is missing something--and that something is swamp gas. To the surprise of astronomers who have been studying the Neptune-sized planet using NASA's Spitzer Space Telescope, GJ 436b has very little methane--an ingredient common to many planets in our own solar system. This artist's concept shows the unusual, methane-free world partially eclipsed by its star.Models of planetary atmospheres indicate that any world with the common mix of hydrogen, carbon and oxygen, and a temperature up to 1,000 Kelvin (1,340 degrees Fahrenheit) should have a large amount of methane and a small amount of carbon monoxide. But at about 800 Kelvin (or 980 degrees Fahrenheit), GJ 436b it does not. The finding demonstrates the diversity of exoplanets and the need for further study. 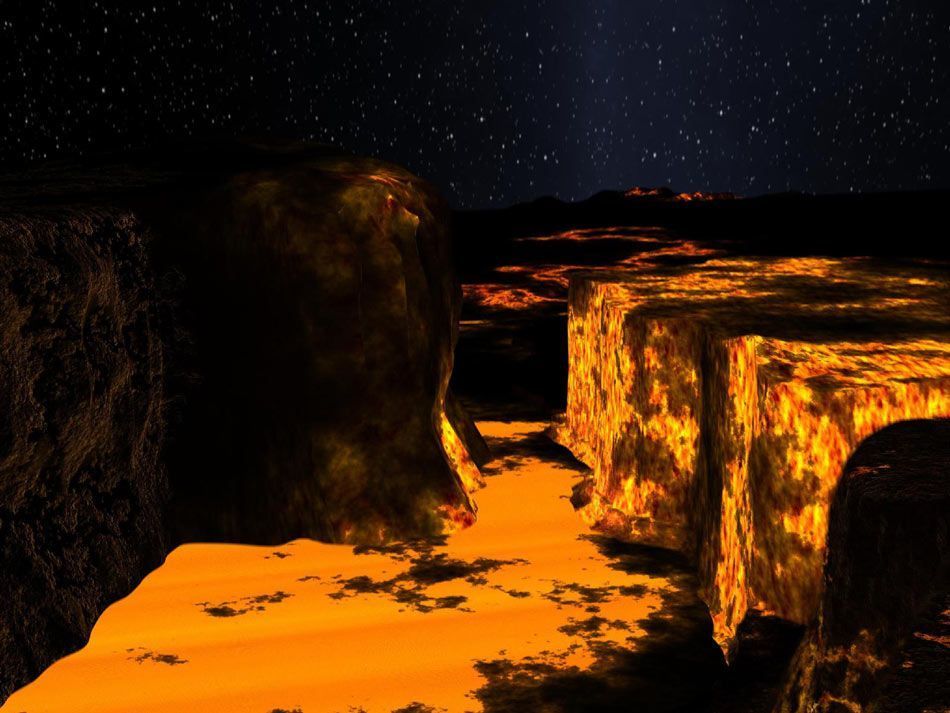 NASA/Kepler Mission/Dana Berry
An Imagined Canyon on Planet Kepler 10-B
The daytime temperature is expected to be more than 2,500 degrees Fahrenheit, hotter than lava flows here on Earth, hot enough to melt iron! Many years ago, before Kepler launched, members of what became the Kepler team built a robotic telescope at Lick Observatory to learn to do transit photometry-- detecting drops in brightness of stars when planets pass in front of them. We called it the Vulcan Telescope, named after the hypothetical planet that scientists in the 1800's thought might exist between the Sun and Mercury. A planet that might explain the small deviations in Mercury's orbit that were later explained with Einsteins theory of general relativity.Vulcan is the god of fire in Roman mythology, a name befitting of a world so close to the Sun. The artists rendering of Kepler-10b is reminiscent of that hypothetical planet Vulcan. The Kepler team came full circle in its quest. We know that we've only begun to imagine the possibilities. 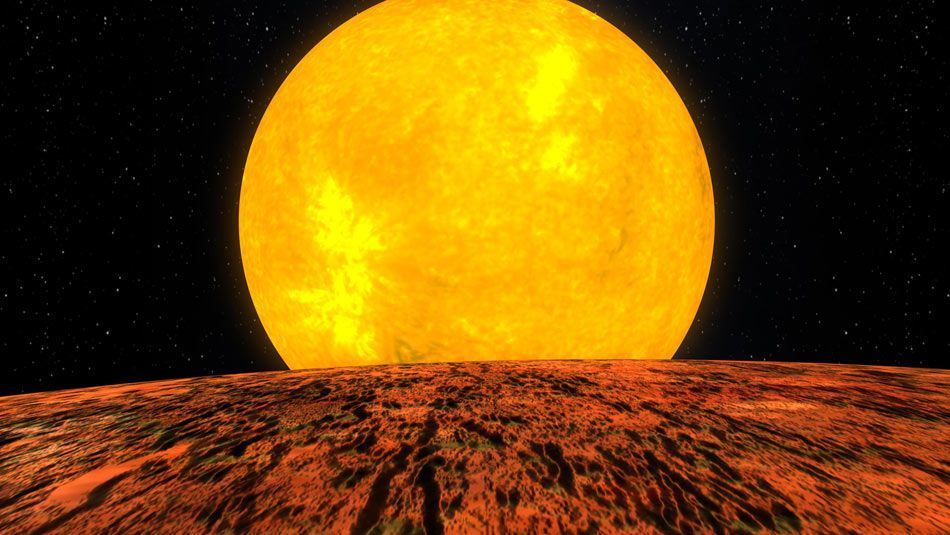 NASA/Kepler Mission/Dana Berry
Imagined View from Planet Kepler 10-B
Kepler-10b orbits one of the 150,000 stars that the Kepler spacecraft is monitoring, a star that is very similar to our own Sun in temperature, mass and size, but older with an age of over 8 billion years, compared to the 4-and-1/2 billion years of our own Sun. It is one of the brighter stars that Kepler is monitoring and about 560 light years from our solar system, which means when the light from this star began its journey toward Earth, European navigators were crossing the Atlantic Ocean for the first time in search of new horizons. Today, we are still exploring and our crow's nest is a space telescope called Kepler. One day, the oceans we cross will be the galaxy itself, but for now, we imagine the worlds we discover by putting all that we have learned from our observations and analyses into the fingers of artists.Kepler-10b must be a scorched world, orbiting at a distance that is more than 20 times closer to its star than Mercury is to our own Sun, with a daytime temperature expected to be more than 2,500 degrees Fahrenheit.The Kepler team has determined that Kepler-10b is a rocky planet, with a surface you could stand on, a mass 4.6 times that of Earth, anda diameter 1.4 times that of Earth

Staff member
tfs...
You must log in or register to reply here.
Similar threads