Narendra Modi is implementing the Doval doctrine in Kashmir 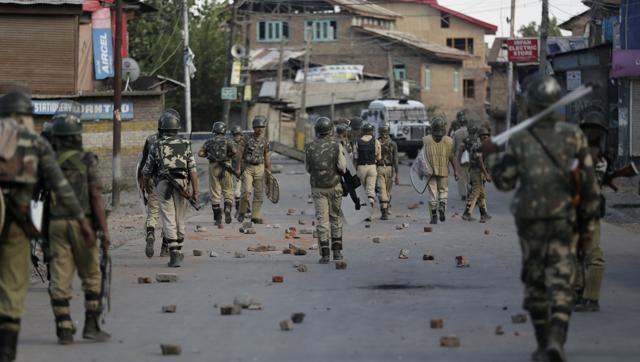 The Modi government’s hardline strategy in Kashmir is a straight lift from the approach suggested by National Security Adviser Ajit Doval in 2010. Speaking about protests that year he told policymakers not to overreact and give in. He said the crisis will pass off, “It looks big in the midst of it, they cannot sustain it beyond a point and even if they do there is a price they have to pay.” As an assimilationist strategy it has certain astute aspects but it will eventually harm India and damage Kashmir irreparably.
Kashmir is bracing itself for another crackdown. The Narendra Modi government has made it clear that it wants to take back control of the streets from stone-pelting youth. A security official told the Business Standard “Sooner or later, we will have to retake control in South Kashmir. The longer we wait, the more emboldened the protesters become, the more force will be required to deal with them”.
What is bewildering analysts is the persistence of Delhi’s hardline strategy. More than 80 civilians have been shot dead, many blinded and over 10,000 reportedly injured. There is no attempt to scale back the response of security forces. Indian governments have brutally put down unrest before such as in 2010 when 120 youth were killed – but this time Delhi’s reaction seems to be crafted for larger purposes.

To establish that this flows from a well-thought strategy one needs to see a candid 2010 lecture on Kashmir by India’s National Security Adviser Ajit Doval and discern the continuity between the approach he commended then and Delhi’s policy now. The lecture, available on YouTube, offers a fascinating insight into how Doval and the Modi government view the Kashmir question.
Troubling mindsets
Speaking at an NGO event in Hyderabad when he was not in government, Doval characterised the Kashmir problem as the product of the “dysfunctional mindset” of three parties: India, Pakistan and the Kashmiri separatists.
India’s mistake, according to Doval, was to follow a policy of appeasement since 1947. Instead of making Pakistani troops vacate Jammu and Kashmir, India went to the United Nations; Kashmir was internationalised and Article 370 was a product of such appeasement. “Once you accepted …they were different, you sowed the seeds of separatism”.
Doval argues that India has trouble in exercising power, in setting the agenda and changing realities in its favour. Pakistan, instead, decided the timing and terms of engaging India in war or peace, India restricted itself to defensive defence, not defensive offence.
Pakistan’s (and Kashmiri) mindset, he reckons, is that “India is weak, it is a nation of brahmins and banias…they are no fighters, [on the contrary] “we are great fighters, we have a great religion …that teaches us self-sacrifice…jihad and therefore India can be balkanised by them”. The Kashmiri separatists assume that international opinion is in their favour and they have great faith in Pakistan even though it does not have the capacity nor the intent to liberate Kashmir.
His doctrine is thus essentially predicated on three assumptions: India is traditionally reluctant to embrace power, Pakistan is driven by a desire to destroy India and Kashmiris are complicit in the latter’s project.

Doval argues that the situation will change and that Kashmir will have a solution if one of the three players changes their mindset. Delhi should give up on the high moral ground as an antidote to Pakistan’s misadventures and embrace the exercise of power. “In the game of power the ultimate justice lies with the one who is strong”.
This framework leads Doval to understand the 2010 protests through a particular lens that has a read across to the policies pursued by the government now. The protests, he argues, were not a spontaneous uprising by civil society but were part of a well-orchestrated plan by the ISI in league with Kashmiri separatists. Pakistan instructed people where they should congregate, where to collect stones. There would be calls from mosques as well. He said the protests were not peaceful, the type of damage stones can do was “totally murderous” and therefore the security forces “were totally justified in using the force they did”. He said those resorting to indiscriminate force against innocents must be punished but stressed that it is a blunder to undermine the rule of law.
Doval then made policy recommendations about the 2010 protests that chime with Delhi’s handling of the current situation.
His advice to policymakers then was: “Don’t overreact, don’t give in, don’t follow appeasement, it [the crisis] will pass off. It looks big in the midst of it, they cannot sustain it beyond a point and even if they do there is a price that they have to pay.” The policy should send a message to Pakistan that “paying some youth” to wage an “armed violent uprising” will not change government policy. “It won’t”.
Doval believes that if India exercises power, then Pakistan and the Kashmiris will fall in line. Islamabad must be made to understand that it cannot take on the Indian establishment. Islamabad’s mindset “is unlikely to change unless India gives a decisive blow to Pakistan”. This would also make the separatists change their minds and renounce links with Pakistan.

Apart from the use of force to quell protests Doval also endorses a hardline political approach with a view to conceptually reconfigure the conflict. India must reiterate unequivocally that J&K is an integral part of India. Delhi must insist that there is no political question to be settled in Kashmir (a point BJP general secretary Ram Madhav also made recently). “Do not say we will talk to the Kashmiri people for a political solution”.
Disaggregate the problem. Different people take to the streets for different reasons. Youth are unhappy about lack of jobs, others about lack of development etc. Address those discretely; do not allow them to converge on one point and turn the discussion to political settlement. Flip the understanding of autonomy to empower the people through development but not by empowering those in power like mainstream parties.
Assimilation without legislation
We can draw the following conclusions from the above:
One, the Doval doctrine is essentially an aggressive assimilationist strategy to end the discussion on Kashmir’s political status. We are seeing that strategy implemented in parts. Rajnath Singh constantly reiterates that J&K is an ‘integral part of India’ and that violence will not be tolerated.
Modi’s decision to call off foreign secretary talks in September 2014 in reaction to a meeting of separatists with the Pakistani High Commissioner appears as an element of this strategy geared to get Kashmir off the bilateral agenda.
The ongoing crackdown is designed to convince Kashmiris that they will need to reconcile to assimilation, even if it involves the use of force. In the lecture Doval advises governments not to underestimate “your own security agencies”. “They can do if they are tasked and if there is a political will to ask them to do a thing”. Modi appears to have endorsed this policy as he has barely spoken out about the scale of casualties in Kashmir except in vague generalities – a marked contrast to his immediate, fervent appeal about protests and violence in Karnataka over the Cauvery waters dispute.
Two, the timing of the crackdown is also strategically astute. It happens as the Barack Obama presidency winds down, when his administration is more keen on tying up security arrangements with regional powers like India (to balance China) than worry about human rights violations in Kashmir.
Three, the approach is currently confounding Pakistan. Islamabad is criticising India’s policy but Washington and the international community are impervious to Kashmir-oriented lobbying because of Islamabad’s duplicitous dealings on Afghanistan and because India is important to American security calculations in Asia. Meanwhile, the Pakistan army cannot – as in the past -- allow militant violence to ramp up dramatically in Kashmir or elsewhere in India for fear of aggravating casualties in the Valley. It also realises that a military confrontation suits the BJP as the latter is looking for nationalist causes to consolidate domestic support.

The downsides
Notwithstanding these, the Doval doctrine is deeply flawed.
For one, it is entirely abstracted from the nature of lived experience in the Valley shaped by unfulfilled political aspirations, an overwhelming military presence, denial of rights of assembly, and repeated excesses over the years. Pakistan’s machinations and religious radicalism are factors in the Valley but they thrive in the seedbed of opportunity established by India’s policy. Incidentally, hard evidence that Pakistan and the separatists are organising every street protest in Kashmir is yet to be furnished by the Modi government. If stones are organised and mosques give calls to pelt them there surely must be video evidence that nationalist television anchors can purvey endlessly – but we are yet to see any.
Two, when translated into policy, the Doval doctrine does not differentiate between separatist leaders allegedly stoking unrest and civilians on the streets – it directs the fury of the State on the latter, thus handing out a form of collective punishment. If the people on the streets assemble for a range of developmental grievances, apart from separatism, as Doval contends, then why are they being shot dead as if they are all saboteurs? If the State has concluded that civilians on the streets are separatists, does it plan to use force on all of them to socialise rural Kashmir into a new understanding of the conflict?
Doval’s theory assumes that a period of shock therapy will rewire the way Kashmiris think about their situation and accordingly adjust their expectations. But it underestimates what collective suffering does to social resolve; a sense of injustice reinforces the search for meaning, it will not steer individuals towards depoliticised acquiescence. Theoretically neat statist strategies that delineate outcomes on paper have rarely eviscerated morally grounded longings in history. Kashmiris can be repressed, but State violence will not tame their soul.
Delhi’s shock therapy has already caused untold damage to Kashmir. If persisted with, it can generate severe militant blowback within the Valley. Come to think of it, India’s main objective in Afghanistan is to ensure that it does not become a safe haven for anti-Indian terrorists. By pursuing egregious violence in the Valley, India will have aided the creation of one in Kashmir within its borders – and thereby achieved Pakistan’s purposes. Who then is walking into whose trap?
An unstable, repressed Kashmir will have a toxic effect on India’s polity, polarising society and poisoning its public sphere -- in ways that suppression of Palestinians has changed Israeli society and lurched the country to the Right. The Doval doctrine is, in short, a violent experiment that will destabilise India. Its use and application must stop now.
You must log in or register to reply here.
Share:
Facebook Twitter Pinterest WhatsApp Share Link
Top