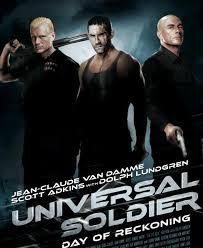 Story: Former Universal Soldier Luc Deveraux (Van Damme) surfaces in the memories of John (Adkins), a man he leaves in a coma after killing John's wife and daughter for no apparent reason.

Movie Review: When John wakes up from a coma and starts recovering from the trauma of seeing his wife and daughter shot dead, he tries to piece back his life before his family was murdered. Several threads emerge. There's Magnus, a rampaging handyman (Arlovski), an apparently un-killable Andrew Scott (Lundgren, regenerated as Luc's right-hand man) and a pole-dancer in the fray. They take the story in different directions before John actually finds out more about himself as he makes his way to Luc.

Hyams shows an assured hand as he directs Van Damme and Lundgren in his second film as a director in this resurrected franchise (the film before this was Universal Soldier: Regeneration). The franchise involves a constant struggle between UniSols (Universal Soldiers, regenerated after being killed in active duty and turned into killing machines) and the government that created them.

Van Damme turns baddie for the first time in the franchise. His character Luc Deveraux stays the same, but a lot has changed since you last saw him in Regeneration. A terrifying bald 'villain' now, he exudes pure menace. Adkins, a British martial artist, lumbers through this role with required wooden-ness. Arlovski, a former UFC (Ultimate Fighting Championship) champion shows through his determined, wordless performance why he's called 'The Pitbull'. It's a pity he didn't get more chances to show off his mixed martial arts skills. Lundgren plays a stock role, a re-run of an act he's quite familiar with.

With at least some scenes that make you cringe over sheer brutality, this film is meant only for those Van Damme fans (and the Unisol franchise) who prefer violent shoot-'em-ups and hand-to-hand combat scenes over stunts and high-octane car chases. One wishes this film had more bite and less bark and growl.
You must log in or register to reply here.
Similar threads