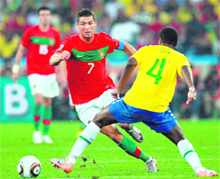 Portugal and Brazil played out an unsavoury goalless draw, including a flurry of first-half yellow cards, as both sides reached the World Cup second round on Friday after completing their Group G games unbeaten.

Brazil finished top of the section with Portugal second. The match, one of the most eagerly-awaited of the first round, was a huge disappointment with neither team prepared to take risks and was marred by petulant behaviour on both sides. Brazil, already qualified, surprisingly left Robinho out of their starting lineup, replacing him with Nilmar, while Julio Baptista stood in for the suspended Kaka in midfield.

Seven players were booked in a bad-tempered first half including Brazil midfielder Felipe Melo, hauled off just before halftime by coach Dunga and replaced by Josue as his duel with Pepe - also yellow carded - threatened to boil over.

There were only three efforts on target before the break as both teams cancelled each other out.

The best first-half chances fell to Nilmar, who had his close-range effort tipped onto the post by Eduardo after a cross by Maicon and then saw a downward header from another Maicon cross bounce just wide of the goal.

Tempers calmed down after the break with Portugal looking the sharper and substitute Simao Sabrosa forced Brazil goalkeeper Julio Cesar to make a tricky save from a long-range effort at the second attempt.

Portugal should have gone ahead soon after when Cristiano Ronaldo’s run ended with the ball falling to Raul Meireles but his close-range effort was saved by Cesar who dived bravely to turn the ball around the post and was hurt in the process.

Brazil were without suspended playmaker Kaka and forward Robinho, who was rested as the five-times world champions were already sure of their place in the last 16.

Portugal 0 Brazil 0
You must log in or register to reply here.
Similar threads