Folding Bluetooth keyboards can help restore speedy text input to your mobile device on the go, but be prepared for mushy keys and other compromises.

The MyType keyboard in green.

While software keyboards continue to improve and speech recognition becomes a more viable option where it does not create social stigma, text input remains a key challenge for mobile devices. Larger tablets -- generally 8 inches and larger -- can accommodate a keyboard tucked away in a folio carrying case or attached as a cover or, as seems the trend with Windows tablets, embedded into a case.

For smaller tablets or smartphones, though, carrying a touch-typable keyboard around can mean yet another bulky thing to pack. The challenge even predates the rise of smartphones. In the heyday of PDAs like the Palm V, a company called ThinkOutside created the Stowaway keyboard. Some of its last iterations supported Bluetooth and can be be used with today's smartphones. Still, after a long void, other choices have finally entered the market.

A bit over $20 will net you a generic cheap plastic folding keyboard with a rechargeable battery. The typing experience isn't horrible even if the keys do wobble around a bit, but there are some layout sins, including a right Shift key located below the letters and a reduced-width H key on the left side of the fold. The one I'm thinking of is among the smaller models, but it features a lot of wasted space around the keys.

The Freedom I-Connex 2, meanwhile, is among the largest mobile folding keyboards and features large letter keys. It also can be powered by two AAA batteries that are inserted to the left of a row of small media buttons; the iOS home button also can be activated from the keyboard. While the keys provide a satisfying landing surface for your fingers, the key response is still somewhat mushy, and for some reason it's particularly easy to activate the Caps Lock key accidentally.

At about $35, the Perixx Periboard 805-L keyboard is a huge step up from less expensive models. 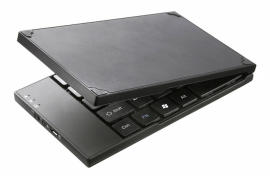 You won't find any keys specific to Android or iOS, but you will find a mostly standard keyboard layout with crisp key response in a solid, elegant design that closes magnetically; however, do watch out for the sharp corners. The Periboard is quite a bit thinner than other models and even includes a Caps Lock status light, something that would help avoid many typos that can occur when using the I-Connex 2.

A recent Kickstarter graduate, the MyType keyboard may be the thinnest folding keyboard on the market. It achieves its slim profile by cleverly spacing its keys so that they interlock when folded. The MyType is made from a flexible material like many roll-up keyboards and can easily be stuffed into a back pocket without concern for it cracking as with other models. Unfortunately, while the mismatched key rows may not throw you off terribly, the mushy keys will, at least for a while. They may compare favorably to those on other flexible keyboards, but they just can't compete with those on more rigid keyboards.

At least one more folding keyboard may yet be waiting in the wings. The Jorno keyboard first tempted mobile device users at CES 2011, then was cancelled, and then later still was revived via Kickstarter. However, since inching past its funding goal, it has slipped well past its its initial estimated April 2013 ship date and undergone a redesign. The latest update notes that the company is still working out design issues and now doesn't expect to ship until March 2014. Maybe.

While it may have you stabbing at the screen more with its dearth of keys specific to iOS and Android, the Perixx Periboard 805-L has the best combination of typing experience and design. If you know you'll need to enter some text on nothing but, say, your smartphone, it can be a great companion device to throw into your other pocket for a typing experience that competes with the best available for tablets.​
You must log in or register to reply here.
Similar threads