Staff member
Micromax today announced several handsets including the Micromax Canvas 6 and the Canvas 6 pro. These two handset are priced at ₹13,999. The other handsets namely Micromax Bolt Supreme / 2 / Q381, Canvas Spark 2+ /Evok /Mega 2/ Unite 4 will be made available soon.


For now the Canvas 6 and the Canvas 6 pro will hit the stores, the pro in fact can be pre-booked from Micromax official website. Both smartphones are powered by Helio X10 octa core processor.
Micromax Canvas 6 features and specifications

This handset comes with dual SIM slot. It sports a 5.5 inch screen with full HD resolution. As mentioned Canvas 6 is powered by MediaTek Helio X10 octa core processor coupled with PowerVR G6200 GPU.
Around UI (over Android Lollipop version 5.1) runs the show with 3GB RAM and 32GB ROM + micro SD card support. A 13MP auto focus camera is packed on the back with LED flash and 8MP camera on the front. Key features are 4G LTE, 3G, 2G, GPS, Bluetooth 4.1, WiFi and finger print sensor. Micromax Canvas 6 gets power from a 3000 mAh battery. 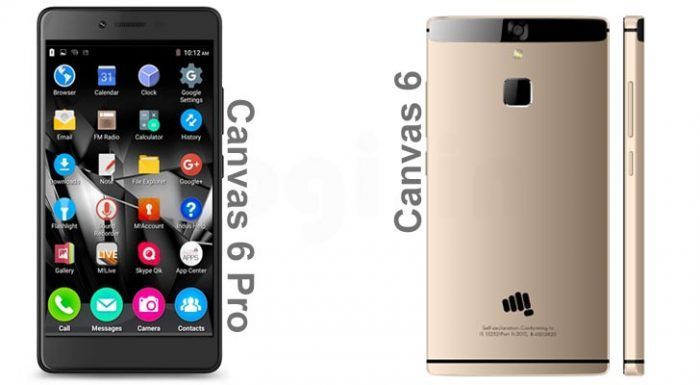 This handset can be pre-booked from Micromax website. It is also dual SIM powered by 2GHz Helio X10 octa core processor with PowerVR G6200 GPU. Around UI runs out of the box with 4GB RAM, 16GB ROM and micro SD card support.
Screen is 5.5 inches supporting full HD resolution and comes protect with gorilla glass 3. Like many other octa cores this one too comes with 13MP primary camera and 5MP secondary camera.
Key features are 4G LTE, 3G, 2G, GPS, WiFi and Bluetooth. Micromax Canvas 6 Pro gets power from a 3000 mAh battery.
Micromax Canvas 6 and 6 pro are priced at ₹13,999.

Mediatek doesn't shares its source code with community/developers except OEM's/Partners which corresponds to hefty payout & is under the pretext of strict NDA.
So at present, there is no official Cyanogen/CyanogenMod support available for Mediatek SoC based devices.

Staff member
So there are no custom roms for mediatek s ?
U


Dhillon said:
So there are no custom roms for mediatek s ?
Click to expand...

very few but all of them are buggy as hell & CyanogenMod is not supporting either. They are based on CM but are mere ports by third party amateur developers.
If you don't have the access to kernel then you can not create custom Roms which helps to leverage the true potential of the SoC.

As far as Micromax is concerned, all I can say is, stay away from their offerings unless you dont have any option which now is not the case with the direct entry from Chinese counterparts. They were selling Chinese rebranded products and this strategy clearly backfired due to lack of in house R&D & future insight.
Samsung with its J series lineup has retained the no. 1 spot in sub 7K-15K segment which is approx 55% of the market share.
With the advent of Android N, Google is hitting the bulls eye with features/customization which were once used to be the glore of CM but not anymore.
On the otherhand, CM was always used to be buggy. Yu Yureka, Yuphoria are the examples from Indian approach as not many were inclined towards the beasty OnePlus One. Customers swear by the third class support that was provided to them by YU & Cyanogen itself.
Cyanogen is now becoming more like a bloatware ROM which started incorporating bloats like Truecaller -The biggest privacy invasion mankind has ever seen, MS Apps (after taking stake in the company) etc. etc.

So, my advice & recommendation is to buy a device which is in constant development and offers latest patches/OS upgrades whenever they are released. Thats why I always recommend Nexus devices if someone can not afford the high priced flagships & is on a tight shoe lace string budget then Android One based Handheld devices are way to go.....