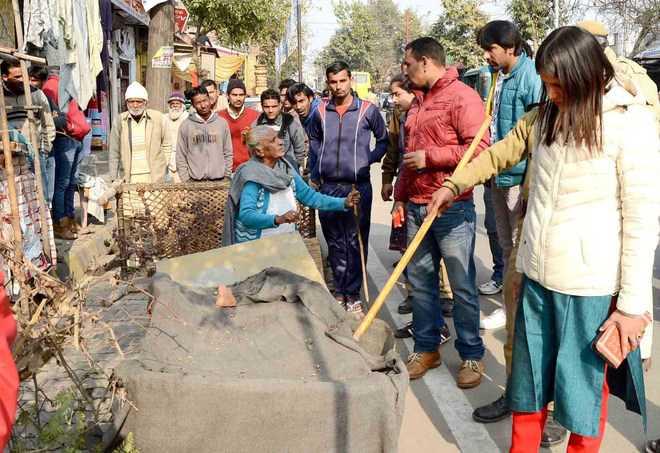 Mukhya Nagar Adhikari Vipra Trivedi today warned encroachers occupying the Municipal Corporation land. Trivedi has been impromptu inspecting and holding anti-encroachment drives and penalising offenders.
“We had earlier warned traders and now removing encroachments. If anyone encroaches upon the MC land again, a fine of Rs 500 to Rs 1,000 will be charged and legal action will be taken against him,” said Trivedi.
She added Ardh Kumbh was going on in the city and everyone should cooperate with the administration and the MC. Circle Officer Chandra Mohan said the Municipal Corporation was being provided security during the anti-encroachment drive.
Trader Uday Ram Semwal, who supports the civic body move, said encroachment in marketplaces was a common sight in Haridwar and it affected traffic movement.
Ward Councillor Aman Garg said encroachment was a major issue which adds to congestion in the city.
The anti-encroachment drive is being carried out across the civic periphery ranging from Har-ki-Pauri markets of Moti Bazaar, Upper Road, Bhoopatwala, Khadkhadi, Shiv Moorti Chowk, railway station stretch and Kankhal. Corporation sanitation employees have been facing difficulty in cleaning the drains and nullahs due to encroachments.
You must log in or register to reply here.
Similar threads
Under I-T lens! Even a Rs 2 lakh deposit can land you in trouble
Jharkhand: 4 Villagers Killed, 40 Injured In Police Firing Over NTPC Land Issue
The Land Given To Hema Malini For A Song Belongs To The People
The Bollywood Music Director Who Bought A Forest Land To Keep Humans Out Of It
My right to get land for dance academy: Hema
Share:
Facebook Twitter Pinterest WhatsApp Link
Top