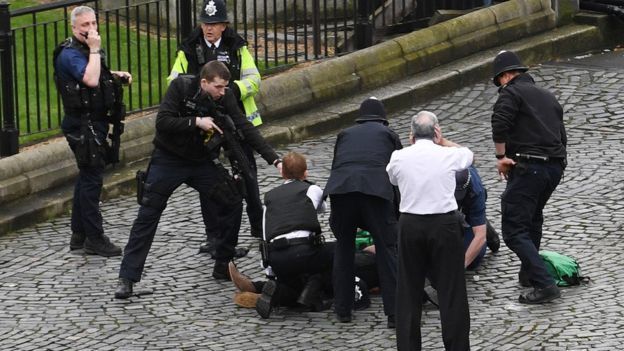 Four people, including an armed police officer and a man believed to be the attacker, have died in a terrorist incident near the UK's Houses of Parliament, Scotland Yard has said.
One of the victims was among several pedestrians hit by a car on Westminster Bridge, before it crashed.
An officer protecting Parliament was stabbed by an attacker, who was shot by police.
At least 20 people were injured, including three other officers.
Acting Deputy Commissioner and head of counter terrorism at the Metropolitan Police, Mark Rowley, said a major terrorist investigation was under way.
He said the attack started shortly before 15:00 GMT when the car was driven over Westminster Bridge, hitting and injuring a number of members of the public and the three police officers, who were on their way back from a commendation ceremony.
Mr Rowley said after the car crashed, a man armed with the knife "continued the attack and tried to enter Parliament".
Witnesses say there was what appeared to be a warning shout and then the crack of three or four shots before the attacker fell to the floor.
Foreign Office minister Tobias Ellwood - a former Army officer whose brother died in the Bali terrorist bombing in 2002 - attempted mouth-to-mouth resuscitation of an injured police officer.
Prime Minister Theresa May is to chair a meeting of the government's emergency Cobra committee later.
Speaking ahead of the meeting, a Downing Street spokesman said: "The thoughts of the PM and the government are with those killed and injured in this appalling incident, and with their families."
Metropolitan Police Federation chairman Ken Marsh said: "We offer our deepest sympathy to the family of the officer who has died. This incident shows the dangers our colleagues face on a daily basis."