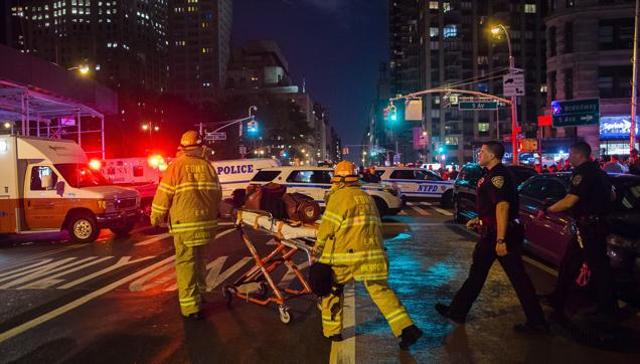 An explosion rocked the Chelsea neighbourhood of Manhattan on Saturday night, injuring at least 29 people, authorities said, adding that they are investigating the blast as a criminal act not immediately linked to any terror organization.
A law enforcement source said an initial investigation suggested the explosion occurred in a dumpster but the cause was still undetermined. The head of the New York Police Department’s special operations division said on Twitter that a “possible secondary device has been located” in the same general area

Live updates:
10:30am: Police combing the area around the scene of an explosion on Saturday in Manhattan’s Chelsea neighbourhood found a pressure cooker nearby connected to a cell phone with wires attached, CNN reported, citing law enforcement sources.
Mayor Bill de Blasio said early indications were that blast was intentional. He said the site of the explosion, outside on a major thoroughfare of a fashionable enclave in one of the most bustling areas of New York City, was being treated as a crime scene.
But he said there was no evidence of a “credible and specific threat” to the city. “We do not see a link to terrorism,” he added.
“It is too early to determine what the incident was caused by. We believe it was intentional. A full investigation is under way.” 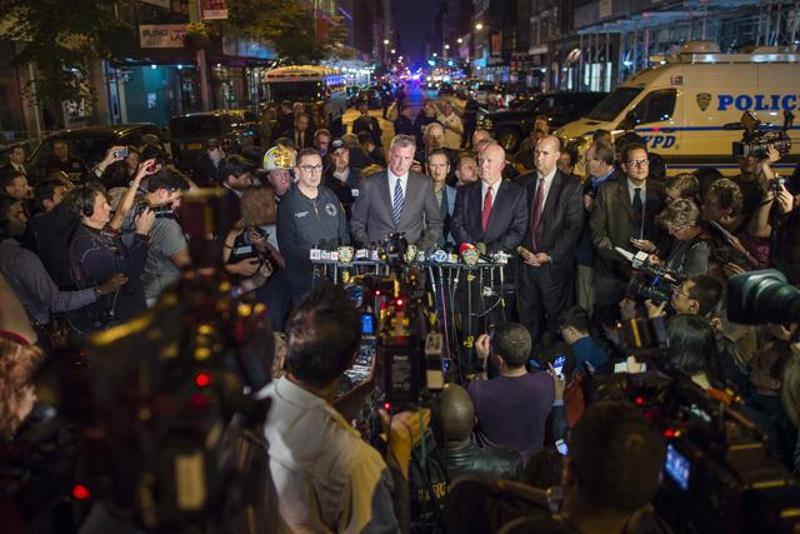 US President Barack Obama, who was attending a congressional dinner in Washington, “has been apprised of the explosion in New York City, the cause of which remains under investigation,” a White House official said. “The President will be updated as additional information becomes available,” the official added.
A US official said the Joint Terrorism Task Force, an inter-agency group of federal, state and local officials, was responding to the blast.
The task force is also investigating a pipe bomb that exploded earlier on Saturday in a plastic trash can along the route of a charity road race in the New Jersey beach town of Seaside Park. No injuries were reported in that blast, which authorities believe was a deliberate act.

‘Deafening’ explosion
At least three people were seen being taken away from the scene of the Chelsea blast in ambulances, but the severity of their injuries was not immediately clear. A car seen driving through the area had its rear window blown out.
The blast occurred at about 8:30pm (0030 GMT on Sunday) between 6th Avenue and 7th Avenue on 23rd Street, a major east-west thoroughfare in the fashionable downtown neighbourhood of Chelsea, Donald posted on Twitter.

The explosion, described by one neighbour as “deafening,” happened outside the Associated Blind Housing facility at 135 W. 23rd Street. The facility provides housing, training and other services for the blind.
Hundreds of people were seen fleeing down the block on a cool early autumn evening, as police cordoned off the area.
“It was really loud, it hurt my eardrums. My 10-year-old boy was sat in the back seat of the car, and the explosion blew the back window out,” said Tsi Tsi Mallett, who was in a car driving along 23rd Street when the explosion took place. Her son was not injured.

Neha Jain, 24, who lives in the neighbourhood, said she was sitting in her room watching a movie when she suddenly heard a huge boom and everything shook.
“Pictures on my wall fell, the window curtain came flying as if there was a big gush of wind. Then we could smell smoke. Went downstairs to see what happened and firemen immediately told us to go back.”
New York City Police issued a bulletin advising motorists in the area that they should “expect extensive traffic delays and emergency personnel in the area of 23rd Street and 7th Avenue” due to police activity there and asking the public to avoid the area.
You must log in or register to reply here.
Share:
Facebook Twitter Pinterest WhatsApp Share Link
Top